Rollin' On The River... Burton-On-Trent, England!

Miss Rona didn't allow me to go the full distance, within the constraints of this ongoing mess I made my day to Burton-On-Trent work because I could! Metro engineering works tried to derail those Staffordshire travel plans, that Birmingham Starbucks fix gave me life as I made my way to my CrossCountry service! Yes, I like beer but I loved the history that Burton had to teach me, B! 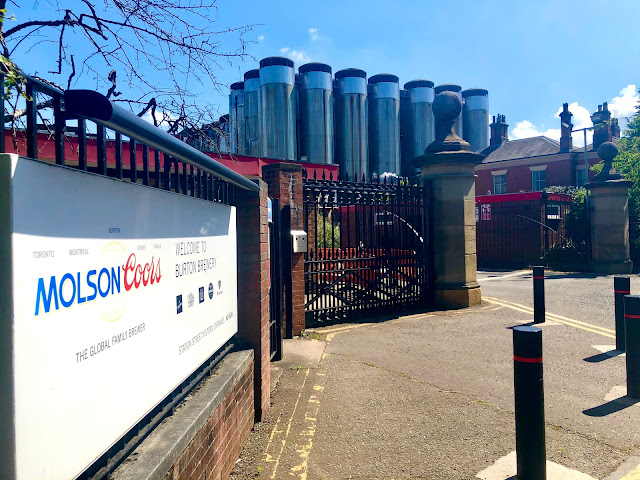 Why Burton? After scrolling through Twitter I saw a view of the Trent River. That social media snap had me curious, learning that Burton-On-Trent served more breweries than anything else, I was sold! Stepping from my on-time CrossCountry service at Burton Station, I saw those breweries and brewers houses with all of that 18th century charm. Had I walked into a beer drinkers paradise? Absolutely! Schooled by the informative 'National Forest' heritage signs, since the 17th century Burton has been known for its favourable location with an abundance of sources that has allowed the production of its own seriously famous Great British beer. Sam Allsopp and Ind Coope & Co were the first beverage pioneers to open their breweries in Burton-On-Trent, England. In Coop & Co weren't local, those Trent waters had attracted them from their London location to Burton-On-Trent! Sam and Ind both opened a line of shops and enterprises aside from their brewing operations, they didn't mess about when it came to beers!
As I walked along Station Street I saw those breweries in their growing numbers, were they all working? I didn't know that, one brewery that looked active was the Molson Coors Brewery. A commercially geared brewery it looked like from the outside, I was getting the feels of Willy Wonka's Chocolate Factory with those factory type gates that were present before my very eyes! Known for primarily brewing 'Carling', I noticed a whole host of brand logos were presented on the 'Burton Brewery' sign. Aside from 'Carling', I saw that 'Cobra', 'Doom Bar', 'Coors Light' and 'Worthington's' to name a few. I saw a door that was signed 'pedestrians', did they do brewery tours? No bother, I had my own plans! Burton-On-Trent had its history with its many period houses and former breweries but it was refreshing to see the town was still getting those coins from beer and that alone! I was getting those 'Brewing Vibes' for sure! The weather was glorious, the dramas of the morning earlier on had left me, where's my pint of Bass! Brew on Burton! Go! 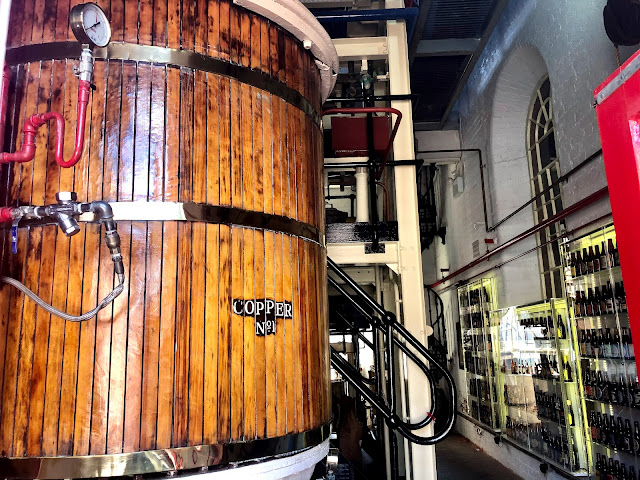 Time was most certainly on my side, walking from the train station revealed Coopers Tavern on Cross Street, I had reservations booked for a little later on that day. Forging ahead, I found myself at Burton's own National Brewery Centre because I wanted to find out the facts about the town's own hustle with the famous Bass & Co. The buildings that now house the museum used to be the 'Bass Engineer's Workshops', which serviced the three Bass breweries and many other malthouses in the town with a whole host of trades on offer to Burton's beer economy. Surrounding the 'National Brewery Centre' I was schooled about the other former malthouses and the magistrates court that was an architectural first. Riding on time, I started my 'self-guided' tour to find the main exhibition warehouse to be empty, I wasn't mad about that at all! I wanted to know 'Why Burton?' 1882, you'd say was a golden year for British beer production? I wanted receipts! Monks had been brewing their own beverages in the Abbey? Some holy brew?
Those 'Trent' waters had brewers from all parts of Great Britain flocking to Burton to open breweries because that river provided the perfect water for making beer. Minerals for the gods! Proud Burton, keep that beer a brewing! Burton's position along the rail network gave the town those 'Distribution Goals! With the opening of the 'Trent & Mersey Canal' in 1777, those brews could be sent to more parts of the country and to the Port of Liverpool. Those trains kept on coming with more wider expansion of the network allowing for the town of Burton to make those coins! Markets were getting wider and more nations were tasting the home brewed drinks from Burton! 18th century merchants set up shop in Burton to find that liquid gold, bridging the gap between the Port of Hull to Norway signified the boom of Bass ales and others going international! Worthington's who? I found my photo in the 'White Shield Brewery' building, where the 'East India Pale Ale' was brewed and then shipped to serving British troops in India. 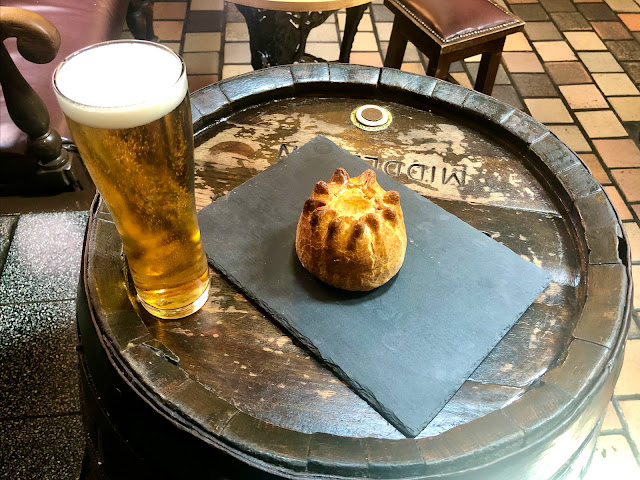 I'm not going to lie, I wanted to find a premier pub in Burton-On-Trent that served authenticity with a story to be told. After booking my train tickets and reservation for the Brewery Centre, I consulted the world wide web for some much needed pub wisdom. Coopers Tavern caught my attention without question, 'Coopers Tavern' had something that I wanted to see! With the third stage of the roadmap declared, the easing of the Lockdown allowed me to make another set of reservations, eyeing up those Facebook photos I was already hungry for one of 'Coopers' pork pies! The landlady, Amanda Addis helped me ensure my June reservations were made with ease, everything was set for my Burton pub experience. Arriving before time, I had the my table ready but I expressed I was looking to find more out about the pub. With that said, I was afforded the chance to sit in the raised corner of the bar-room, I was informed that I was sitting in the Brew-masters corner. Feeling suitably thirsty, what would I be drinking? Beers can be Vegan? Christ!
I had to say, the Coopers Tavern served all of its 18th century charm. Originally owned by the William Bass, Coopers is now a Free House/Tap House as part of the Joules Brewery. The former Brewer's House had me feeling as if I had been transported back to a simpler time, I'm sure a much simpler time! My pork pie was delicious, I enjoyed every bite along with my Green Monkey English Craft Lager. I won't tell you a lie, like I said before! That pint was knock out tasty, the landlady Amanda has recommended that I chose that unpasteurised brew without hesitation. In that moment, I felt the culture and history of Burton's past with Coopers Tavern, it was an education for sure. Taking a little walk around the tavern had me schooled once more, a very important landmark decision had been deliberated in the snug room at Coopers Tavern. The whole feel of that important decision-making space felt very atmospheric, I was impressed with that history lesson. Bass and Joules negotiated that deal well! Take a chance on Coopers! 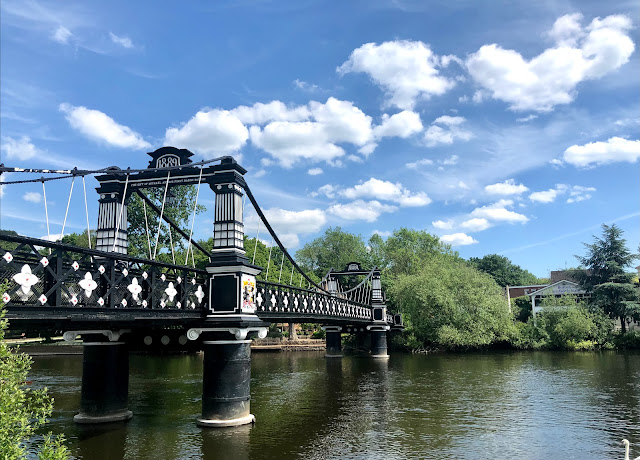 The Trent River had been the reason why I had chosen to visit Burton-On-Trent that June afternoon. After seeing such a lovely photo on Twitter by chance, I booked those train tickets as mentioned at the top of this blog, I just couldn't say no! I made my way down to the Washlands after my pie and pint at Burton's Coopers Tavern. It was a reasonable walk on down to the lush green-space that bordered both the town centre on one side and the Trent River on the other. The weather continued to be gorgeous, I felt blessed by the intense rays of sunlight that shone down on me! The riverside came into my view, the Ferry Bridge looked just the same with its black and white 18th century style, I had my fourth and final element of the day for this blog. I marvelled at the bridge with a sense of completion, it was great to see people going about their leisurely business across the bridge in both directions. For 131 years old, Burton's Ferry Bridge served 1889 Realness with its intricately painted style. The Trent River had a lot to answer for!
As mentioned before, due to Burton's world class Trent River water, the high mineral content had made the beer some of the best in the country and even further afield. In one direction was Stoke-On-Trent and in the other would Hull, of course those barrelled brews sure made their way down the Trent waterway from Burton to their prospective destinations. The Trent River looked clean, the question stood, do they still use the same river water to make beer in Burton to this present day? I'd like a receipt for that question! Rollin' on the river for the first time since my 2019 visit to NYCs Hudson River in the USA, I felt a sense of deep gratitude for Burton-On-Trent! Making those brews from day dot, I can definitely see Burton-On-Trent carry on with their brewery journey well into the distant future. Finishing up with a Bass like tasting pint at 'Brews of the World' on Station Street, I enjoyed my final drink of the day before taking the train back to Birmingham. Burton gave me the best day out in a long while! Pure normality for once!
Brewing It Up!
Joseph Harrison