Ukraine joined the Eurovision family in 2003 during my first ever year watching the song contest. From their debut in 2003, to their first victory in 2004 in their second year with a song by 'Ruslana' in Istanbul Turkey, the journey continues to serve utter craziness! I will be seeing which five entries by Ukraine have made 'My Eurovision Song Celebration' shortlist! Співайте! 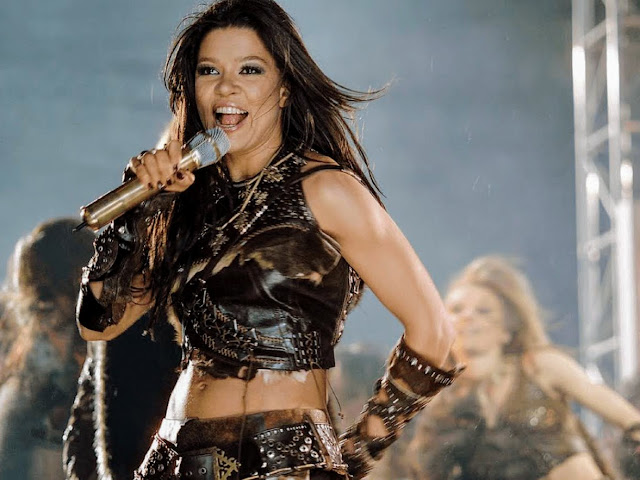 Just maybe I was going crazy because when 'Ruslana' took the stage in Istanbul, Turkey at the Abdi İpekçi Arena, I was not ready for what Ukraine had in store! No! Dancing around like a woman who had lost her mind, 'Wild Dances' served a berserkly captivating and fabulous 'cavewoman' spectacle for Europe and the rest of the world to see. Gooped, I lived for 'Ruslana's' strong vocals and ability to throw herself across the stage for three minutes whilst singing live. I did not understand the Ukrainian words in the song but her leather ensemble served a 'sexy leather Flinstone' energy, I was half expecting a pterodactyl to fly across the stage because the category was 'Pre-Historic' Realness! Only being my second ESC, I wasn't bowled over by the other competitors, the host country's entry wasn't very good but I was living for Ukraine's high energy entrant, the song was upbeat but also packed several punches with the Eurovision 'gimmick' executed perfectly! My 14 year old self knew that the only way would be Eurovision!
The core of 'Wild Dances' by 'Ruslana' was predominately in English, suggesting the song was about dancing together with a fellow 'cave-person?' Such lyrics 'I want you to want me', suggested that the 'Pre-historic Age' was coming to a devastating end? Напевно, даремно Була я надто чемна? Fear not, that Ukrainian script translates into English to 'Probably in vain I was too polite?' 'Ruslana's' tepid advance may have explained her enraged approach to her lyrics? Coming back with a frantic Ukrainain war cry in the form of 'Для тебе, для себе Застелю ціле небо!' Clearly 'Ruslana' was feeling some kind of way with this English translation into 'For you, for yourself I will cover the whole sky! Those lukewarm moves were followed by a strong comeback that suggested she was going to fight for her man that she had given mixed messages to, the sky was hers to capture! Ukraine served it mighty fine during that 2004 Grand Final, 'Ruslana' left Turkey victorious, bringing Eurovision to Kiev in 2005! UKR, those 280 points!!! 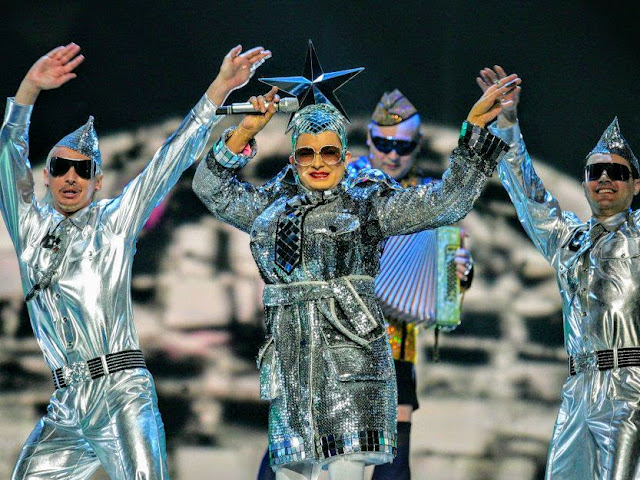 2007 brought the Ukrainian Nana, 'Verka Serduchka' to the Grand Final of the Eurovision Song Contest at Helsinki's own Hartwall Areena. Dragged up in such a style, 'Verka' was a living disco ball as she marched around her backing dancers and band throughout her number! 'Dancing Lasha Tumbai', now what does that even mean? I didn't care because I was transfixed by 'Verka's' fabulously camp performance! 'Ruslana' had brought 'cave-woman' Realness but that 'Dancing Lasha Tumbai' Drag extravaganza was something else entirely! Ukraine's own Drag Comedian belted out her song in English, Ukrainian, Russian and German because she wanted to! Her backing dancing waved their arms in the air just like they didn't care! Born 'Andriy Danylko', I definitely saw pieces of 'Ginny Lemon's' own 'X-Factor' audition some years later! If truth be told, whenever I picture 'Ginny' singing anything Eurovision, I know they are channelling 'Verka's' 'Dancing Lasha Tumbai!' Ukraine brought the Drag, this is the Eurovision!
From 2007, I am going to fast forward almost one decade into the future because 'Jamala' had something to say! In Stockholm, Sweden at the Globe Arena, '1944' was the powerful entry by Ukraine's 'Jamala. Written by 'Jamala' herself in English and Crimean Tatar, it was the first song to take the winning spot with the language being a Turkic one. '1944' went deep into the deportation of the Crimean Tatar people, taking place during the 1940s, the happening was at the hands of Joseph Stalin. Taking place in the former Soviet Union, it was undeniably clear to see that 'Jamala' had a lot of passion, upset and anger to release during her winning performance. Of course, this entry by Ukraine was one of Eurovision's many entries that touched on a politic subject. From that point on, I was going to understand a lot more about the political element of the Eurovision Song Contest. Russia obviously had something to say about this performance but 'Jamala' knew what she wanted to say and she did that unapologetically! 2013? 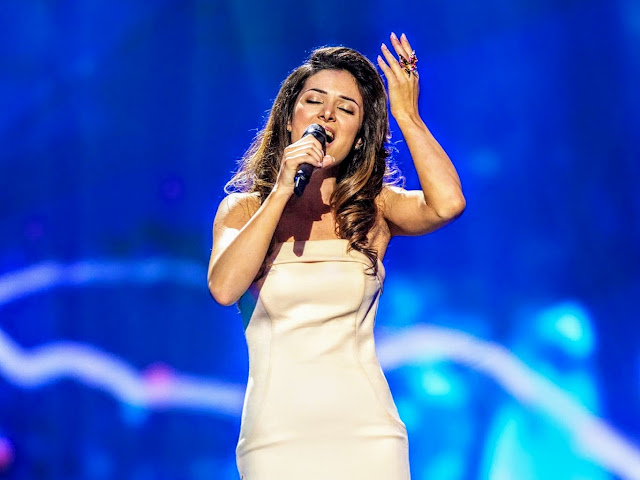 'Zlata Ognevich' lit up 2013s Eurovision Grand Final without a shadow of a doubt! Lifted onto her podium by a Ukrainian giant, 'Zlata' took me to another dimension with her goddess like performance of 'Gravity', the video to the song had me feeling as if her song was the official song for the Avatar films. 'Nothing comes from dreams but dreams' those lyrics had me feeling as if my dreams would be as magical as this entry from Ukraine. The dry ice and subtle use of a wind machine had me living for this heavenly three minutes of Eurovision gold, forget those Disney Princesses because 'Zlata's' natural beauty almost had me calling Disney to make a Ukrainian princess! With her swishy movements from her podium, I was all for this slowed down yet powerful Eurovision entrant! Her vocals were strong, the lyrics like a fairytale and as I have said before, 'Zlata's' beauty was incomparable to another other competitor that 2013 Grand Final! When I go to Zhangjiajie, China, I will keep this song in my head beside the Avatar mountains.
2020s Eurovision Song Contest had to be cancelled due to Coronavirus, the Ukrainian entrant 'Go_A' had to shelve their original song, 'Solovey'. Making their way back to Rotterdam in May 2021, Ukraine's entry took to the stage to completely mess with my head! 'Go_A' returned to the competition with 'Shum', meaning either 'Forest' or 'Noise'. Making it through the Semi-Finals, 'Go_A' took the main stage at the 'Ahoy' with the lead singer wearing two wigs on her shoulders. The colour of her accessories were the same colour as 'Orville The Duck!' The whole song was in Ukrainian, the lead singer bounced around their part of the stage with a manic nature, serving an energy that I had never seen before on the Eurovision stage before! My friend Andy, who was watching from Kiev had said that people in the Ukraine were rooting for 'Go_A' and with national pride they were adamant that Russia would get nul point! Needless to say, the Ukraine will be one of those countries that I will watch out for! More 'Verka!' Dancing Lasha Tumbai!!!
12 Points Goes To... Ukraine!
Joseph Harrison