Finally, I wasn't forced to walk around deserted streets no longer! Cautiously returning to Birmingham one week after 'Indoor Dining' had been reintroduced, I wanted to experience some much needed normality! Taking the West Midlands Metro for the first time since September 2020, it felt like I was stepping back into life! Birmingham, I'm just going for a walk... Finally! 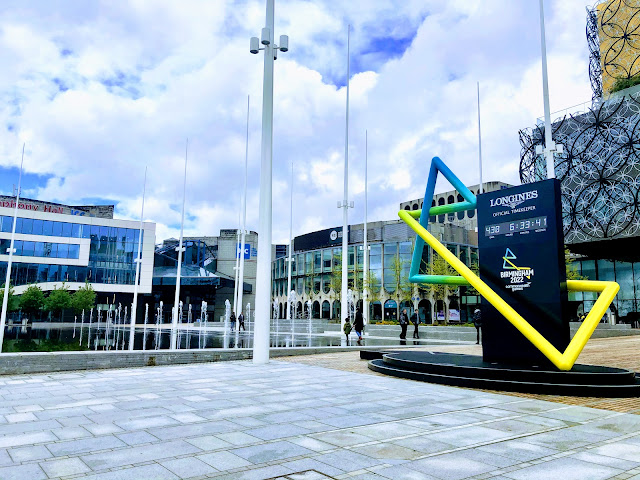 Alighting at Library/Centenary Square to see a brand new familiar view, still a partial construction site I did see. Through new eyes, I luxuriated in that snatched moment of normality, believe me when I say it was an absolute pleasure to be rediscovering the ever changing Centenary Square. With a conviction that was like solid concrete, Birmingham's Centenary Square had many things to showcase with an air of 'European Cool!' Maybe that freedom had all gone to my head? No, the first part of that walk down memory lane had me feeling appreciative that our 'new normal' looked pretty 2019 to me! Making the big countdown to the 2022 Commonwealth Games, the elaborate timer stated the Second City had 430 days until Birmingham 2022! In those first moments of freedom, I walked around the new looking water feature with a sense that every step walked was one closer to a brighter tomorrow. I don't care how mushy my words sound, 2021 so far has been an absolute wash out, I'm ready to live!
The Library of Birmingham looked sharp, shining in the on/off sunshine with its status well proclaimed, this house of books shines bright! Construction of the Paradise development hadn't ceased, scaffolding and cranes were still present as Birmingham's newest wonders are being completed. The Coronavirus Pandemic never stopped construction, Birmingham is bouncing back and snatching more anchors such as HSBC opening its largest UK HQ outside of London. Arena Central was getting did, the developments that had been boarded up during my last visit were now shining in that 2021 moment! The opportunity that was bestowed to me that day didn't go unappreciated nor unrecognised because hell I was thankful to be back out again! Moving forwards, I made my approach away from Centenary Square with a sense of accomplishment. I loved that I was able to step off the Metro in the heart of Westside, direct from Bilston! The progression that stood in front of me, it gave me hope for Birmingham! Yes, B! 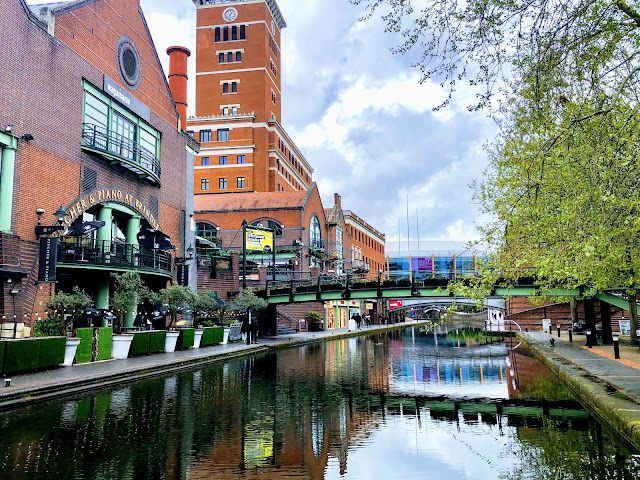 Flashback to the Summer of 2020, during that period of 'are we in Lockdown or not?' Me and my Mum walked from Darlaston to Birmingham along the Walsall and Birmingham Canals, it was a long walk but after around 30,000 steps we ended up in Birmingham near Brindleyplace. Fast-forward to May 2021, technically the 3rd UK Lockdown was still in place with the third step on the 'roadmap to freedom' unlocked, a sense of hushed normality stood before me. The canal-side in-between Brindleyplace and the International Convention Centre gave me those early Summer vibes for sure! It was an absolute pleasure to see life coming back and nature keeping the rain back for that photo opportunity. Brindleyplace wasn't on my radar, I was cautiously keeping my 'social distance' so my tracks stopped as soon as I saw the view that I wanted to capture. The newly renamed 'Utilita Arena Birmingham' was in my view, it looked like it was ready and waiting to host events and welcome back people to the canal-side playground. Rona!
No marathon like walk would be completed that day, my fifth instalment of 'I'm Just Going For A Walk...' would focus on four segments that weren't far from each other. From the canal I was looking for some lunch, breakfast didn't happen that Monday. Before my lunch, I turned around to head back up the stairs that would take me to street level with Broad Street. It had been a road that I had walked down countless times during my university days, during that 2021 moment I saw that the tracks for the soon-to-be Westside Extension were ready and waiting for the trams. Another sense of completion washed over Birmingham's most notable party street, I did wonder how will the staff deal with those late night revellers once they've had a scoop or two to drink? Now, that was the million pound question! If I could have that sense of progression in my own life? Birmingham, I wasn't joking! Anyway, the calm Birmingham canal-side took me back to a calmer time. Maybe a beverage at Brindleyplace next time? I don't like making reservations! 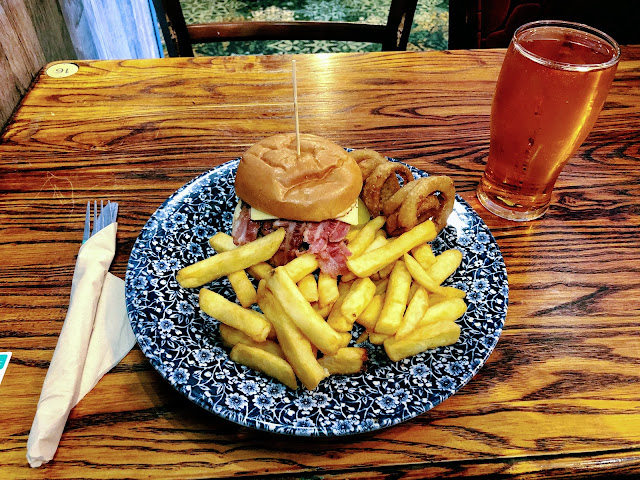 Ready with my 'Track & Trace' NHS APP, I scanned into Broad Street's own 'Figure Of Eight' Wetherspoon's for my first indoor meal since September 2020. I had delayed my Birmingham trip because I had no desire to eat outside anywhere, the weather in England plays games and I didn't want my first meal out for an age to be rained on! No! Choosing the week after 'Indoor Dining' had been re-introduced, I chose Wetherspoon's because I didn't need to make any reservations in-advance. I found my table, took off my mask once I had sat down and perused the online menu on the Wetherspoon's APP. Clocking my table number, I was able to pay for my meal and drink without any cash or cards messed about with at the bar. I really liked the whole table service routine, I made my order through the APP and was served not long after the payment had been processed. I'm not sure what good the perspex partition did? Miss Rona would still infect people with the virus regardless, hanging plastic sheet or not! Get out, Rona!!!
My pint of Magners Cider tasted like liquid gold, I savoured every drop of that much deserved alcoholic treat. I wasn't looking to get drunk, I purely wanted to enjoy that single drink without any need to become intoxicated. That isn't me speaking, I am sure? No! My bacon cheeseburger was my chosen meal, it was served with chips and onion rings. No, it wasn't fancy cuisine but I enjoyed the fact I was out of my house and sat inside a pub! It was that reality check that such a normal pastime felt really special because those aspects of life had been taken away from us during the Lockdown, well three of them! I was content with my meal, my one pint of Cider was more than enough. The fact I had to scan a few APPs and wear my face mask if I wasn't sat down really didn't bother me, it was a small sacrifice for me to experience my rare post-Lockdown outing within the law. I respected those rules because at the end of the day, they weren't rocket science to understand and I am not a fool! It was time, I progressed to the final part of the walk. 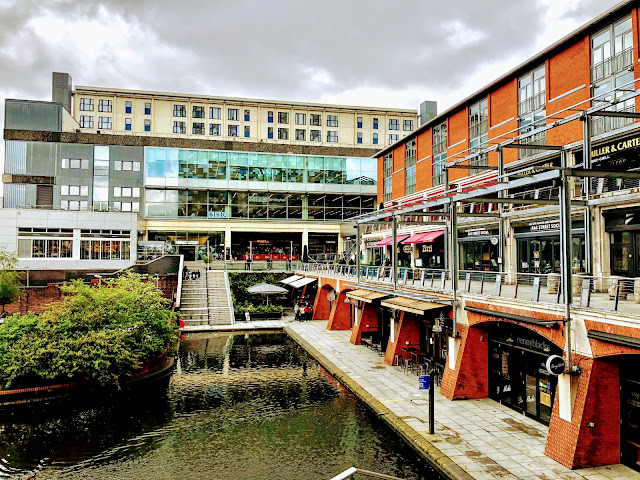 Purposely choosing to walk down Granville Street, I was looking to revisit a time during those student days of mine when I lived in Birmingham. The same apartments appeared on the left-hand side as I made my way past Travelodge Broad Street. I was getting tones of yesterday, back when I would have navigated the shady street that led to my Halls of Residence. The same familiar questionable looking tower block still stood to see another day, that view always gave me the creeps. Moving on, I found myself fronted with Holliday Street, the development had been completed at long last, so many new apartments stood where derelict site had stood during those years of student life. Yes, I saw 'The Maltings' standing in the same place that it had, during 2019 I stayed in Birmingham on Boxing Day with a view from above. I looked down over 'The Maltings' from the Hotel Indigo at the Cube, 2021s view was up close and personal with the Pandemic in mind. Lockdown as a student? No, thank you very much! Oh, The Mailbox! Oh, B!
I had originally thought about getting a Starbucks drink because I hadn't had one since I was in China, being well before the New Year in 2020 but something told me not to do that. My walk past the Gas Street Basin gave me life, yet again it lifted my spirit to see people getting back to life even if the restaurants hadn't all reopened. Walking through The Mailbox was lovely, the last time that I had done that was in December 2019 when I was en-route to Turtle Bay and my night out in the Gay Village. It had felt like an age and to still be in England felt even more strange, I really need to get back to my life overseas! Birmingham's Westside walk had given me a lot of life back, it reinstated some hope in my life, things are on the right track at the moment. Seeing Centenary Square getting its facelift was amazing, the Metro extension has nearly been completed and parts of Granville Street looked new! Birmingham during that 2021 moment sure redeemed itself, I had seen the city with a renewed sense of love! Miss Rona, get up and get out!
Brummagem, I'm Back!
Joseph Harrison