I needed a change of scenery and a new bank of ideas for my blogs. An impromptu visit to Brewood in South Staffs gave me the inspiration that I desperately needed. With a few days away from Bilston I was able to recapture those Summer walks that had gotten me through 2020. From expensive houses to the Shropshire Union Canal, Brewood's village centre chilled me out. 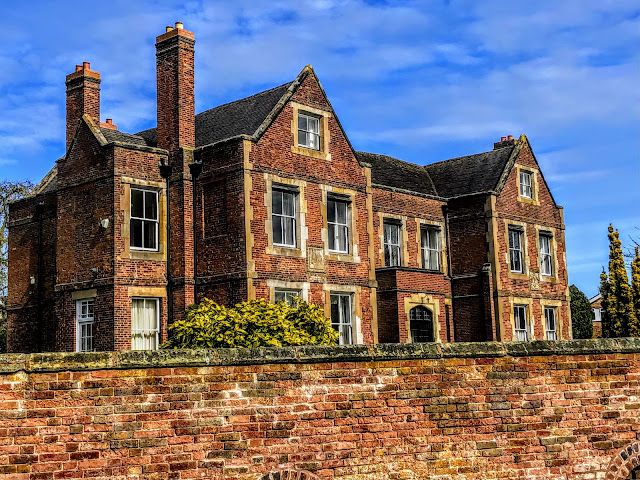 Brewood may be a small village but it has a wide variety of houses and homes, from Housing Association to grand manor like houses. Brewood has a homely feel to it, the houses reflect that feeling because people take an actual pride in their environment. Sure, the sights and delights in Brewood look fancy! Picturesque most definitely! Bilston and Brewood may start with the same letter but that is where the similarity for housing begins and ends, it is always a tonic to see such contrasting views. My Auntie and Cousin live in Brewood, their house is a normal two bedroom Housing Association house, it serves them perfectly for what they need. On the other end of the spectrum, the residence that has been captured above leads to the other side of Brewood. There's no difference, each property stands to house people for a common reason, its just style and the rest of it. Yes, my walk that morning had started well, I had no complaints. 'Sandy Lane' had served some period feature houses, I sensed those houses were expensive. Yes, those high prices!
As I walked down 'Sandy Lane', that took me closer to 'Chillington Brook' so a change of scenery would be the category for the morning. 'The Pavement' served something else, I must admit it is truly where the other half live! Turning towards 'Dirty Lane' those residences served something else, the back gardens maybe small but those balconies looked perfect for drinks on the deck! I am not a snob, nor would I say the people of Brewood are but those high spec properties, it gives off the illusion that the locals are from a different class of people. Now, let me tell you a known secret, the Education Secretary, Gavin Williamson lives in Brewood! Not that I actually care that he lives in the village but it would be interesting to what fancy abode the tax payer is footing the bill for? That is a question I would like to be answered! After his ill-handling of the school closures and technology poverty, with a residence in a place like Brewood I am sure that his children never had an issue with their online learning if that was the case for them? No, Gavin! 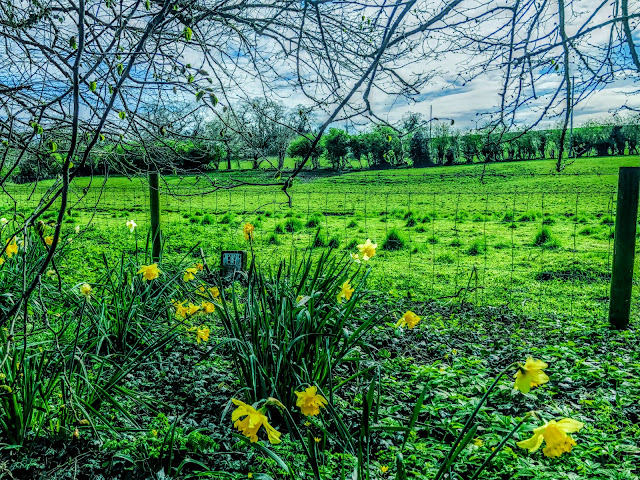 During my walk the previous day I had no idea that I was going to publish the fourth part of this series in Brewood. During my previous walks I hadn't taken any photos with the intention to blog about it, taking some time to make some notes was the deciding factor. Backtracking by 'The Pavement' I saw the fields that overlooked the grand Brewood manor house that I featured first in this blog. The green fields had me snapping away with my iPhone, Spring was in full bloom with the yellow tones of the daffodils flowering all around. It was the first time in a long time that I found myself actually caring what photos I had captured, it's not been the most eventual of years for sightseeing. The vibe in Brewood is always friendly, people will always give each other the time of day, that is something that I have to get used to. As I took my photos, two people who were locals asked me if I had the photos that I had wanted. They asked with kindness as the core of their intention, I replied with much positivity, I had some great photos.
In Bilston people don't give each other the time of day, it isn't something that we value but in Brewood, people make polite exchanges because they live a different way of life. Those people didn't need to converse with me as I walked past them, but their interaction was friendly and many other people in Brewood have communicated with me in a nice way. My Springtime walk so far had been really nice, it felt nice to have a purpose. I didn't feel the need to walk past the Parish Church because I wanted to walk towards a farm that I had past several times before. The previous 'I'm Just Going For A Walk' followed my walk around Bilston with a diversion down the cycle track. The scenic greenery of the photo captured above made for no comparison with the littered and partially vandalised cycle track. These blogs have helped me process the environments that I have seen during the third and hopefully final UK Lockdown, I feel Brewood chose itself with ease. With pastures green and flowers in bloom, Brewood looked beautiful! Go! 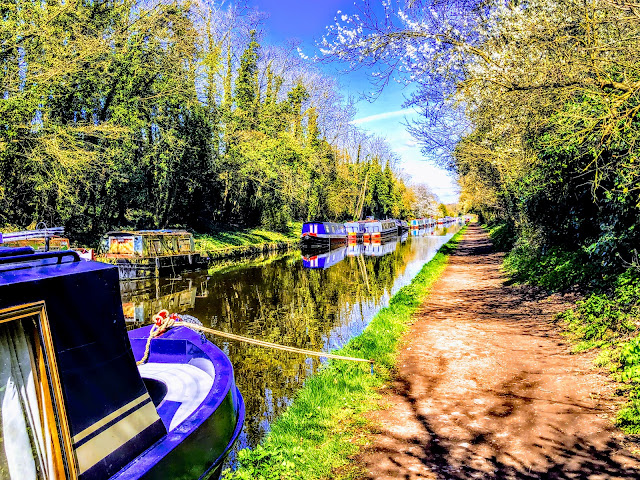 The weather that day continued to be so very nice as I walked towards the Shropshire Union Canal. That area of canal had been somewhere that I had really enjoyed walking during the Summer of 2020, the countryside scenic setting made the towpaths look quaint and just as lovely like before. The pub above the bridge allowed me to hear actual life other than the birdsong in the air, the pubs had been reopened for outdoor dining that April day. It was a tonic to hear some normality in the air, I eavesdropped on a conversation where one of the ladies had gotten her hours back at a nearby pub. Her spirits seemed high, her livelihood would be back and that sounded so positive. The canal boats alongside that Brewood section of the Shropshire Union Canal looked especially bright that afternoon, most of them designed to a high spec were peoples full time homes. I don't know whether living aboard a canal boat would be for me? I don't think so, that's if I am completely honest. Regardless, the vibe along the canal was right!
Unlike my previous walk down the Brewood canal towpath, I did not feel the need to walk any further up to the next bridge. Turning back not long after snapping the photo that's been captured above, I proceeded to walk back to the village. I knew where I wanted to walk and along country lanes was not the one for that day. The canal boats looked beautiful in the sunshine, comparing with the Walsall Canal it was another contrasting view. Brewood knew that I needed that scenic walk in the sunshine more than ever before, during that moment I didn't have any idea about my return to China. The distractions thrown at me during that day were welcomed in the best way! Would I be indulging that afternoon? No, I didn't want to drink anything alcoholic, leaving my bank card in my bag I wanted to stay away from pubs because I had reservations booked for the following month. I don't know when I'll be in that part of town again, that canal-side view was enough for that moment. When will I return to Brewood? Soon, I am sure of it! 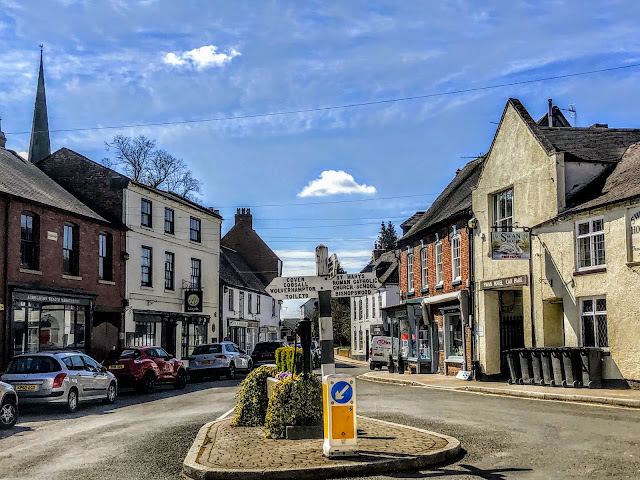 Leaving the canal towpath behind me, I walked along Bargate Street where I saw 'St. Dominic's Grammar School'. Brewood absolutely possesses an 'upper crust' feel, the placing of the 'grammar school' fitted well within the village situation. I noticed how much the tuition fees were, that's when I thought about dear old faithful 'Education Secretary' Gavin Williamson because I'm sure my Auntie had said that his kids went to that fee paying school? Maybe, so? That wasn't important but it was because how dare he stutter in Parliament then in the next moment not being able to maintain eye contact when his rights were being read. His kids wouldn't have understood the hardships that children from lower 'socio-economic' backgrounds had to go through whilst their schools remained closed. I'm not a threatening person but when it comes to poverty in the United Kingdom, I would love to give folks like Williamson a piece of my mind! Where did that honestly come from? Dianne Whatcock and I need to cause some chaos!
Where was I? Oh, yes! I remember now! I was standing outside of the Staffordshire Grill with a birds-eye view of the village circle in Brewood. The sunshine was glorious and life had started to resurface. The easing of the third lockdown could be seen in Brewood but due to lack of outside space the Staffordshire Grill remained closed in that moment. The feel of the village gave me a sense that I could have been in the original series of 'Postman Pat'. Brewood's character filled centre gave me the perfect illusion that the post office looked just like the one that 'Pat' used to pick his post from. This last section might seem like I have lost my mental faculties but I said what I said! Much like the pub, I didn't need anything from the post office so I walked back down 'Sandy Lane'. The walk that I had embarked on had showcased Brewood's charm in a whole new light. I saw the same place through a Springtime view. I look forward to my next visit to Brewood, I am sure the same sights will impress me much one again! A 'Hello' costs nothing!
Brewood In Bloom!
Joseph Harrison