During the UK's first two Lockdown's I didn't do a lot of walking, I was all about dodging the public because some were acting the fool! As 2021 rolled around my mental health had taken a type two nose dive, I needed to get out and about! Yes, those West Midlands factories had me thinking I was in some kind of Black Country Museum? So here goes, I'm just going for a walk.... 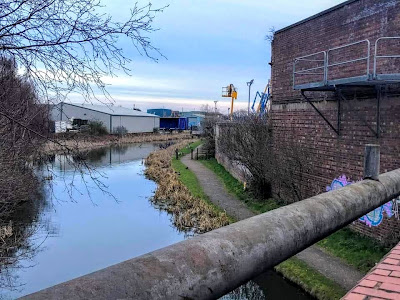 What's 'The Black Country Museum?' Hold your horses, all good things come to those who wait. They truly do! I had found my pace, with my letters to post worldwide I had twigged that the Post Office on Victoria Road in Darlaston used the perfect stamps! Switching that walk, I decided to walk through Willenhall to Darlaston, then arriving home within a respectable time and grossed step count. It really didn't occur to me that I could blog about the seemingly normal 'Black Country' walking route, well I had a stroke of genius! I sensed the rich industrial history that the area near Darlaston had seen and still possessed, had me feeling strangely proud. Don't ask me that question again, no! So, in Dudley they have lovingly created a series of concept period buildings that represent a time that is now years gone by. Known as 'The Black Country Museum' that West Midlands attraction had me clocking those famous urban waterways. Hold up Venice, we've got more canals than your showcase Italian city possesses! Let me school you!

Walking towards Darlaston along the Willenhall Road, I found myself paying a moment of reflection with the Walsall Canal as my muse. No, we don't have gondolas because in the West Midlands we used those canal narrow boats and horse pulled barges even further back. I had done some walking down that stretch of canal from Darlaston to Walsall Town Centre between the first and second UK Lockdown's, as the months had passed and the winter had me freezing I didn't give the canal much thought. That 2021 reminder gave me a second to appreciate the urban waterways of the Walsall Canal. Not exactly the Yangtze River with New Shanghai as its backdrop, for every day back at home during this period of geographical displacement I am learning to appreciate what lies closer to my legally documented home. As dusk started to draw in, I felt a sense of clarity as I looked over on to the canals waters. Yes, I have officially lost my senses but I wasn't mad at that Black Country vista. I wish that I could let myself love my home! 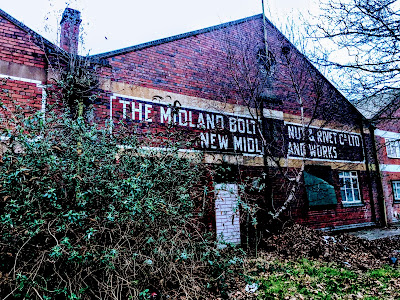 Please allow me to explain why I am using 'Black Country' as place name, since Queen Victoria's visit to the area during her reign the name stuck. Victoria, former Empress of India made such a remark about the sky being so full of smog and fumes from the factories and steelworks, she referenced as to how it looked like a 'Black Country'. Fast forward to present day, I found myself taking a closer look at the factories along Bentley S Road and Richards Street. I first took a second glance at the former Imperial Works, they served me with a picture as to how the area used to be a possible workhorse for the Darlaston area. In a visible state of disrepair, it really didn't look all that industrious for the former Imperial Works. No, with that former factory looking rather sorry for itself, there was a certain mystique about the derelict state that it possessed. I was being served a slice of Darlaston's own version of a 'Peaky Blinders' scene. Would I find some life still? I just needed to keep on walking down the road. Let me see, where?
Richards Street allowed me to see a row of factories that gave me a view of modern day working life and one former story. Those factories that continued to trade were producing things that I didn't know, sure the world will still turn but it was nice to see some activity occurring, still. Frankly, 'The Midland Nut & Rivet Co Ltd' as part of the 'New Midland Works' caught my sight. The wild-looking foliage that covered the disused former factory gave me a definite serving of 'Urban Decay!' Was I feeling a moment of 'Hometown Glory?' Maybe, just so! After my walk, during this period of writing, I searched the function of the former works. Something about 1937 gave me the impression that said bolts, rivets and nut metal works had been produced during an earlier time? Regardless, the old sat beside a sense of renewed business because the cogs of industry still turn on a daily basis. Why had I decided on that walk to take such photos? Usually my phone is just used for the step count, it was nice to be distracted from those digits! A choice! 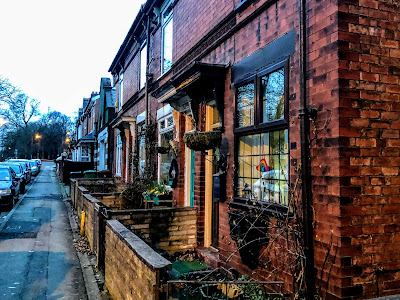 As my step count neared 14,000 or so steps, I found myself walking past the 'Victoria Road Allotments' area that can be found off Richards Street. I wasn't satisfied with any photos that I took through the fence, if truth be told I was more worried about dropping my phone. I had the fright of my life, I thought a person behind me was shouting me, in the end he was mistaken and the situation was harmless. I honestly have to say since I came back to England for a visa and passport change back in August 2017, I haven't truly felt safe in England. That person had no negative or anti-social intent but my usual China backdrop would be equipped with bulletproof CCTV and a sense of civility, I never need to look over my shoulder but at home its so different for me. Anyway, the brick-houses that lined the slopped section of Victoria Road had me interested, I loved that period wartime style that served a certain personality without any questions needed to be asked. Regaining a sense of security, I enjoyed the view once again. OK?
My walk up until that point had been swift, I had McDonald's on my mind because the franchise at the Crescent in Willenhall accepted walk-in takeaway. For that reason, I pledged I would walk the route the opposite way a few days after that Darlaston moment of enlightenment, I had a plan! Walking uphill towards Darlaston Town Centre, the period looking houses that lined Victoria Road had me thinking, which time period had the houses been built during? I am sure that I saw 1935 or 1936 on one of the houses? I imagined if the original first homeowners had been wealthy or not so well off? That was a question, I wasn't banking on getting an answer for that. Would I want to live in a house like that? If I am honest, I haven't lived in a conventional house since I came back from China, it has always been a modern style apartment for me. Even still, even if those houses along Victoria Road may have not been for me, they were right for the current inhabitants. That step count was getting a lot, I was ready for my evening meal, WS10! 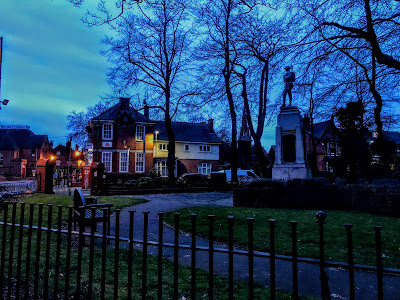 I was stopped in my tracks dead, I felt compelled to take the above photo on the corner of Slater Street. I had not seen that part of Darlaston Town Centre during the dusk/early evening period before. With Darlaston Post Office in good view, I was able to see that ordinary part of the town centre look quite extraordinary for that one time moment. I questioned my mental state, the view pleased me and for once picturesque and Darlaston were being used in the same situation! Heaven actually needed to help me during that occasion! Regardless, the War Memorial looked nice, things had a quaintness about them with the Victorian looking buildings that acted as an absolute contrast to the nearby Rough Hay Estate. Aside from that early evening epiphany, I had used the Post Office as my reason to leave the house. That branch of the Post Office used smaller stamps, for my Chinese written addresses, they were handy to allow me maximum writing space for the bilingual arrangement with telephone numbers in mind. Oh, Darlaston had me thinking!

My second half of that 17,000 step walk concluded in Darlaston Town Centre as the final focal point. The stillness of Victoria Street had me feeling calm, I didn't see many people about and for that reason it felt good. I wear my mask according to the government guidelines whilst I am inside supermarkets and other places that I have needed to visit during Lockdown 3.0 that have been deemed essential, others haven't. Leaving Darlaston Town Centre behind me, I walked down the remnants of Darlaston High Street. I did see one 'Artisanal' looking coffee shop that I hadn't seen before that March 2021 moment. I hope the business survives the lockdown because it looked more in line with the vibe of the Town Centre. So, the second half of that walk been narrated through photos, the whole experience had me feeling refreshed. I had never seen so much to photograph before in such an area before! Darlaston has been through it but I was served some unexpected views as I made my way back from Willenhall. Where to next? McD's!!!