For the fourth edition, 'Life's A Drag' has been told it can 'Shantay' which means it can 'Stay!' Make no mistake, during 2020 and 2021 as the pandemic continues to rage on, the phrase 'Bedroom Queens' has been taken to another level! Yes, Drag extends to a former first U.S family and the five ladies who started off as 'Wannabes!' I'm not joking! Girl, how orange do you look? 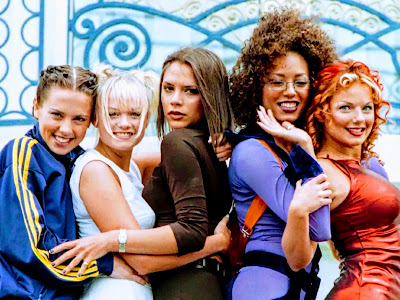 During the mid to late 1990s, five young ladies caused a music 'earthquake' with their debut single, 'Wannabe!' Known as 'The Spice Girls', the British press took it upon themselves to name each band member with a nickname, with clever marketing and a sense of humour, the girls made their names. Left, 'Sporty Spice' embraced her football tops and tracksuit bottoms, serving backflips and stunts galore! Moving further right, 'Baby Spice' made those blonde bunches into a hairstyle many girls wanted to replicate, her pastel coloured dresses gave that band member an innocence. Pouting with her sultry scowl, 'Posh Spice' played up to her critics by not smiling at all, her statement bob and black Gucci dresses impressed me! Further to the right, adding something Leeds was 'Scary Spice' with her statement brash humour and leopard print styled outfits. Finally, at the furthest point right stood 'Ginger Spice', her iconic dyed red hair played up the fact she's not actually ginger and the Union Jack style dress that was made from a tea towel!
'The Spice Girls' went on to become the symbol of female empowerment, coining the phrase 'Girl Power' that they used as their mantra throughout their time as a five-piece band and beyond. How does Drag come into the mix? I could labour this point all day and night long! Each member of the band served their own look and trusted within its brand power, they stood by it and embellished the mantra of the band. Yes, the music gave us that cultural sensation with their catchy tunes but their commitment to their roles as the five 'Spice's' allowed us to be a part of the journey. The element of Drag had use seeing those persona's lived out with energy, high kicks and ferocious peace signs! 'Girl Power' gave us something that we recognised, those five trademark looks embodied what we remember and still see to this day, even a football top and tracksuit can become iconic! For me, I knew as a child who each 'Spice Girl' was, the attention to detail had me living for each member of the band! Of course, Drag can be served by girl bands! 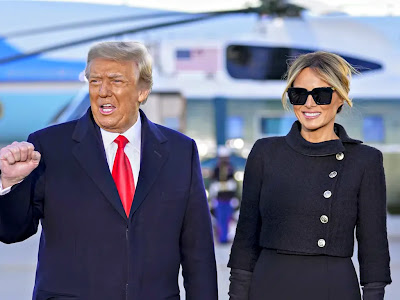 As you have probably cottoned on, I am not an American! So, the family that I am about to mention has no political value to myself as a British citizen. Believe me, the UK has enough to deal with the motley crew that are already currently in charge. Anyway, known for his tangerine orange spray tan and 'MAGA' slogan, allow me to see how Drag has influenced the White House during the Trump years. I'm not going to get political because that wouldn't be wise, but who allowed Mr. Donald J. Trump, the former President of the USA to become so very orange? Known for his wavy off blonde questionable hair, he would have us guessing if it was actually a hair-piece? His memorable looks had me intrigued, his musical choice gave me a few laughs as he attempted to dance to 'YMCA' by 'The Village People' during his campaign for the '2020 Elections'. As a song associated with the Gay community, it really made me chuckle as DJT remained committed to his cause! Donny served his Drag like he meant it! Keep it orange DJT!
I'm not going to let Mr. former President have all the attention on the main-stage, no chance! Putting America first with her 'fashion' during the Trump years had to be Mrs Melania Trump, the former First Lady. Her looks were out of this world and if nothing else, she used her platform to showcase her many designer looks. For the inauguration weekend that took place in 2017, Melania Trump sashayed alongside her husband in a collection of American made dresses. Her stand out 'Jackie Kennedy' inspired 'baby blue' number had me taking a second look, I am not a fan of the last administration but the sense of style that the Slovenian born then First Lady had my attention. Throughout her time as First Lady, Melania Trump always had her eye on her looks, as a former fashion model it was really interesting to see her garments forever co-ordinated for the occasion. Right till the very end of the Trump years, even Melania Trump made sure her final outfit popped, then her maxi-dress on arrival! There's Drag in the White House? 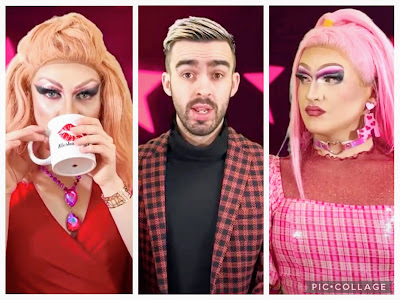 The impending doom of 'social distancing' has forced queens far and wide to take their looks back to their 'bedrooms!' With more time on their hands than they were originally banking for 2020 and the beginning of 2021, 'Two and a Half Queens' collectively rose from the perils of furlough. Bringing their truth and shade regarding each episode of 2021s 'RuPaul's Drag Race UK, Series 2'. As the title suggests, 'Alesha Tryed' (left) and 'Bondi' (far right) serve as the reigning queens of this honest and funny YouTube topical 'Drag Race UK' weekly show. Sat in the middle is 'Rob' (centre), a rose between two thorns? I'm not sure A & B would agree with that? Oops! Yes, Rob is there to give his honest opinions regarding the high and low points of the series from his own fabulous point of view. With Bondi's camera and green screen, she joined Alesha and Rob as part of their bubble for each weekly filming of 'Two and a Half Queens'. I have explained that because I am sure some people might want to say? Don't you lie! Call Boris then?
Alesha, Rob and Bondi can all agree that Birmingham's Gay Scene has many worthy contenders for future series of the hit 'RuPaul's Drag Race UK' edition. From 'Yshee Black' to 'Cycki Brokat', this trio have said it first that the West Midlands has a fine crop of Drag talent. Their weekly YouTube show is a scream, I love waiting it because its an escape from Lockdown life, each moment of each episode from the UK Race is covered flawlessly! No queen who is currently on the race is safe from Bondi's comments, but she's serving her truth with a sense of love. Rob believes that 'A'whora' opened up a lot after the Essex 'Morning Glory' challenge, he's very much a stan! There's plenty love for 'RPDRUK, Series 2' icon, 'Ginny Lemon' because these 'Two and a Half Queens' definitely 'Fancy a Slice!' They're so proud of Gin's performance during their time on the race! Like me, it is wise to kick those Lockdown blues by watching 'Alesha Tryed', 'Rob' and 'Bondi' each Sunday! Watch out for 'Series 3' and a potential 'Eurovision' project soon! OK?
Don't You Dare Mention... H&M!
Joseph Harrison