Miss Rona might not be paying my bills but I am still keeping an eye on that trick, trust! Understanding the differences between my life in China before the pandemic to this life that I'm currently living in England, where would I really rather be? Should the Police be our friends? NHS, vaccinate for your lives! Ms. RuPaul Charles told Miss Corona Virus to Sashay Away! Go! 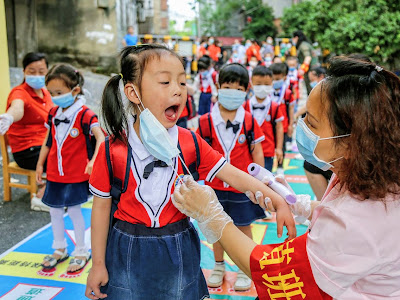 On the 8th of March 2021, the United Kingdom saw children of different ages resume their school education away from the home. Boris Johnson could cross off the first part of his 'Road Map' out of lockdown, for how long will these new measures become an everyday thing? Real talk, the whole homeschooling gig has been so mismanaged with some families missing out due to Wi-Fi and computer poverty. Getting our kids back to school has always been the working people's objective, did those in the private sector face such inequality during their homeschooling odyssey? Miss United Kingdom, come on henny! Educate those children, hunty! These children needed to be schooled regardless of their parents financial and social situation! I for one absolutely loathed my school experience, having the opportunity to study at home would've been a dream of mine! But for those young people who have suffered during this period, their mental health has deteriorated during this third and hopefully final lockdown. OK?

We never pre-empted that our students in the United Kingdom would have to wear masks, we did not! In China and other countries in Asia, people wear protective face masks as a precautionary measure even when there's no pandemic calling. I noticed on my daily walk on the 8th of March 2021 that those primary school children were not wearing masks! Children in China have been wearing masks across educational settings as soon as those Mainland and Hong Kong & Macau schools reopened. The smallest of primary school children in China have been wearing masks without any fuss, captured above in the image from a school in China's Hunan Province. The daily temperature check was a daily measure in my previous kindergarten, long before the pandemic that started in 2020, my former kindergarten nurse would simply take the children's temp without any fuss. Why aren't we checking those temperatures and implementing masks for our young learners like they've done in secondary schools. Boris, look East! 快,快,快! 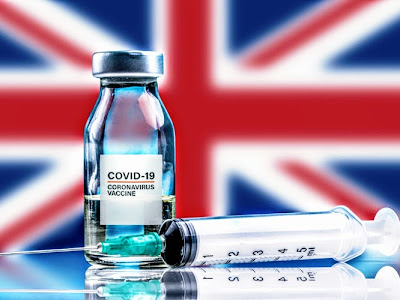 The UK Government have flailed and bumbled through the debacle of their handling of this pandemic, throughout 2020/2021 the coveted vaccines have been the talking point. With the lack of expertise the team at Downing Street have thrown some serious cash on the homegrown Oxford/AstraZeneca Vaccine. It has been meticulously tested and devised by the scientists in Oxford, England. As Christmas passed us by, we had the Pfizer BionTech Vaccine approved by the MHRA but really want I wanted was the domestic vaccine to be approved. As if luck had it, just as the UK went into Lockdown 3, it was a blessing for the Oxford jab to be cleared for use. The gull of the Health Secretary to force a tear out on ITV's Good Morning Britain, it was a choice! I am sure the NHS key workers had seen distraught families genuinely cry their hearts out during their last potential iPad conversation before their COVID stricken loved one tragically died. The gull that MP had to show such a falsehood, crocodile tears! Get on your rocket! Now!

As the UK Government now love to lament about the current success of the vaccination programme, it begs the question why? The NHS are vaccinating for their lives, not the politicians or the Prime Minister! Countless health professionals have come out of their retirement to assist, dentists and also General Practitioners are giving their time to help dish those jabs out! The only reason 22 million people and counting have had their first doses within three months is down to the NHS not the bumbling messes that make the most important decisions for the country and the Union. Straight up, I owe my deepest thanks to the NHS because without those Key Workers, nobody would've been working in the wards nor vaccinating everyday! I want my vaccine but as a young person with no pre-existing health conditions I have to wait, I am all about getting that Health Certificate soon! I will not forget the tireless work those scientists contributed along with the volunteers because they've helped get the UK vaccine ready! Jab me! 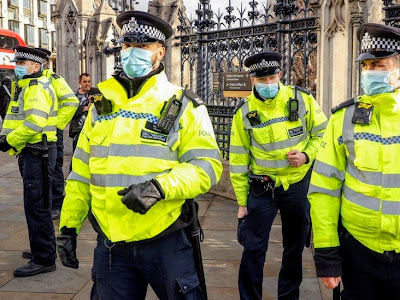 Before I move onto a lighter topic, I want to serve some comparisons regarding the Police Service in the UK and then from my experience in China during the pandemic. I started 2020 in Beijing, China as it was placed into the lockdown that eradicated the virus, I didn't have any run ins with the Police but I did come into contact with the 警察 in Old Peking! I remember going into the city for the final time before I returned to the UK, I happened to be walking from one subway station to the other when I was reminded in Chinese to put my mask on. I had honestly forgot to put it on, if truth be told the fact my glasses steamed up really didn't make me want to wear it. I complied with no malice towards the Police/Security Guard. In the United Kingdom I heard on the grapevine that during the Summer period during 2020 that the West Midlands Police weren't going to fine COVID rule breakers because they didn't want to create any hostility. The Police aren't meant to be our friends, they are allowed to assert their authority. Not today!

The Police should be enforcing every single fine, coming down hard on those rule breakers during this pandemic! There's no time to be making little friends along the way! Absolutely, not! In China from 2015 to 2020, I abided the law because I am not stupid. I have always felt safe in China, the Public Security managed by the police always made me feel safe and at ease. Frankly, I would much rather be in China because I know where I stand and there's no narrative being pushed by the government to forge a friendship with the people. I'm more than sure that during life in China even after Lockdown, the Police are present to ensure things are orderly and those masks are being worn. People in the UK have been allowed to run riot whilst the Police have been told not to offend us. We've been allowed to lord it about, the Police have been told to be our friends, there's no precedence set for them to uphold law and order. I'd pay good money to watch the 警察 advise a UK Hun about mask wearing! Where's my popcorn and front row seat? 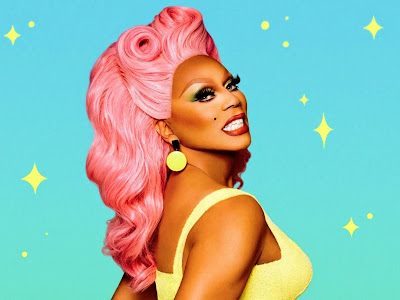 January 2021 meant it was a 'New Year, New Ru!' Proving that Drag is truly a 'Phenonmenon!' The legend, 'RuPaul' had been creating another two series of his International Drag Race during a world pandemic! She wasn't going let Miss Rona deny her legendary hopefuls their chance to slay on the main stage in the USA and the UK. The bomb had dropped in the UK, we knew that filming had to be halted temporarily due to UK's first of three Lockdowns, 'Ru' and 'Michelle' would be back before Christmas to get UK Series 2 completed. Whilst the UK battled on through the first Lockdown and the 'new normal' of the Summer and Autumn, the crew who were back in the U.S were finessing the 'Werk Room' and other parts of the Los Angeles set because 'Corona Couldn't Keep A Good Queen Down!' Season 13 hit our screens without any delays with its COVID safe methods and close knit bubble of 'Filming Crew and 'Extra Special Guest Judges'. Under COVID-19 conditions 'RuPaul' has served another stellar season of the 'Drag Race!' Go!
I had my dreams almost dashed when Lockdown 2 was announced in November 2020 because 'Ru' and 'Michelle' had just finished their quarantine time in London! The BBC had been granted permission to continue with filming projects, Series 2 of 'RuPaul's' Drag Race UK could finally be finished up! Fast forward to January 2021, it was a Lockdown treat to have both U.S and UK seasons play each Thursday and Saturday to cure that Lockdown fatigue. The UK queens had to deal with seven months away from the 'Werk Room' due to the Lockdown but 'Ru' had the COVID formula after sweating it out during the Summer. Both parts of the franchise haven't changed all that much during these Rona times but at the end of things, we still had the magic of the show! Clapping back to Miss Corona Virus, 'RuPaul' and 'Michelle' allowed us to 'Bing Bang Bong' along to the 'United King Dolls' after their Lockdown break during the 'RuRuVision' challenge! Flying off to Auckland, both R&M filmed the first season of 'Drag Race Down Under!'
Miss Corona Virus... Sashay Away!
Joseph Harrison