The truth is that I took my last flight this time one year ago from Beijing Capital to Manchester via Abu Dhabi with Etihad Airways! Within this blog I will be focussing on three very different flights, with one airline being remarkably different for many reasons. From Hong Kong's Cathay Pacific to the seamless Korean Air, I wasn't ready for DPRKs own Air Koryo! Yes, I flew higher! 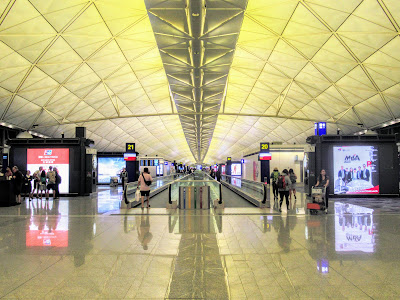 After a very hectic month of teacher training, I had clocked off for my Summer holiday at long last in July 2018! Hitting the ground running, I had arrived back from Wuhan the previous day to then pack my UK bound suitcase with haste! I was about to fly from Beijing Capital to Manchester, UK via Hong Kong with Cathay Pacific Airways. My Brother and Sister-in-Law had recently had their first baby in May 2018, I needed to see my first Niece for myself because photos and videos were just not good enough! No! I had been listening well, I checked in at Terminal 3 for my Hong Kong bound afternoon flight from Beijing Capital with my Mandarin Chinese skills applied. Making it through security, I found my gate with ease, T3 is no joke! Thankfully, my listening comprehension was plausible at the time because the gate agents barked the call for boarding in Chinese only. I was fine with that but was half expecting the announcement to be over the PA system and in some form of English being a HK airline? 是么?
The short flight down to HK was smooth, I enjoyed 'Thelma & Louise' as my film choice as I enjoyed the hospitality responsibly. Transiting through Hong Kong Chep Lak Kok International Airport was a piece of cake, the airport staff spoke immaculate English with a slight British accent in tow. Duty Free had me chatting with the staff as I made some purchases, the remanent's of Empire could be felt within the means of communication. My time spent along the concourse was cool, it all looked so modern and fresh! Boarding my Airbus A350-900 XWB model was an absolute dream, I had chose to travel to Manchester with Cathay to fly on their newest aircraft at the time. Soaring towards Manchester, I treated myself to the British food option whilst I watched 'Ferris Bueller's Day Off'. The crew were friendly, I asked for my photo and thankfully one crew agreed because some of them were very camera shy! Catching the landing into Manchester was fine, it had been a very smooth flight over from Hong Kong. 是的! 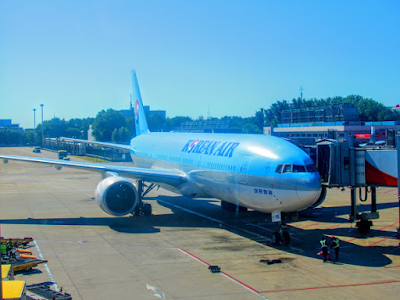 Cue October 1st 2018, I took my first ever international flight from Capital's Terminal 2 with Korean Air over to Seoul, South Korea. I was beyond excited, I had booked my trip to Korea with much excitement and the flight was all part of the experience. Being an 80 minute flight from Beijing to Gimpo International Airport, I wasn't expecting too much but I was more than pleasantly surprised if truth be told. Boarding was seamless, the Korean Air crew busied around the cabin and ushered the majority of the passengers into their seats so we could make our departure slot. I was fronted by my first Korean beauty, sorry ladies but that male crew member had me stuttering my words as he asked me if I was travelling alone. Did he know what I was looking for? The trip would definitely have a certain theme! Getting stuck into a Korean Drama before the plane left the gate had me making the most of the flight that would take me over the Yellow Sea to the Southern side of the Korean Peninsula. Being a celebration, I needed a beer!
The meal carts came down the aisle soon after the crew were released after takeoff, I was hungry! My Korean Drama was soo good! I loved my Korean chicken with rice very much! I had two cans of CASS Korean beer on that short flight, they got me in the party mood! I managed to finish the first episode of the series before the in-flight entertainment was disabled for landing. Disembarkation at Gimpo Airport was fine, my landing card was fine to complete although it did feel strange whilst travelling to not have any phone signal, that made things interesting. From plane to underground train I was able to keep the organised flex going. Fast forward to November 2019, I flew back over to Seoul Gimpo with Korean Air to be greeted by a BTS themed pre-flight safety video. The flight was equally as great, I had to use my Chinese language skills to help three Mainland Chinese passengers who were unable to communicate with the crew in English or Korean. They just wanted landing cards, I translated for them. 是, 外国人会说中文! 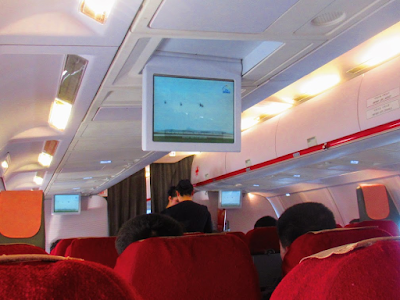 With my finances right, I was able to book my trip to the Democratic People's Republic of Korea for 2019s Chinese New Year celebrations. Arriving at Capital Airport once again, that time around felt different, I dressed in my best business attire to make sure I looked respectable. I was about to fly with DPRKs, Air Koryo over to Pyongyang Sunan Airport! I had flown to the Southern side of the Korean Peninsula only five months previous to that February 2019 moment, feeling tense I was still up for the experience! I felt a sense of relief after I had checked in, I noticed that several smartly dressed Korean people had the special Kim badge on their left shoulder blade. Meeting up with the other flight takers, we collectively had some butterflies about the flight and the whole experience that stood before us. Our stand was next to the Korean Air flight that was heading back to Seoul, did the two captain's wave from their seats over to their Korean compadres? Duty-Free? The returning North Korean passengers filled their boots!
Flying over from Beijing to Pyongyang would take the same time that it took me when I flew over to Seoul, that's where the comparisons would end. The aircraft was a Tupelov 204, boarding with my copy of the Pyongyang Times in English had me fronted with the immaculately presented Air Koryo crew members. The cabin interior boasted ruby red coloured seats, the aircraft itself wasn't exactly new looking but it would get us fine over to Pyongyang Sunan from Beijing Capital. Taking off eventually, the crew passed through the cabin with light refreshments and the infamous Air Koryo burger. I chose to drink some Cola, that cold drink reminded me of the cheaper alternative that's found in Lidl. The burger was harmless, it tasted fine but I wouldn't be finding out what type of meat that it was. The entertainment was an aerial view of the Wonsan Air Show. I took my time completing the landing card, I wasn't about make any mistakes! The North Korean family next to me allowed me to use their pen. Hello, Pyongyang!
Flying Scared? No!
Joseph Harrison