Don't be getting shady! No, actually it's OK! Philadelphia, Pennsylvania, USA turned a deeper shade of blue for that U.S presidential election recently! Talking about being shady, I want to serve as many forms of shade that Philly served during my 2019 comeback trip! Doing an overnighter from NYC was the right decision to make! Shade can be positive! Philly, I miss you! 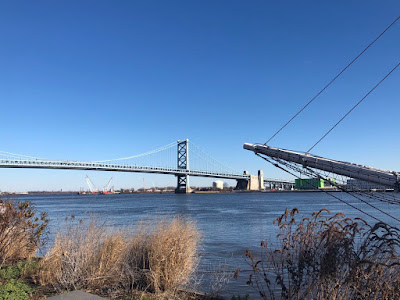 Experience has taught me to calm down, I had done my research before choosing Philadelphia over Connecticut! Time was of the essence during that 2019 East Coast, USA reunion trip, shade through my MegaBus pulled into Philadelphia like the city itself knew that I had returned! I had been the shady one during my initial visit to PA's cheesesteak inspired city, it has been one whole year, so don't start now! Sashaying down to Penn's Landing, I had abused that famous waterway back in 2012, I had a lot to make up! Philly was watching my every move and I was motivated not to have shade thrown onto me! I ditched the SEPTA because my own two legs were going to serve me well, I did not need no public transportation! Don't let me go 'Samantha James' on your Pennsylvanian ass! Honey, I paid dual attention to the Old City, that carelessness wasn't going to catch me off guard! Letitia Street had my food craving sorted, well just off that street I found an honest Sports Bar that sorted me out! With love, Philly knew I wasn't playing!
Following the noise, I made my way around the city like I had been there before! Of course, I had returned for a divine reason and I wasn't going to waste any of my precious time! I had spent seven whole years away from the USA, I had originally visited Philadelphia around April 2012. During that first visit I was a baby, just 21 years old I had no idea what I needed to see during that introductory day. Back in 2019, I had that returning state of mind, I did not take any wrong turns because that Liberty Bell still had the same tune! My chosen accommodation for the night was in a prime location that I had absentmindedly walked past in 2012 without a care in the world. Somewhere in the middle of Market St & 6th I had the urge to bid a Christmas wish upon a soul who wasn't having such a good time. Dishing a Benjamin Franklin because I'm kind like that, my good deed didn't need any thanks because I needed the good karma back! Telling it to the streets, Philadelphia was teaching me some life lessons and bringing out my kindness, Brit! 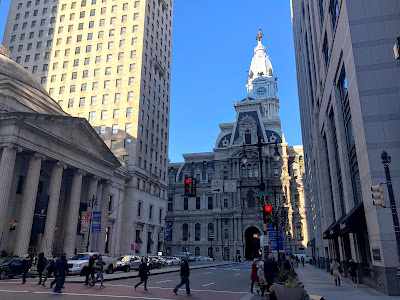 Christmas decorations make places look messy, those photos can't be used all year round! Dodging the Christmas tree that was standing outside of City Hall, I paid my attention to Philly's Center City because I had longed to serve Downtown Realness! Getting my ish together, the shade had been saved for later on that day! I lived and loved that Center City Philadelphia moment with much love, I had worked damn hard to experience that 2019 scenario! Philadelphia's central point just got me, I had the nerve to walk wherever I wanted to because those years in China had got me feeling sheltered! The air of caution had been blown out of the dark after I had walked into the Downtown District in Newark, New Jersey a few days previous to that shady moment! I was back, meaning Britney back and I wasn't going to let her ever go back in her Newark box! Venturing into the Downtown had me feeling all of those emotions! 2012 me wasn't ready, 2019 me had the game done right! Hear me won't you, Philadelphia! OK!
Feeling like I needed to do some shopping, I had forgot my smaller 'going out bag'. After clocking my map, I needed some light refreshment at a beer bar that was on the corner of what I needed! Refreshed with that pint of craft cider, it was off to Chestnut St with an intent and purpose to spend up that United States currency! I wasn't mad, I was living! How many servings of shade should I serve? Philly was just getting that engine started! Those designer brands were not impressing me much, Philly's shopping streets didn't have that juice! H&M didn't serve me but the lady who helped me with the door sure reminded me of my friend, Chanel! It was like an angel had been watching over me, that woman only said two words but she had the same demeanour and kind voice. I wasn't getting a kick in the chest from her! No! Getting lost within the state of mind that I had, the Realness of Philadelphia's CBD gave me that full circle moment in the best way! The shade came from the towering blocks but the weather was frosty! Freezing! 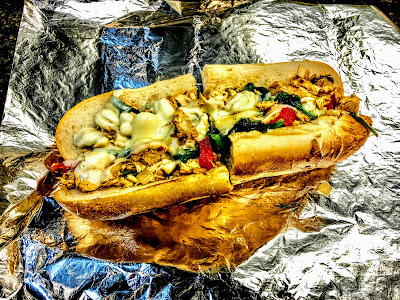 I'm an American? I wish! I cannot answer that question right now but my tastebuds answered with a resounding 'YES' as I tucked into my chicken cheesesteak sandwich. I had published a guest blog for an American tour operator during my student days after my Placement Year that had been spent in Newark, NJ, USA. Covering Philadelphia for that post I had done some vital research about Ishkabibble's. After I had checked into my hostel, it was time for me to hit Philly's South Street because I had chose Thursday night for a special reason. Back to that delicious piece of Pennsylvanian cuisine, I had taken my seat for that sandwich I had waited a long time for, well in years not in service time! I had never had such a tasty sandwich ever, the melted cheese had me in heaven without question! Thursday night wasn't just going to be poppin' at my chosen venue, no way! I was sitting next to three ladies who were decked out in their Ratchet Fabulous get up, eyelashes were freshly glued and one had her baby hairs laid! Go!
Casting my mind to a moment earlier that day, I am going to backtrack just a little to the later afternoon period. I had made sure I revisited Philadelphia's Gayborhood because I wanted to say 'Hellur' to Giovanni's Room! I had visited that kitsch bookstore during 2012, I had found Attitude Magazine, a Gay Men's magazine from out of nowhere that had me in my feelings! It was a read that was from England, being a fish out of water I wanted to read what was good in Mother England! Yes! 2019 did not serve me one single copy of Attitude but I did find a recent edition of a travel magazine that I appreciated. Back to South Street, those ladies were on their way to 'Trap Karaoke'. What in the hell was 'Trap Karaoke?' Needless to say I was caught up with the displeasure of a takeaway customer, she was not best impressed about the sub-zero temperatures in the small Ishkabibble location. It was December after all and the lady behind the cash register maintained that the cooks needed to breathe because those griddles were hot! 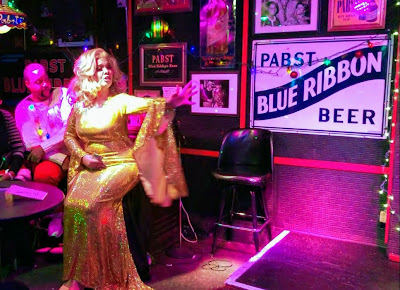 Throughout that Philadelphia guest blog I had to do some digging for myself, asking Willam from Rupaul's Drag Race Season 4 because that entertainer hails from the same city. What was good to do along South Street once the twilight hour neared? Willam suggested to me that Bob & Barbara's on South Street was a 'shit show!' Her words not mine! Choosing Thursday night because it was Lisa Lisa's Drag Revue, I had swatted up months before that December moment that I would need to arrive earlier, before the performers were even at the venue! Frozen to the core, I needed a hot toddy to warm me up because that December chill was no joke! Turning that hot beverage for a cold Blue Ribbon Beer and a whisky chaser had to be the one, it was a signature combo at Bob & Barbara's! I was letting go, I had been on a pretty strict schedule albeit my HighLine and Stonewall Inn hungover day after Jackson Heights. I was ready for the drag but was I really ready for the shade! Drunken hen parties will be read their rights! Oh the shade!
The drag continued as the drinks were poured, I turned to vodka and cranberry juice as the queens turned their looks and strutted to their numbers! No 'My Little Pony' hairstyles were served like I saw in Newark's Downtown! Category was opulence, I was being fronted by a whole new rage of 'Trans' drag and I was loving every single second of it! I didn't want to presume what the gender of the performer's were when they were out of drag because it was all love! I tipped my favourite queens favourably because my drunken ass didn't think about the taxi back to the hostel that I would need to take! I managed to get a selfie with the queen that impressed me the most! I tipped her more than well! It was just the best night ever, I felt that the world had left its problems at the door because the venue bore no hate! Was that the drink talking? No! 你不开心吗? 不在酒吧? I remembered that Chinese because that patron was looking salty! Why you mad? Philly followed me back to NYC, the hangover was the gift that I took with me! I'm shaded out!
Yale... Next Time!
Joseph Harrison