Here in November 2020, now comes the time for Miss Rona's final recipe. Encompassing the foodie memories that were made during my December 2019 USA trip. Stepping back to my week spent in NJ, NY and PA, I tried my best to recapture the flavours that I travelled 15 hours on a flight from Beijing, China. Miss Rona has not stopped me from executing any recipes! Too right! 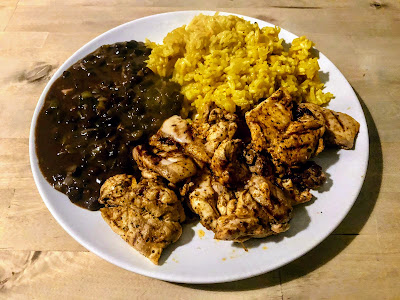 Miss Rona wasn't about to make me choose, I finessed those beans that I had tired to make a few months previous. Following 'Chef Zee Cooks' recipe, I made those 'Feijão Negro' like I had indulged at 'Ferry St Barbecue Restaurant' during December 2019. A known 'Churrasqueira' in the heart of Newark's 'Ironbound District'. Leaving those 'Ferry St' style beans aside, I made the 'Arroz Amarelo' with turmeric, paprika and all purpose seasoning that acted as my own 'Abodo' because we don't do that in the United Kingdom! Freshly marinating my boneless chicken in the 'Churrasco' mix with the help of a YouTube tutorial from 'BBC Good Food'. I used the griddle that I had access to at home. With my 'Yellow Rice' bubbling away nicely, those 'Black Beans' were chilling in the fridge as they had been pre-made the previous day. I got onto my 'Frango Churrasco' to take me from this Corona mess to a happier time, I just wanted to be gorging on that good 'Ironbound' food! My town doesn't know about 'Ferry St' foods, so I tried!
Those 'Beans' had been cooked with precision. I had followed the recipe to a T, finely chopping those onions and green peppers to ensure they would melt into the 'Feijão Negro' combination. I had been absent from Newark, NJ for seven years, 2019 was the year to return! The whole trip was blessed without any hitches, I believe that Miss Rona wanted me to gain some inspiration for this series that I had no idea about! Absolutely! Miss Rona knew that I needed that 'Ferry St' scran before she took her world stage! I'm not mad at her, she allowed me the opportunity to slip into the USA before their COVID bomb. Back to the food, I had that 'Frango Churrasco' sizzling away on the griddle. I was in pure food Ecstasy because those flavours mashed with my mind and tastebuds! The 'Feijão Negro' were dark, thick and sumptuous just like my former 'Churrasquiera' down in NJ! For a first attempt, the 'Arroz Amarelo' had me in a rice heaven, no lie! Cooked to a respectable level, the 'Frango Churrasco' took me back to the 'Ironbound!' Sim! 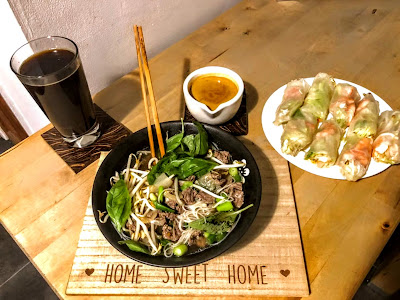 The prospect of spending my 30th birthday at home in England was becoming a real thing, embracing that eventuality I decided to try some Vietnamese to toast my new decade! I haven't been to Vietnam yet but it was a food that I had when I returned to NYC's own Chinatown in December 2019. Also I had enjoyed Vietnamese food much more during my 2012 NJ/NY placement year, the 'Pho 88' location had well closed by the time I made my Stateside comeback! Fearing not I found another place to bring that 'Beef Pho' back into my life! Finding myself in the depth of a second UK 'Lockdown', I was able to source the necessary ingredients for that meal. I had never tried making such a specialised 'Noodle' dish, I knew that it would be possible even though I had thought about abandoning those birthday dinner plans in 'Lockdown'. I would make those 'Summer Rolls' and my own 'Peanut Sauce' for dipping. 'Rice Paper' ordered and received, the deep bowl from eBay need to hurry up! Yesss, that Hermes delivery rode on time!
Playing by my own rules, I got my beef broth on the go! Cutting out some of the sauces because we don't eat 'Fish Sauce' on a daily basis. Steaming those deviled 'Prawns' with the quickness, I had some help getting those 'Summer Rolls' because I needed them to chilled and ready for the serving time! The 'Peanut Sauce' was quite easy, mixing peanut butter, chilli paste amongst other things I don't remember it was just a case of blitzing it all together into a nice nutty & creamy paste. Before my 'Lockdown' session commenced I made a cold homemade 'Vietnamese Coffee'. It was by no means authentic but it was a damn success considering I was in another 'Lockdown' situation. Sitting down to eat, I had my chopsticks because I miss those distant Asian days! I really enjoyed my homemade first-time Vietnamese meal. Would I make this meal combination again? No, I want to enjoy 'Pho' for real in Vietnam next time! Let's make it to Hanoi and Ho Chi Minh in 2022? I want to be serving Saigon Realness! Miss Rona, nuff time! 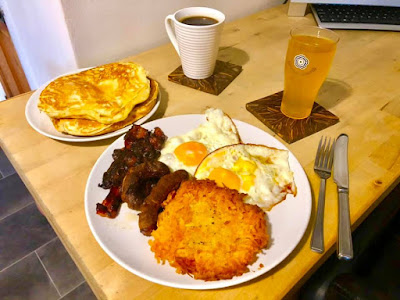 Casting my mind back to that beyond early morning, I took to those darken streets in Queens, NY. I was looking for the Denny's that was on my pre-5 am settings, that 24 all American diner had me finding it with ease. Ordering the 'American Breakfast', I wanted all those fixings! I didn't feature my super size breakfast because in the back of my mind I had a plan! Or was it another subliminal push from Miss Rona? Oh, I knew so! Still within that November 'Lockdown' funk, I had all my breakfast items needed to recreate that very unhealthy yet hearty meal! Firing up the stove I got my homemade 'Potato Rosti' on the go, prepping the 'Pancake' mix had to be done! 'Rosti' done, it was time to get the 'Sausages' and 'Bacon' sizzling in the best way! No messing, that big fat 'American Breakfast' needed all those calories and more! I had 'Pineapple Juice' that day but it looks more like squash in the photo because I forgot to shake the carton good beforehand! That less than 'American Coffee' was made to accompany the 'Juice'. Serving!
My 'Eggs' needed to be runny and sunny-side up! Taking extra time and attention, I actually made two 'Eggs' that resembled a closeness compared to the ones that I had served to me in Queens, NY! It was time to sit and eat my 'American Breakfast', of course I had managed to cook those 'Pancakes' well my Mom had helped with those! I won't lie! With all the fixings in place, I sat to enjoy my food. In that moment I was transported back to that early morning hour in Queens, I was about to embark on my second half of my Brooklyn expedition. The creation that I had made at home in England had me in my feelings in the best way! The weather was just as awful as it had been during that Denny's trip during December 2019. I didn't need to have it the same, I just wanted something that transported my tastebuds back to the New York area. Miss Rona had meant for me to visit Denny's that morning and to not feature such a meal in my comeback blogs from the Christmas trip before her Worldwide tour of death and tyranny! Rona! 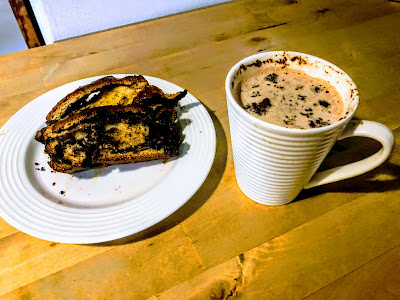 My 2019 trip to NYC, Newark and Philadelphia had allowed me to recapture certain neighbourhoods that 2012 had allowed me to meet for the first time, it was the second meeting with Brooklyn's Hasidic corner that had me baking for the gods! Lee Avenue had attracted me, set within Williamsburg in New York City's Borough of Brooklyn had opened my eyes to the ultra conservative Jewish enclave that served nothing but Hasidic Realness! I had done some more research before landing into the USA, I invested in a mobile sim that would allow me to find the area in question with the help of mobile data. With that data I had found Gottlieb's Kosher Restaurant. I had started things really early that day, being the same day that I had woken up at 4 am for my 'American Breakfast' at Denny's, I had some time to use in that Jewish Brooklyn neighbourhood. As the rain poured, I found a Kosher bakery. Stepping into that bakery I tried a piece of 'Marble Cake!' Choosing a warming cup of 'Hot Chocolate' had to be done! Oy!
Several months later I would be at my Grandparents house watching 2020s 'Great British Bake Off', it was 'Babka' week! What as a 'Babka?' After I had watched Paul Hollywood show the professionally made cake to Pru, I then realised I had enjoyed a wonderful piece of 'Babka' in the heart of Brooklyn's Jewish corner! From that moment on I had to make my own 'Babka!' With the help of my Mom, it was set that we would collectively make that Kosher cake! After mixing, proving and cooking the 'Cinnamon & Chocolate Babka' it was time to try it for ourselves. Settling down with two slices of the 'Babka' with a steaming 'Hot Chocolate' to drink, it was time for me to see if the 'Lockdown' 'Babka' tasted anything like my Williamsburg bake in the rain? If truth be told, the flavours took me back to the ultra Jewish corner of NYC! The warmth of the 'Hot Chocolate' blended perfectly, I was in Kosher cake heaven! The 'Recipes with Miss Rona' are now over, I hope to continue such a cooking series when I'm back in China! Rona, run along!
Recipes Over!
Joseph Harrison