Lacking in culture due to my extended return to the United Kingdom due to the Coronavirus Pandemic, I bring the fifth instalment of my recipes with Miss Rona! As the weather turned grey and cold, I needed the warmth and flavour of Puerto Rico to tell me the autumn into winter transition wouldn't be lacking in fuego! ¡Srta. Rona! ¡Necesitas salir! Really, Miss Rona! GTFO! 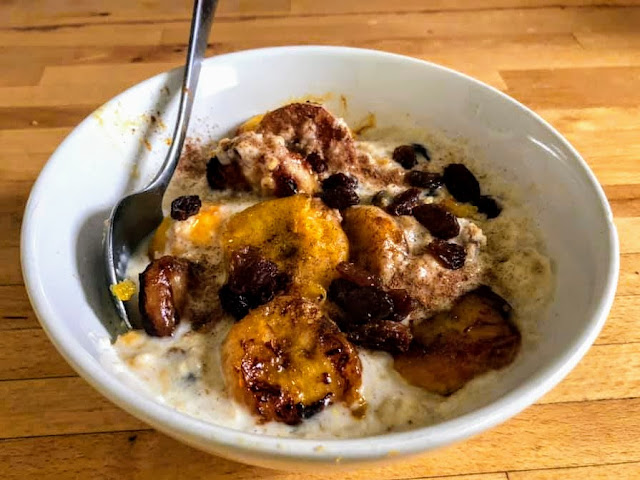 They say that breakfast is the most important meal of the day? If truth me told me and breakfast time do not get along, but one Saturday during October it was a match made in heaven! Schooling myself with the help of YouTube cooking tutorial videos. I found out about 'Avena!' That's Spanish for 'porridge' or 'oatmeal'. After watching carefully, I know that once I have my own kitchen and regular income I will definitely be making 'Avena' most days! Noticing that the Puerto Rican-American YouTuber added sultanas and ground cinnamon to her 'Avena', I knew that it wouldn't do me any harm! Over the last month I had got used to cooking Puerto Rican and Dominican foods, I had never thought about making a breakfast that didn't contain 'Platanos!' I could use 'Platanos', I had one spare from the three that I had bought at the time. I had educated myself about 'Platanos Maduros' they are deep fried soft plantain. Using some oil but not as much as I had before, I added some honey into the mix as I fried them off. ¡Deliciosa!
After the 'Avena' had been heated through in the microwave, I added a liberal amount of ground cinnamon along with some more honey because life hasn't been sweet during this 2020 COVID mess! Honey brown in colour, I added the 'Platanos Maduros' into the bowl with the said ingredients to taste for myself. The cinnamon, honey and sultanas brought a sweetness, whereas the 'Platanos Maduros' added a certain substance to the Puerto Rican inspired breakfast bowl. The milky smoothness of the 'Avena' worked very well with the whole combination of ingredients! Adding some Puerto Rican promise to my Saturday breakfast ensured I have another option to 'spice up my life!' Porridge doesn't have to taste dry or have artificial flavourings because 'el sabor de Puerto Rico' made those tastes much richer by far! OK, so I had originally wanted to make 'Arroz Con Dulce' but I had found my sweet rice like goodness already! I had a plan to add more 'dulzura' to this pandemic food post! ¡Una promesa cumplida! 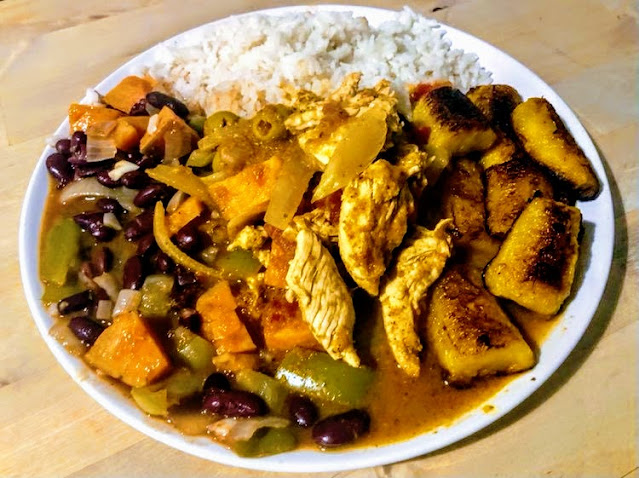 With a birthday in lockdown approaching, I said to myself that the whole of November would become a four week celebration of life! I was learning how to make different types of beans, from the Dominican Republic to Cuba with Puerto Rico in mind I wanted to challenge myself! Choosing 'Pollo Guisado', I was adamant that my English made Puerto Rican stewed chicken would have the same flavour as if I had made it on the island of the enchanted! Teaming PR and DR, I made some 'Habichuelas Dominicano' because this lockdown year has taught me that the culture can be brought to any household in any of the four corners of this world! The finished product was delicious, although I needed to finesse my chopping skills and that one can of beans was never going to be enough! ¿Estás completamente loco? A mistake made leads to a winning victory in time! Yes! Adding my own version of 'Adobo', I was satisfied with the homemade 'Sofrito' that I added to the mix! I had made quite a lot previously with the intent to freeze! OK?
Similar to before, my last remaining plantain had gone black. I used that softened 'Platano' to fry off slowly with some oil to ensure it was soft enough to melt in the mouth! Gloria Dios, the green pitted olives gave the 'Guisado' the perfect sourness, I also added some of the brine into the stew for extra flavour. Taking my time, I ensured that each component of the meal was made with time and care given. Serving my 'Pollo Guisado' with 'Arroz Blanco' had to be done because I have found that in Hispanic cooking, rice acts as the anchor that ensures all of the flavours blend together but keep their place at the same time! I might have graduated in 2014 from university but the food experience that I am currently on has schooled me beyond belief, it has been great to learn about something new again! Chowing down, I found myself back in that drunken state I was in during my December 2019 holiday to NYC. Srta. Rona, I saw my complete plate as an informal flashback to my Colombian 5 am plate from 'La Abundancia' in Jackson Heights, NY! 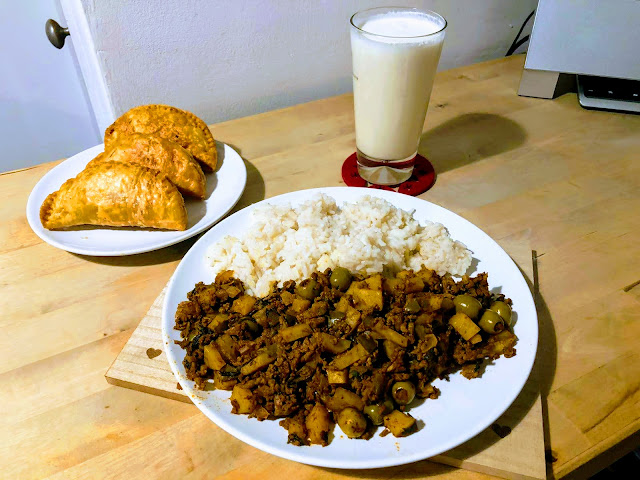 Allow me to flashback to September 2012, after visiting Puerto Rico's El Yunque National Rainforest I had the immense opportunity to visit Luquillo Beach. At Puerto Rico's 'Playa del Luquillo' I found the most delicious beef empanadas, I also drank up a few 'Piña Coladas' that had been freshly made! Those beachside treats had me feeling some kind of way during the second lockdown that England faced during that Saturday! I had already looked ahead to see what foods I wanted to cook for my pre-birthday weekend, I had some serious making up to do because the culture had yet again been ripped from my life! Getting a 'Picadillo' on the go, I was cooking up another Puerto Rican feast! With the right ingredients for the 'Piña Coladas', I planned on drinking a good seven for good measure! I used pre-made puff pastry for the 'Empanadas' fearing not I was stepping into Cuban territory because I had seen some more puffed versions online, I wasn't mad! Cooking has become something of a therapy for 2020! Ay!

Having never fried anything pastry like before that Saturday night, I was very dubious how things would turn out? I didn't know? But as if luck would have it, I was fine because I had a little assistance with the fryer. One the pastries were all cooked through, I tried one of them for myself to see what they would be like! The beef empanadas were lovely, they tasted just right! The 'Picadillo Con Papas' had cooked through, modelling the original Rican recipe with potatoes I had found something more Cuban. Cooked to perfection, I loved the 'Picadillo', 'Empanadas' and the numerous 'Piña Coladas!' Yes, those drinks had been made from scratch with white rum, pineapple juice and slices with fresh coconut that was all condensed together. The weather might have been horrible but the culture was on fire, with the US Elections a success for Biden and Harris it was a double celebration for my pre-birthday and the ousting of a certain 45! My Caribbean feast had me transported to another place during the depths of an awful year! Comer! 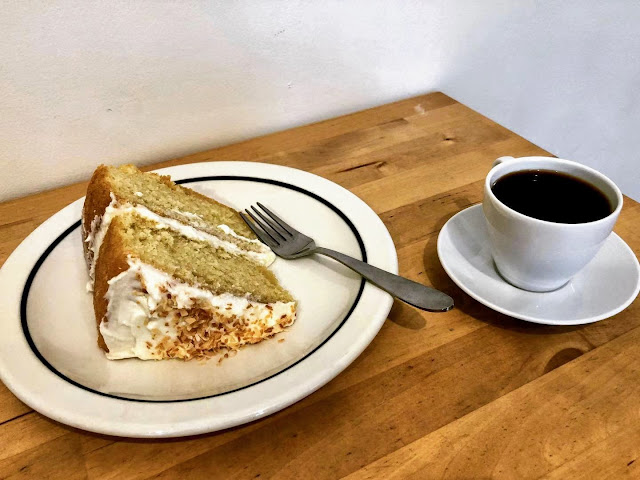 2019s birthday celebration had me sipping on Soju within Itaewon, Seoul! Finding myself back in England due to life's events, I was about to spend my 30th birthday during Lockdown 2.0! Looking back I am not mad because this 2020 may have taken my job but it has given me precious memories and time with my family. Every birthday needs cake, not being abroad I wanted to make the most of a few home comforts. Calling upon my Nan, we worked together to bake a Puerto Rican inspired 'Coconut and Rum' cake. Using the leftover rum that had been used for my 'Piña Coladas', we found a way to incorporate that liquor into the two Victoria sponge cakes. We used coconut milk and coconut flakes for the icing and butter cream. Toasting some of the coconut flakes allowed me to replicate that crisp coconut taste that injected a much needed tropical vibe, the November dark nights had drew in by that time! Absolutely no way, Srta. Rona was not invited to 'mis celebraciones de cumpleaños! Now, what goes best with cake?
With the cake baked the day before my actual birthday, I enjoyed the first slice with an espresso style coffee. The remainder of the cake was set in the conservatory at my Grandparents house. The cake tasted so good! The fragrance of the coconut could be tasted, with the sponge being really soft it was an absolute winner! Being back home in England for my birthday definitely ensured that I would have a homemade cake. Trading that South Korean weekender that I took from Beijing in 2019, the events triggered by Srta. Rona had forcibly created a new experience that I was not expecting to be. 2020 has changed the game, keeping my sanity intact through the medium of food and culture, I feel at peace that 2020 didn't see me get scandalous in Shanghai! The Hispanic theme served me well, taking notice like I did before I have been able to cook meals that I can replicate once life goes back to normal for me. Finessing those beans, I'll be cooking like a Rican chef! ¡La comida es cultura, la cultura está en todas partes! Part 6? ¡Venga!
¡Torta De Cumpleaños!
Joseph Harrison