Missing China more than words could ever explain, Miss Rona continues to hijack my plans for the moment! I chose to cook some Chinese food. While Miss Rona enjoys the fame, I knew that I would be challenging myself to cook some Sweet and Sour Chicken from scratch! Xinjiang Pilav had me thinking about my summer holiday to China's Xinjiang Uyghur Autonomous Region. 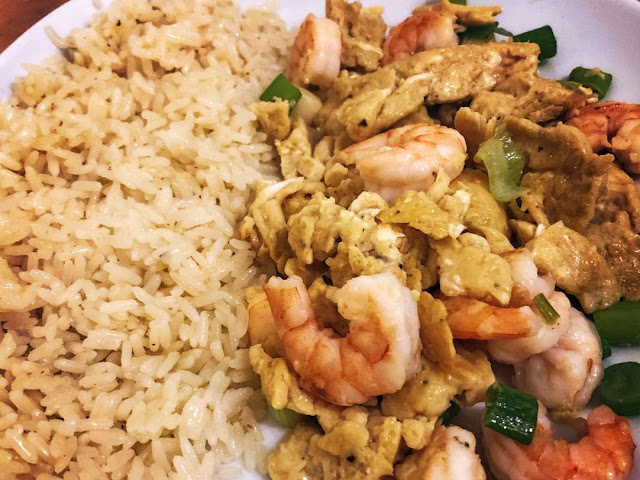 With an everlasting bag of king prawns to eat, I decided to make a fancy prawn omelette. I had already cooked up enough rice to feed an army the previous day. Absolutely, I needed the perfect Chinese dish to kick off my Chinese leg as a part of 'Recipes With Miss Rona'. Feeling all confident, I mixed my beaten eggs with soy sauce, a chicken stock cube and some olive oil with salt and pepper, but why? I had my prawns pre-cooked, that was the part that didn't take much thought. I don't have a good track record with omelettes, rubbishing that I made sure I followed the recipe by lightly scrambling the egg, breaking it apart every so slightly. I was able to blend things together nicely with the prawns to then present on the plate with the rice that was fine. It was all looking really nice, sitting down to try the omelette like dish I found the eggs tasted slightly salty but I had cooked it with method so I finished it, regardless. Where did I go wrong? Had I gone wrong at all? Was I being unduly strict on myself? I did not know but I wasn't mad!
Leaving any negative self criticisms for another day, I knew deep down that following that mix for the eggs had given it the extra taste. Taking the taste experience as a learning curve, knowing the next time not to mess with the egg other than a little bit of seasoning. How I miss my bamboo chopsticks because I would have had that meal in a bowl, eating with the quickness like I would do in China. That brief Chinese culinary reprise was nice, I don't know when I will get the things that I need to return to the Middle Kingdom, those foods I miss! Cooking up something that I could vaguely associate with Asia or China had me happy. I think it was that Taiwanese egg goodness that I had along the Taiwan Snack Street in Xiamen? I will revisit a recipe with a Taiwanese omelette recipe once I get back to China, I will make those corrections. It's always good to learn, these 'Recipes With Miss Rona' are helping me challenge my cooking capabilities, to learn from these lockdown meals will be for something. Let me get to Taiwan! 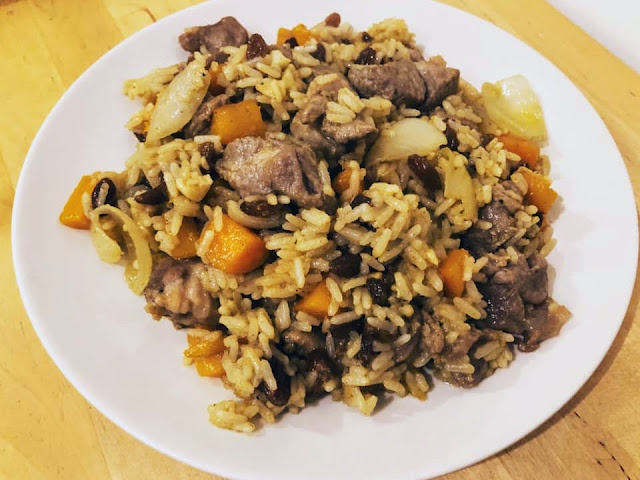 Laden with craft purchases from the Urumqi Bazaar, I was feeling hungry during my first day in China's Xinjiang Region. Turning off Jiefang South Road, I found a small local looking 'soup kitchen' style restaurant. In the moment I hadn't got a clue about Uyghur style food, I saw that the people on the table behind me had a lamb and rice dish, it looked delicious! Captured above is my own version of China's Xinjiang Pilaf. Cooked down with cumin, onions, carrots and sultanas, I tried my best to recreate that Turkic style rice dish during a rather dreary October evening. The aroma of the cumin reminded me of Xinjiang without fail. It's no secret that Xinjiang has been on the western news reel for a couple of months but from the western front, people do not have any idea what culture and food makes China's Xinjiang Region famous! I for one paid no attention to the noise during my 2019 July visit, at the time I was living in China so I knew better not to ask any questionable questions about the rumours the BBC loves to spout.
Chowing down, during that initial Urumqi moment I found the sweetness of the sultanas come through the most. It was just like Turkish Pilaf that I had tried during the countless summers that I had the chance to spend there on holiday. Missing China, I tried my best to recreate that Xinjiang Chinese dish, the last few months have not been easy to spend in dreary England. The spiced lamb pieces were cooked just enough, was I sitting in Bilston at my Grandparents house or in that distant Urumqi restaurant that was just off Jiefang South Road? I am finding out fast that finding culture to recreate will help me get through this patch, injecting some Uyghur culture into my cold October evening had me listening to the music I had listened to in China after I had been to Xinjiang during July 2019. Throughout the main lockdown I had got to know some Uzbek culture online and with further digging, those findings will allow me to find other places that share the same kind of culture, food and music that Xinjiang, China does. Joe, 加油! 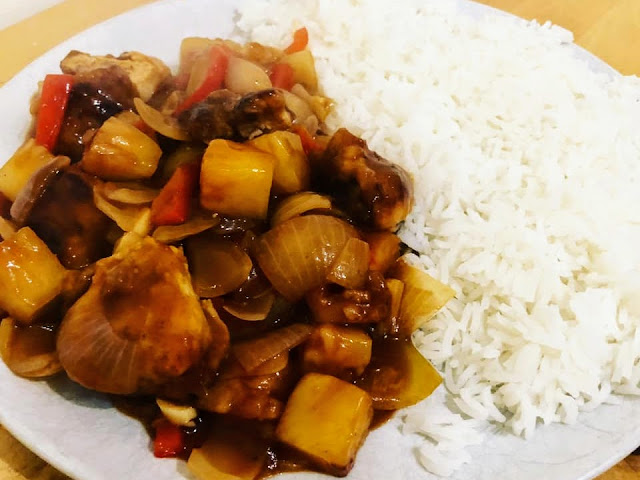 It's safe to say that after living in China, I stay away from my local Chinese takeaway's because they've really disappointed me with their British Chinese food offerings. Their style may be more 'sweeter' as to suggest the owners hail from Hong Kong or the Guangdong Province area? Regardless, I wanted some Sweet and Sour Chicken but I didn't want to waste my money on food that wouldn't have impressed me much! Knowing what to do, I asked my friend from Hong Kong a massive favour. Kelly, my friend from university had hosted me during my 2016 Chinese New Year in her native HK! Her Mom, Annie had cooked the best ever tasting Hong Kong Sweet and Sour Chicken on my first night in China's former Overseas British Territory. Asking Kelly if her Mom could write down her recipe, I was looking to recreate those sweet and sour flavours from that Hong Kong memory. Miss Rona, you sent me back to England without any consideration but you will never stop me from creating my own form of culture! This cooking game isn't over!
With thanks, Kelly kindly sent me her Moms recipe for Sweet and Sour Chicken. Collecting my ingredients together, I was fortunate enough for my Grandparents to help me source the chicken and pineapple chunks. Following the recipe as best as I could, I made the marinate the way Kelly's Mom had directed so in the recipe. Using cornflour I pan fired the chicken, looking golden and delicious I set that aside. The sauce came together rather quickly, with the familiar smells I felt as if I was back in Hong Kong. Maybe I had not added enough tomato ketchup, that did not matter because to taste the meal had me transported back to Asia! I had to admit that I had made Cantonese food that had tasted better than the local takeaway! I shared my successes with Kelly, it was the boost that I need to reconnect with her. Time difference and different schedules are not fun, the medium of food created a buzz! Miss Rona, vaccine got you yet? 离开! That means 'get out!' I'm keeping a reflective state of mind, just about! Miss Rona, 离开! 快快! 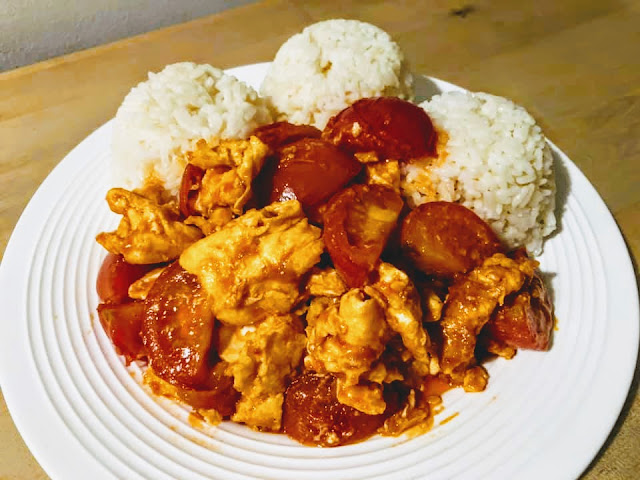 So, my final Chinese meal for the week needed to be something simple! Some of the other dishes involved a methodology to their madness, the final meal had to be easy just like I said before! 番茄炒蛋 will always be a favourite Chinese meal of mine, it was something of a strange combination when I first found it in Wuhan, China during my first phase of China life. Delicious Chinese food can be made really simply! I only approve of Chinese food from the Middle Kingdom! Fried tomato and scrambled eggs with boiled rice, do you follow me? 明白了吗? Getting my eggs together, I mixed three eggs together to then lightly scramble. Following a very simple recipe from YouTube, I tried my best to not break the eggs at that point. Placing the half scrambled eggs to one side in a bowl, I added four small chopped tomatoes to the hot wok to cook at rapid pace. Once the tomatoes had softened I added the eggs back in the pan to scramble further. A generous splash of tomato ketchup allowed me bind the eggs and tomatoes together!
My rice had boiled and cooked to a level that I deemed to be satisfactory, I didn't need to construct my meal like before, things fell into place with minimal effort. With each taste I was being transported back to those first plates of 番茄炒蛋 in Wuhan, China! I posted the above photo of my scrambled eggs with tomatoes and rice on WeChat, a number of my WeChat friends expressed their positivity towards my dish! As Chinese, they really loved the photo and said to me in the comments that my attempt looked like their favourite dish! Impressed with those WeChat comments, the connection with the Mainland had me feeling one step closer. Throughout this time, we haven't been able to control the speed of this COVID19 rollercoaster to hell. Having the time and funds to get back in-touch with a type of food that once was my everyday, that has been the powerful thing. To create my own kind of international culture has been the power that I needed to feel! The storm shall pass but the kitchen will always be open!
我喜欢吃中国菜!
Joseph Harrison