There's Something About... Seoul, South Korea!

After travelling extensively within China's Mainland and Greater Bay Area regions it was high time that I had a foreign holiday outside of the Middle Kingdom. I didn't choose Seoul, South Korea, it chose me! The capital city of the Republic of Korea called me over during 2018s October National Day holiday, known as the Golden Week in China. S, those Soju's were lethal! 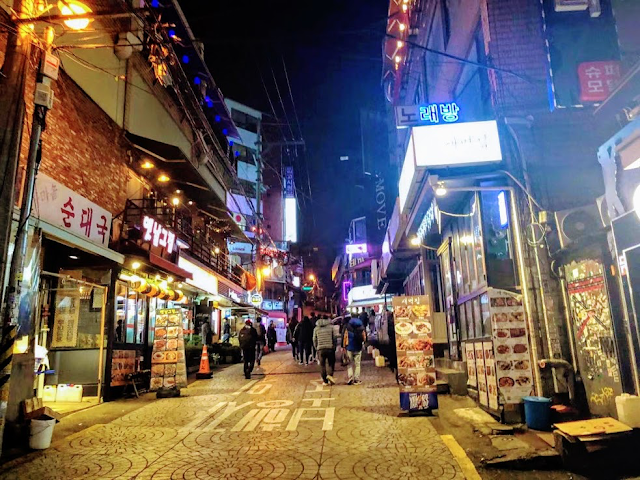 Soon after arriving into Seoul Gimpo International Airport I had no idea that I would be returning the following year! Yes, there was something about Seoul, South Korea but it would take me few more hours to find that something something out! The photo above was captured in November 2019 on my second visit to Seoul, I was embarking on my 29th birthday celebration in the South Korean capital because first time around I experienced such a great time I had to comeback for another taste! Fate had me changing that original Myeongdong hotel, it was changed for a hostel in the heart of Itaewon. I lived for Itaewon's international corner, it had that wayward feeling with a hill that I would be visiting more times than I would be able to mention after those two scandalous Seoul trips. My first night had me getting into the Soju's quickly, the local juice had me feeling right in the holiday mood! Both trips gave me what I wanted when the sun had gone to sleep, I wasn't getting no sleep because I knew what I wanted to do! 물론 서울!
Food within Seoul during those nights had me heading for Zafran for that Tandoori chicken had me coming back for more! Dressed to impress I had to do my detective work only a little, it was evident that Seoul had its own 'rainbow corner'. That 'Homo Hill' had me introduced to Seoul own 'Gay Village' within the darkness of the hill I found plenty of lights and culture both times during my two visits. The first few nights out during the week in 2018 were quieter but I had other things to do once those 'after hours' crept closer to sunrise. Going back down the hill I found 'Hyundae', keeping things elusive I found a certain liking to certain Korean nature. Impressed with the offerings I went into the darkness once more to enjoy such delights. Seoul had given me a few surprises but deep down I knew this East Asian city would have a certain flavour that would be found after a little digging. I returned one year after my initial visit to enjoy Itaewon at night during the weekend. Not disappointed, a third visit will be happening! 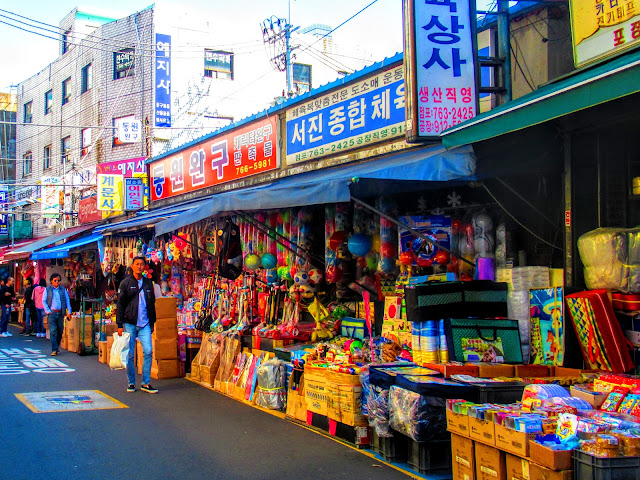 Being outside of China for the first time gave me the thirst to know more about Seoul's super cityscape. I did not have a plan, I winged it like I always do! I will definitely have a Korean sim card purchased from TaoBao before the next South Korea trip! Staggering back to my hotel on the first real morning was sight that I don't wish to repeat again, no! Downing five cups of complimentary coffee had me questioning those 'Hyundae' life choices! Onto the Seoul's Subway, I refuelled with some Korean Fried Chicken and another beer. As luck had it, I found Seoul's Dongdaemun Market with ease. I had my young learners to think about, I wanted to snap up some Korean inspired language materials. I succeed and saved, those purchases helped me get from one place to another. I certainly made those educational purchases with a serious intent, those parents were paying high tuition fees, I needed to deliver. I had no idea I was close to the Gwangjang Market, everything happens for a reason! Next time will be effortless! Yes, S!
Heading towards Gyeongbukgung Palace allowed me to find the nearby Josean Era streets, within Seoul's Hanok Village. I took notice of the architecture with its Josean Era style, seeing some ladies wear the national Korean dress gave me those cultural views. I know that I'll return to take a closer look at those historic streets, they are protected and maintained so I have faith that I will appreciate them once again. Heading to the million lights of Myeongdong's shopping mecca, sure I loved the vibrance! Why would I want to revisit places that I saw during my first visit to Seoul? I went ahead and cleared my camera before travelling to Pyongyang, North Korea five months after October 2018 when I initially visited South Korea. I was nervous, I didn't want any photos to be found from the other side of the Peninsula. Maybe an external storage thingy would have helped? Regardless, those places are still in my heart and with what's happened with Coronavirus there's no excuse not to return to responsibly recapture those photos. Life lessons! 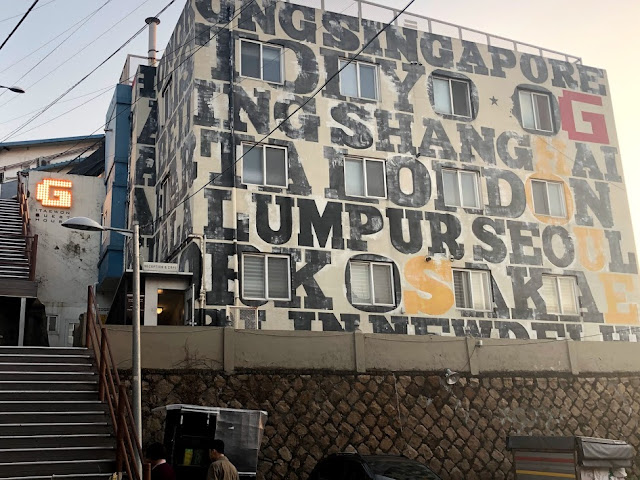 During the planning stages for my first trip to Seoul, South Korea, I had originally planned to stay in a standard modern looking business hotel in Myeongdong. Something in my heart told me that I needed to choose someplace to stay Itaewon, that foreigner friendly neighbourhood had a plan for me! Looking on Hostelworld.com allowed me to find G Hostel Seoul, located in the heart of the action within a quiet nook, I had to book up! The first experience at G Hostel was fine, the breakfast was hearty and complimentary with enough coffee for me to revive myself from my awful Soju hangovers! With my second visit being a glorified overnight trip from a Saturday to Sunday, I needed to stay within a familiar place that I would able to find with ease. I took all of two seconds to choose G Hostel Seoul for that November 2019 birthday weekend visit. Able to lock my bag away in the room after getting ready, I was able to get on with the night without any issues. It was easy breezy! For that third visit in the future it will be G Hostel! 빨리!
Getting to the NamSan Seoul Tower took some going, I wasn't in a rush on the second day once I had regained some consciousness. Through my hungover ramblings the previous day I had found one of the many entry points to Seoul's Gyeonbukgung Palace, that saved time. I only had 72 hours in Seoul, for what I saw I feel blessed. Paying my Korean Won I accessed the impressive palace, I was impressed with those imperial features with the mountains in the distance. The gardens looked gorgeous, after my palatial visit I found some time to see the Josean Era streets once again. Finding the Han River gave me a sense of freedom, the river flowed effortlessly during that sunshine autumn day. Making my way towards a kitsch neighbourhood near Itaewon I found the view from up above, with the N Seoul Tower in view I had everything that I had wanted from that Seoul day! Finding a 7Eleven I enjoyed my second bottle of Soju of the day, it would be time for that Wednesday to be turned up a few notches! Seoul kept on serving! 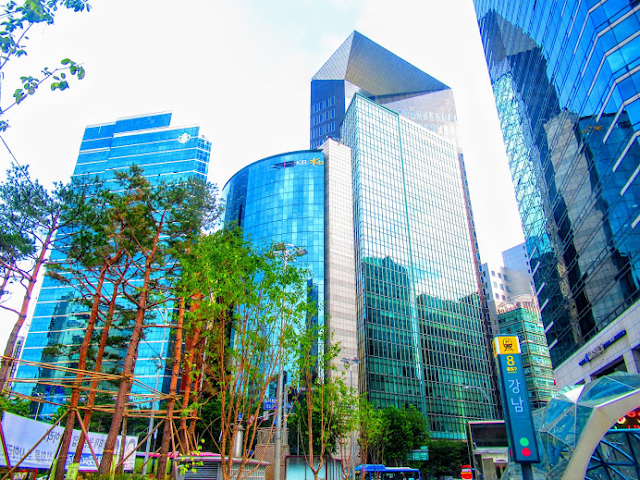 The final day of my three in Seoul saw me crossing the Han River after a somewhat morning of delirium. I had played some tricks, looking at the bigger picture, I was going to be fine! Getting over to Gangnam had to be done, I tried looking for 'Gangnam Square' but realised quick that I wasn't seeking an experience that was somebody else's dream, no! Getting my Gangnam fix from those towering glass skyscrapers, I saw several 'SamSung' attractions for free! Content with my own serving of 'Gangnam Style' I headed for the HQ of JYP Entertainment. I love KPOP, it was one of the reasons why I had chosen to visit Seoul in first place. Finding that entertainment building I was able to have a sumptuous hot chocolate in the cafe at JYP Entertainment's HQ. The cafe itself had a stage with a huge media screen, I imagined that many an act had performed to a packed crowd of press. Seoul had served me something different because I had taken the care to research. That third visit, Gangnam 'Horse Style Dance' Square will be found with ease!
Located over the road from the JYP building, I found Seoul's Olympic Park with its lush greenery and calm river. I needed that slice of calm because my short trip to Seoul had been anything but calm. I reminisced about my 72 hours of crazy, no mistakes had been made if not a few poor choices were made but they didn't come to haunt me after the trip. The culture had me fed, I didn't gravitate towards Korean food during that trip and neither during my 2019 overnight trip. I know that even after my two previous visits to Seoul, South Korea that I will make a third trip happen in the near future. I plan to revisit the Josean Era Hanok Village to take my time because I was not wise. Embracing Korean food like I did when I went to the DPRK, I will visit Gwangjang Market because there's no actual excuse! Needless to say the night will have me under its spell but I must return once things normalise. Yes, I definitely need to visit Busan and Jeju Island so I see an extended break happening! There's something about Seoul, South Korea!
금방 돌아 올게요!
Joseph Harrison