Recipes with whom? No! So, I chose my battles carefully, Miss Rona had to play it nice, otherwise! At first I took some time to create some 'Rona Rhymes' to use humour within this dark 2020 time. Merging from one form of writing to another, I found myself making up 'Rona Recipes'. Creating an exotic escape at home, channelling Cuba and Puerto Rico! Rona, let's cook! 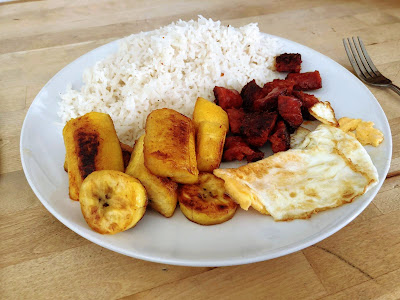 Before I came back from China I had been eating takeaways pretty much everyday for my evening meal, to add insult to injury I didn't have access to a kitchen until my unplanned arrival back into England in February 2020. Cooking had become something that I hated doing during those final months when I lived in my then Beijing apartment. Finding myself in a second lockdown at home, I half enjoyed the British foods for a period of time. Yes, I cooked one or two rice meals but if be told my heart wasn't in it. Fast forward to the end of September 2020, I found myself in my seventh month at home. I was craving some internationals foods. I had wanted to cook up some 'plátanos' after I had unknowingly cooked up some banana, chorizo with some white rice for lunch one day in September. Craving some serious culture I got my cook on, starting with a Puerto Rican breakfast feast I cooked up my plátano, chorizo y huevo con arroz blanco! Making all the right choices I enjoyed my breakfast very much! Que rico, baby!

Oh, 'plátano' is Spanish for plantain! Getting into those 'plátano' vibes I knew that versatile cooking banana would allow me to cook more adventurous dining options! Consulting some 'recetas alternativas de plátano' through the medium of YouTube! I wanted more 'comida sabrosa' in my life because Miss Rona had done her best to ruin my pre-Covid life enough! Checking out 'Chef Zee Cooks' I studied those food recipe tutorials because I needed that culture injected back into my life! Holding pause for one moment, bear with me! I will always be appreciative for all the cooking my family has done for me since I had to come back from China unexpectedly, I was seeking something different though because English food is like a holiday food that I don't eat very often when I'm overseas. Do not get this twisted, I love English food but everything in moderation since I've become used to rice, noodles and other world foods. Staying at my aunties gave me the chance to have foods with more spices such as 'jambalaya!' 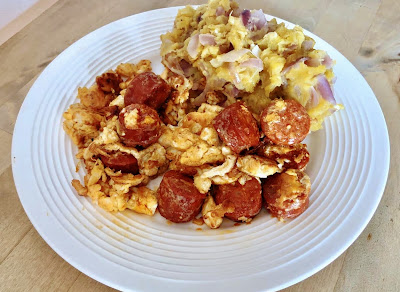 Back to 'Chef Zee Cooks', I found her channel after I searched for some Dominican recipes. I had my eyes opened to what 'Mangú Dominicano' actually was, for those who are unclear I am talking about a dish that's made from mashed plantains. I tried to cook 'mangú' for the first time and it looked awful, I had no idea how to season it because I rushed the process. Consulting my Dominican friend, Mariam shared her cooking tips with me regarding the art to make a more authentic 'mangú'. Taking my time second time around, I used red onion with five spice. I allowed the plantains to cook through properly because I used two instead of just one. Adding more butter and seasoning properly I mashed all of the ingredients together well, resulting in an extremely delicious serving of 'mangú Dominicano' that I served some scrambled eggs with chorizo on the side. Was I going a bit chorizo mad? Absolutely not, I enjoyed using the spiced Spanish sausage, it gave me something different. ¡La comida caribeña me hace sentir feliz! Yes!

It wasn't just food that had me on that Spanish Caribbean hype, no! Miss Rona had ground me good and proper but with that lockdown time I had the chance to discover a lot of 'Cubaton' music that inspired me to make some Cuban coffee, just because I could! From 'Gente De Zona' to 'Divan', the music of Cuba has given me that spice, something extra that I have been able to tune into when the noise of this year has gotten me in my feelings. The music was also on a Puerto Rican vibe, having a connection back to the 'enchanted island' allowed me to float away from the groundhog day nothingness of 2020. Needless to say those meals have been cooked with those Cuban tunes blaring out. With similar foods cooked with plantain between the islands, the infusion between Cuba, the Dominican Republic and Puerto Rico have had me on island time with my stomach full and senses on the right vibe! No, I might not be Cuban but 'Siedy la Niña's' 'Cubana' had me understanding her Spanish! Yo soy Cubano? ¡Puedo soñar, R! 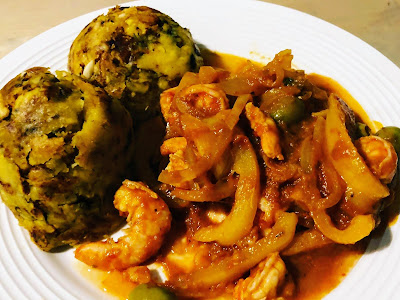 Over-planning for my Sunday meal as arrived October had me finessing my approach to cooking. My plantain stew didn't work out, I wasn't mad because the plantain was deep fried down into some chips that were delicious and the rice lasted for the week ahead! Getting back to YouTube, I wanted to take things down a Puerto Rican avenue once again. Finding 'Sweets & Beyond' I was introduced to Puerto Rico's 'Camarónes Enchilados' and if truth be told I put myself on a mission the following day to find all the ingredients to cook that night! Not playing, I got what I needed up Bilston even though the biggest supermarket in the town didn't have the prawns that I had wanted! Lidl came to my rescue! What in the hell was 'sofrito?' Making sure my list was correct, I returned home fully prepared for the three hours that I would spend cooking, making everything from scratch. The coriander, onions, garlic and peppers were blended to make the 'sofrito!' Taking on a task and a half, I made my own 'mofongos!' I did that!
Adding freshly made 'sofrito' and tomato sauce to the pan I got my cook on! I then sliced the 'plátanos' and had them waiting in some seasoned cold water before I was ready to fry them for the 'mofongos'. Adding my soaked and peeled 'camarónes' to the bubbling mixture had me hungry! The main meal came together really quickly and with each relaxed yet precise direction followed from the 'Sweets & Beyond' recipe tutorial, I was well on my way. Winging it with the 'mofongo' I had already crushed up some 'pork crunch' which I will lovingly refer to it as 'chicharrón Inglés', that was all good to go. I had watched 'mofongo' tutorials by a few chef/YouTubers ahead of my first try, choosing to follow the basics of the 'Freakin Rican' gave me half an idea as what to do! I mashed my slightly browned 'plátano' slices in my makeshift renamed 'pilon'. Overall, the 'mofongos' tasted good for my first attempt, next time I will have the 'mofongo' as the main part of the meal. The whole meal took me back to the Rich Port! Yes! 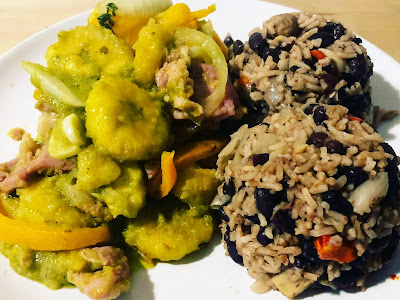 With more 'sofrito' left in the fridge than luck I've had this year, I knew that I could get experimental and not have to prepare half as much food compared to the previous evening. Using up some of the gammon in the fridge, I marinated it within some oregano. With onions, one orange pepper and another few garlic cloves I added the remaining 'plátano' into the pan after it had been sliced. The 'sofrito' entered the party soon after, giving a lovely green look to the cooking concoction that was being cooked up. With the ingredients mentioned all in the fire, I added the sliced gammon and cooked it up until I saw it had turned a lovely piggy pink colour! The 'plátano' slices had reduced down to a soft and mushy consistency that still kept its problems together, unlike I've been doing under the pressure of this year, Miss Rona be ashamed! My messed up black bean rice came to play, acting as the perfect side! I scooped two cup fulls and made my dish look all fancy and that! Yes, I'll be cooking it again! ¡Lo amo mucho!
How did all this cooking leave me feeling? I felt in control of my life in one small way, that gave me something back, for me having the money to buy a few ingredients and then cook them was the power that I had taken for granted whilst in Beijing. Having to watch those finances since returning has had me restricted, for that reason I made sure I cooked my food with care and conviction. I chose to order out everyday in Beijing before Rona took hold and had me ordering because I had to not because I chose to do so. October had me feeling very reflective, now I'm able to have the time to put together recipes that are not just Chinese. Planning for when I go back to China for those nights when I don't want a local takeaway, I can enjoy the privilege of having my own kitchen to cook one of my many 'Rona Recipes' like none of this happened but it really did for the reason that it did. I'm so over this year and the chaos Miss Rona has brought me, I'm thankful for these 2020 life lessons. Srta Corona, ¡no ha ganado! ¡Perra! ¡Vete! Get out!
¡Plátano Para Cada Comida!
Joseph Harrison