Refreshed from my dead sleep, I departed from my Jury's Inn hotel in Sheffield city centre. I had one more morning/afternoon before my Birmingham bound train would depart, I had no time to lose! Keeping the current social limitations in mind I had booked my afternoon tea ahead of time, mapping out my afternoon around that reservation was crucial. Sheff, let's get restarted! 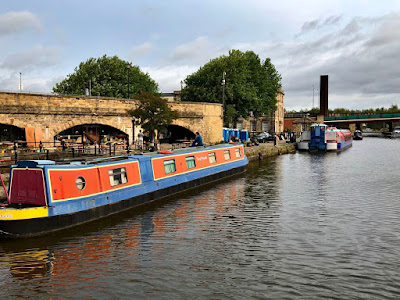 Waking up uncharacteristically early, I enjoyed some breakfast television with a coffee in my hotel room. Thankfully Piers Morgan wasn't hosting 'Good Morning Britain' because I would have switched off until Lorraine graced us with her Scotch charm. Checked out and on the way, I headed for Sheffield's Victoria Quays to see some canal-side goings on. The walk from my hotel wasn't bad at all, the compactness of Sheffield's city centre had me going from point to point in less than ten minutes. Standing quieter than usual, the moorings were surprisingly full, the calm waters of the Sheffield canal quay gave me a mixed sense of 'Morning Calm'. I was very surprised that the arched holdings stood empty, as two passing bikers conveniently said 'if this was any other city, this area would be full of bars and restaurants!' Going around the corner I did see a cafe that was operating a 'takeaway' service. Maybe Sheffield's Victoria Quays will see its canal-side hospitality revolution? The view looked good to me during that Yorkshire morning!
I adored the pint-sized quayside in Sheffield, it was tucked away from the noise of the city and things weren't looking commercial at all. My morning was going by smoothly, taking time to take the Victorian era architecture gave me something to appreciate, the lockdown had me grounded with no exceptional views to admire! Sheffield's Victoria Quays allowed me to connect with another part of England's vast and gorgeously restored canal side wonders, this year wasn't meant to be one spent in England so with a quayside named after my favourite former Empress of India had me feeling royal! The essence of Queen Victoria continues to reign on! Content with the mornings offerings, I took the last of views of that Victorian era canal-side spot. Thinking about my next move, there was no way I would taking any form of public transport from Victoria Quays to Jameson's in Sheffield's Antiques Quarter, no way whatsoever! Beating my previous step count wasn't the priority, I would walk on regardless! I wanted to save my coins! Yes! 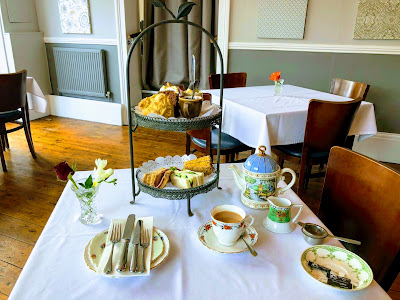 Walking past Sheffield Station, it wasn't time to say goodbye to Sheffield! No! Leaving the immediate city centre I found myself in Sheffield's Antiques Quarter. My iPhone GPS had me walking around the houses but surer than anything else I eventually found myself on Abbeydale Road. Let's rewind back to a Britain that was on the verge of lockdown, I had recently returned from Nottingham with a fire to see one more city within England, I was ready! Looking to Sheffield, I knew that my potential visit would have been incomplete without having a sumptuously sweet 'Yorkshire Afternoon Tea!' Choosing another tea room along Abbeydale Road, I thought I was good to go! Fronting a life out of lockdown I made those reservations at Jameson's with a renewed confidence, I was ready once again! Reporting for my reservation, I followed the social distancing 'table service' to the best of my ability. When the range of cakes were being explained to me, I forgot for a second, standing up to be politely asked to sit down! The normality of the environment at Jameson's had me feeling like Rona had left us! Go on!
Opting for the 'Traditional Afternoon Tea' that consisted of a pot of Jameson's exclusive blend of tea, coffee was also available to me. I made use of the three savoury finger sandwiches, choosing 'finely sliced cucumber', 'red cheddar cheese' and 'hand carved ham'. As if that wasn't enough I chose to have a freshly baked plain scone that was served with both fresh clotted cream and strawberry jam. To compliment my 'Traditional Afternoon Tea' I opted for a generously sized piece of carrot and almond chocolate cake, sure as anything I was sent deep into a 'cake euphoric state!' Well and truly in a 'cake hole!' I would surely need rolling back to Sheffield Station as my departure time neared. The friendly staff had clocked that I was a writer of some sorts, I joked with them that not being able to move around the tea room added an extra challenge whilst I took my centrepiece photo. A new experience during this so-called 'new normal' had me working those iPhone photography skills from my seat, playing by the rules was and is crucial! OK! 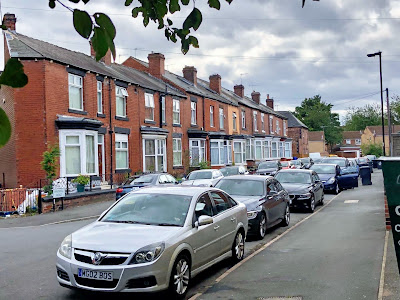 Sheffield being famous for its red brick houses had me looking for some 'Street Realness!' Turning off London Road onto Wolseley Road gave me those simple rows of housing that I was searching for! Catching a glimpse of Harwell Road sealed the deal, knowing that I had to take that snap needed patience, I wasn't going to be the one caught out photographing a normal street with an unsuspecting homeowner papped without consent. Moving away from my intended location, Abbeydale Road switched things up for sure with its artisan cafes and canteens! The edge felt on Abbeydale Road had been feeling the 'cool' had made it to Sheffield's aptly named 'Antiques Quarter'. With time to spare before my 'Yorkshire Afternoon Tea' at Jameson's I was on the look out for Tavistock Road, I had done some serious 'Google Maps' snooping before my post-lockdown overnight trip to Sheffield. I had found the street that I had been searching for, but would it live up to my expectations to be part of this blog? Sorry, Tav!
It was a funny one because I was happy that I had found Tavistock Road after such meticulous research but the well maintained frontages of the young 'yuppie' types didn't serve the grit that I had craved! Afternoon teed up, I headed back to London Road via another glimpse of Harwell Road! Not having much time and with the call to mosque made, I snapped my photos of Harwell Road's houses with intent because I was not going to encounter drama! I loved the unassuming normality of Harwell Road, it showcased the red brick-ness that I had wanted to capture during my visit to Sheffield. As my final segment before reaching Sheffield Station I felt mighty fine, accomplished and sorted it was time to make tracks back to my West Midlands base. Contrary to media reports, the Sheffield Islamic Centre was operating a rigorous virus prevention scheme, it was good to see that the media had got their stuff wrong yet again! Snapped up and in a massive 'cake hole' I made my way to my train, I could leave contented. I had my sen a good time!
Regargless, I Whill!
Joseph Harrison