Miss Rona is still causing havoc in the U.S & beyond! Sure, other parts of the world have been declared COVID free zones. Coronavirus continues to change my world. I'm slowly making steps to aide my comeback to China, things are looking more likely October. Pride went back to a protest at the same time U.S police brutality changed everything! Karen? No, I don't know her!

As UK lockdown progressed I personally didn't see an end in sight, I was angry with the world and the fact my life had been turned upside down. Keeping the faith I looked to the Eurovision Song Contest for my annual musical outlet, or could I during 2020 have that cancelled before my very eyes? Cancelled and rescheduled for 2021, the intended contest that was supposed to have been held in Rotterdam, The Netherlands had been reimagined for us all to hold onto something Eurovision. Scaled back to one studio in Hilversum, The Netherlands because the original venue had been transformed into a Coronavirus field hospital to support the overwhelmed existing health services. It was a bittersweet celebration that had a sobering mood, 'Europe, Shine A Light' was our solitary candle burning in the nights sky. For one night only each of the 41 participants were able to introduce themselves because the competition had ceased. Taking my Eurovision away was just uncalled for! Miss Rona, Rotterdam 2021 will happen! ESC, sing it!
'It's OK not to be OK' was the motto for the 'Europe, Shine A Light' Eurovision instalment that was more like a remembrance service. Select performances were conducted 'from home' comprising of past winners and more recent Eurovision trailblazers. Netta performed an almost whispered rendition of her new song 'Cuckoo', the UK lockdown had me going 'crazy' so it was very fitting. Panning in one the European capitals showcased the epic scenes of silence, the world remained on lockdown as a piece of Eurovision history took place. The gutting fact was that 'Sweden', 'Serbia' and 'Iceland' had produced stellar songs that would have made such memorable performances for all the right reasons. Miss Rona, you cancelled the Eurovision Song Contest! 2021 will bring us hope and a brand new contest, let the music play! For that very reason a vaccine needs to be found to end her mission of mass murder! Miss Rona, I am talking about you because your time is up! Eurovision will continue to give us one heck of a party! 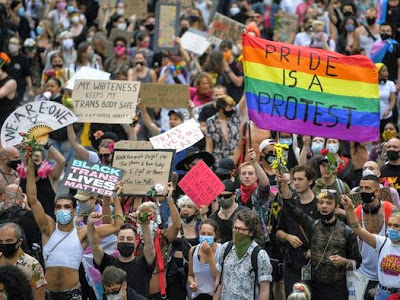 As a member of the LGBT community I have attended three Pride events over the years, I even did my university dissertation about the impact of Pride tourism, I wasn't prepared for 2020s happenings. The drag performers stayed behind their Zoom video performances, Pride around the world rescheduled their parades and entertainment for 2021 without any fuss. Pausing for a second, several acts of police brutality were committed in the United States of America, the world had had enough with the death of George Floyd, Breonna Tyler and countless more lives that had been taken at the hand of a certain police force. Communities stood together with the 'Black Lives Matter' movements, but 'All Black Lives Matter' so queue the protest that's been turned into a party! As Marsha P. Johnson did before us, the enraged members of the LGBT community bound together and marched as if their lives depended on it! The upcoming election needs to bring America back into the Blue, this is not a jokE! No second chances, USA! NO!
'Pride is a protest' because sequins and elaborate floats fool us into how far we've actually not come! As the LGBT community marched in-solidarity with the fallen 'Black Lives' that 'Mattered', an eruption of spirit and upset filled the streets of countless U.S cities with other countries taking to the streets to express their disgust with the constant cycle of 'systemic racism' and blatant acts of murder that had been committed. The lockdowns had caused us to stay at home, but remembering social distancing it was a cause that needed to be brought to the forefront. The mishandling of many things throughout the first quarter of 2020 had proved to be irreversible. Miss Rona had unleashed terror and fear but racism and utter evil had been brought to another forefront. Australia joined the noise, their indigenous Aboriginal population continue to be mistreated as the 'First Nations' people of Australia, their participation alongside their allies stood more than necessary. 2020 will continue to school us, a change is needed! 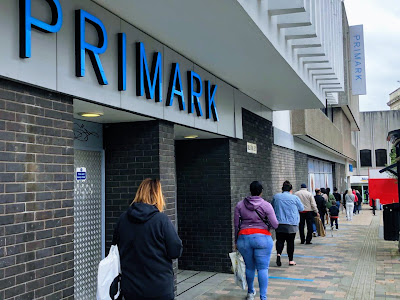 As July neared it was deemed by the UK government that non-essential retail could reopen. Why? What for? The infection had dropped in the UK but not to the level that most people would agree that the world would still turn even if Primark remained closed for another month or two. I was not pleased! Low and behold on the 15th June 2020, select Primark stores reopened for business. Most of non-essential retail reopened in England on that day, it was to be that the 'new normal' would involve shoppers having to wear masks and to sanitise, the staff would be wearing PPE and stores would have one way systems. It was evident that the UK government wanted the economy to bounce back, on the surface the shoppers went about their business absentmindedly as Miss Rona waited to bounce back at the same time with her deadly grip that grew stronger! Would the English public listen to these new rules? Socially, what? Staff weren't wearing masks and I didn't see any enforcement regarding the rules! Jesus, England!
With lockdown easing it in the UK, I was able to get my criminal background check completed finally. The whole process had been first started in mid-February 2020 after I had got back from China, due to the virus outbreak I hadn't originally planned to do that authentication because I had planned to transition to my new job without leaving China. I found walking, I used that fire to actually get outside for once to work off my 'lockdown lard' off, in my third week I managed to walk 83,000 steps! I am so thankful for being lifted out of lockdown but the shortcomings of my government won't be forgiven because the UK lags behind our European cousins. Pubs to reopen? Yes, on the 4th of July it was decided that pubs and hairdressers would reopen in England. I got my hair cut and with no desire to go to the pub I watched those folks kick proceedings off! Don't go to the beach! Bournemouth was a blaze with stupid, those beachgoers had lost their minds! A China style lockdown was needed! A second wave or nah? Let us see! 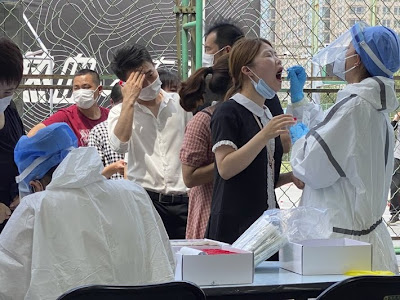 As the UK looked like lockdown had been for something, it was heartbreaking to still see South Korea battling more cases of COVID-19 due to their strict mask wearing policy and forward approach towards track and tracing. I was shocked when a 'super spreader' had passed the virus around the bar street that I had frequented during November 2019. Seoul knew what to do, they test and traced hard! Over the Yellow Sea it was looking like China had rid the virus all together but with a sting of cases from a Beijing food market had two districts on red alert, I thought to myself if I would ever get back to my China life or not? The emotion I felt and still feel was and remains very real! Testing with ultra military precision by the thousands, Beijing had the second wave under control within a matter of days. Bars closed and life subsided with the epic testing! I believe that China will find a cure, China will win! 加油! China handled its lockdown well!
Even though the Chinese border currently remains closed to foreigners, I have complete faith that I'll be restarting 2020 on the right side of my world soon! My papers have been passed onto the rightful HR member of staff in my new city with my new company, with the flight restriction policy easing in October and the virus decreasing, I know that I'll be making moves in a Far Eastern direction! 2020 continues to be a rollercoaster of emotions, I have my mind together and my exercise plan will see me returning to my normal life all prepared to resume shenanigans soon enough! Rona might have tried her best but we still had a form of Eurovision. Pride returned to its roots, communities continue to lessen their divides to tell the truth! The world pandemic hasn't been kind but the pandemic has taught the world to be kind! One day at a time, let's keep in mind that we are all human and that Corona won't win! 2020 has grounded me, 2019s travelling will return in 2021. I have faith in China but I don't have faith in my own!
2020, I'm So Over This!
Joseph Harrison