No, I couldn't let my parents have all the fun, I followed their footsteps with my own visit to India in 2018! China Southern Airlines check-in at Beijing thought I was homebound? In the nicest possible way I said '我不回家，我要去印度'. Delhi, Agra, Jaipur and the rolling Ganges River were in sights! Oh, I was definitely looking for that 'Taj' bench that Princess Diana sat on! 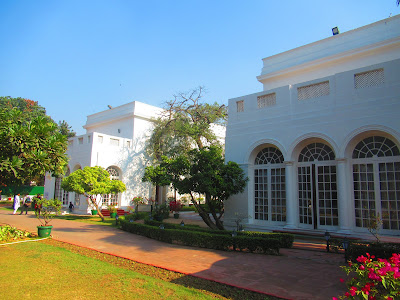 Delhi was an assault on my very senses, I just needed to know! The calm of 'Gandhi's House' had me at ease but Delhi had me on my toes with its realness. I wanted everything from the first moment, it was like a race to find the realness. The taxi got me to the safety of 'Gandhi's House', he had the right frame of thinking  building his house within the 'New' Delhi area. The first night had me getting a shave and getting curry next to the railway station without any care given, the experience would give me something to remember. The story behind 'Humayun's Tomb' had me wandering within those peacock worthy jewel gardens. Getting the realness from the local places around my 'Grand Balaji' hotel had me relaxed, for me the Indian sweets never tasted better! With 200 years of Empire, I lived for the British colonial niches. I definitely enjoyed a few pieces of toast with some cheesy baked beans for breakfast! No English tea, I loved the fusion with a masala chai brew also! Beijing was a playground, Delhi's nature was mad but I lived for it! Yes!

I wasn't going to sit in my room, after getting back from my tour adventure I was looking for the real market streets, I found Pharganj because I wanted a custom suit to fly back in. I wanted to fill my suitcase with Indian incense, they weren't going to be cheap, get out! Getting real, I got real lost within the winding streets I heard a group of American tourists that were being babied. I found my Sister-in-Law the perfect carved Ganesh because the theme for 2018 was elephants, they are right! Those incense sticks were smuggled back into China like a drug, in a hefty quantity I carried those Indian spiced sticks. The Butter Chicken was off the scale, I was in my element! The food was so cheap! Delhi had grit, the India Gates had everyone crowding around but were they on the same page? I didn't think so, I did not pay 'Connaught Place' any mind, giving my coins to those alley way retailers gave me life! I wasn't there to be Mother Theresa, I wanted a responsible adventure! Of course not, I was not on a mercy mission! Del, I'm sorry! 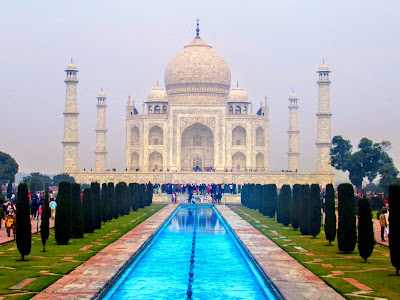 Departing before the birds I left Delhi behind, Agra was on my radar! Meeting with my tour guide, we walked to the grand entrance of the 'Taj Mahal'. Commissioned in 1632 by the Mughal Emperor Shah Jahan for his beloved late wife, Mumtaz Mahal as her own dedicated mausoleum. Without a doubt, Mumtaz Mahal was definitely loved by her husband! I ignored the throng of tourists, the views from afar of the 'Taj Mahal' were unstoppable. I found the bench where Princess Diana had her famous photo taken in front of the palace. I was being schooled, the Mughal ruler followed the Muslim faith, before my visit to India I was under the illusion that Islam hadn't been a popular religion. Set along the Yamuna River, the 'Taj Mahal' looked like an ivory beauty with the less than eye catching surroundings within the same area. I learned that there was a mass period of looting, the Taj Mahal had most of its jewels stolen and had been left in such a sorry state. In true fashion, the British Viceroy stepped up to save the day! Did he?

In 1906 British Viceroy Lord Curzon kickstarted a huge restoration project, the well planned gardens were added once the project had been completed in 1909. Putting a pair of slippers on, I was able to see within the interior of the 'Mahal'. The intricate detail that had gone into the mausoleum told me that the original building process was a labour of 'love' for the late Mughal Emperor Shah Jahan. Leaving the hubbub of the 'Taj Mahal', I was taken to 'Agra Fort', the red brick wonder that had protected the Mughal Empire's leaders during their reign. My visit was brief but very informative, both Indian and British history could be traced back within the tales, Agra had its fort on lockdown! Known as a 'walled city', the fort had seen six ruling parties from the 'Lodhi Dynasty' to the 'British Empire'. Taking it easy near my hotel it was lovely to enjoy some roadside curry, finding the perfect tea biscuits I loved my masala chai at a very ordinary Indian corner shop. With its street realness, Agra served the goods! I enjoyed my day in Agra. 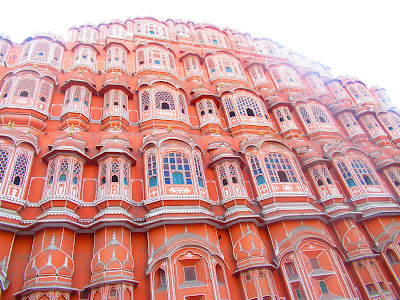 Arriving in 'Jaipur City' had me ready to spend some of my Indian Rupees up! There was an abundance of handmade crafts being sold beside the 'Man Sagar Lake'. The backdrop impressed me much, the half submerged 'Jal Mahal' created the perfectly vista. Happy with my purchases, it wasn't my idea but I was taken to a textile factory showroom, more money was definitely spent! Lunch was mad tasty, the Indian food was out of this world in 'Jaipur City!' Right in the 'pink', the beauty of 'Jaipur's' 'Pink City' nature had me right in love with Rajasthan, the 'City Palace' had me speechless with its 'pink' grandeur. I took my time to explore that 'Jaipur' wonder. The street sellers in 'Jaipur' had me parting with more cash, my purchases were piling up! The vibe around the corner from the 'Hawa Mahal' had me feeling like 'Aladdin' as I weaved in and out of the maddening crowd! I was excited to see my final 'Jaipur' point of interest! Laden with many crafts, I was spending a lot of my money up in Jaipur, I wasn't mad about that! No!

My personal favourite sight within 'Jaipur' was by far the 'Hawa Mahal'. Serving secrets for the gods, the 'palace' amazed with its intricate details, even the window frames had me mesmerised. On the other side of the famous display of windows, the interior of the 'palace' took me by hand to show me its former functions. The view from one of the viewpoints had me feeling all of kinds of love for 'Jaipur', the chaos of 'Delhi' was faraway, I adored that day spent in 'Jaipur!' It hadn't been all roses, both hotels were less than satisfactory, I had my last nerve stolen during that last morning spent on the road! I just wanted a bit of breakfast! The two days spent exploring in and around 'Agra' and 'Jaipur' won't ever leave me! 'Jaipur' served substance, it appealed to me more because 'Agra' just had its 'Mahal' and 'Fort', all the same different with a real tough edge away from the tourist traps! I was so relieved to get back to my 'Grand Balaji' hotel room! Chill! A day or two back in DEL would be just the ticket! I made the best of my Paharganj street location. 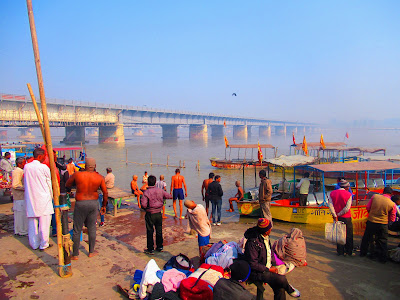 'Air India' so thoughtfully rescheduled my flight, twenty four hours later than originally planned! I managed to extend my hotel stay for an extra night, making a sorry situation better It had me stressed for one moment but I had a plan! I found the perfect filler for that final day in and around 'Delhi'. No, I didn't have enough time to visit 'Varanasi', after checking the trail of the the 'Ganges' I saw that 'Garhmukteswar' stood as the closest point from 'Delhi'. Picking up my car from my hotel, the drive that morning showed me lush green pastures with the odd small village for good measure. In no time the sacred waters of the 'Ganga' stood before me. That river held serious significance for the local population. Many people took their daily wash in the waters, hoping to find vigour and strength from the 'Mother Ganga'. Taking a boat ride over to the other side I was able to seriously appreciate the view. Yes, I washed my hands in the waters of the 'Ganges', I had to! Bless me! I would need all the blessings, I was about to become really unwell.

The riverside along the waters of the 'Ganges' bore many functions, I passed by the wood-stock used for the cremation fires. Their was the odd cow roaming around, that's India though! Getting some Indian sweets from a family run sweet centre had me feeling part of the 'Garhmukteswar' experience. The tented market area had me parting with some more money! Content with my purchases, sweets and the mighty 'Ganges', it was time to head back for Delhi. I thank 'Air India', them temporarily cancelling my flight gave me the opportunity to see such a sacred waterway. The 'Thames' flows with 'empire's' past but the 'Ganges' gave me a serious serving of 'renewal' and 'spirituality'. Varanasi section of the 'Ganges' will be bossed in the future! My week spent in 'India' showed me more, I enjoyed the crazy ride that it took me on! I will definitely be planning a future 'Indian' adventure with a beach feel tinged with a few 'Bombay' dreams! भारत, सुनहरी रहो! चलो अजनबी नहीं! 'India' is incredible! I will definitely be back!