Being back in England because of the Coronavirus hasn't impressed me all that much, getting up to Nottingham gave me something to look forward to. Taking in Old Market Square was nice and to clock the Major Oak at Robin Hood's own Sherwood Forest had me excited! In Bulwell, I found that famous charity shop! Notts history at the Lace Market! Laydeh, get back on that till! 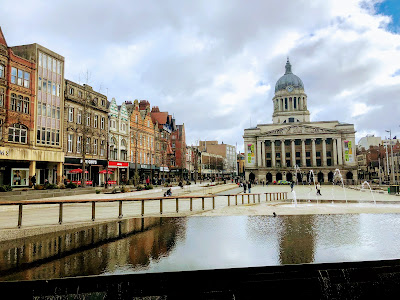 Leaving my Bilston home early on allowed me to catch my Birmingham to Nottingham Megabus without any hitches. I had a hazy plan but with enough time on my hands I headed for the city's Old Market Square as soon as I stepped down from my coach. Most of the city centre looked like it was being restored, so much scaffolding could be seen! I wasn't bothered with the history of the city at that point, where was Sue Tuke though? Bulwell would have to wait for me! The city centre street signs were helpful, without my China Mobile data plan I would be needing those street signs soon enough! I loved seeing the Council House as the focal point of the square, to the left I had period buildings that were busy shopfronts with people going about their business. Getting my photos quick, I felt an overwhelming feeling of 'reverse culture shock'. I would be feeling more of that later because life in China has changed me! Sure, Nottingham had more for me to see and to appreciate! I felt as if it was a case of good timing! Corona, no second chances!

Nottingham had been a city that my Nanjing friend, Chris had lived in. It was a shared excitement in one way because I was being told some funny stories about his time living in that city, with kind recommendations along the way. Where was I going to go next? Taking a moment or two within Nottingham's Old Market Square felt like the right thing to do. The city of Nottingham was serving all kinds Victorian realness, the abundance of 18th century architectural opulence had me thinking that I was in another time period! I love living in China but nothing compares when I get to see British period features! The reason for my Nottingham trip was to get out of the house, to see some place that would give my blog a new English directive because I seem to be a lover of Asian places. Getting up into Nottingham's raw city nature, I could tell that the city would show me many interesting characters! After listening to the local folk, seemingly sounding friendly with a sense of normalcy. Sue, where were you? 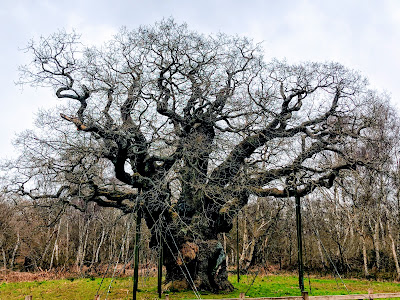 I got a little distracted for a quick second I missed the 12:30 Sherwood Arrow bus from Victoria Bus Station, that hourly bus service would take me to the famous Sherwood Forest. Breaking change for the bus reminded yet again that I was back home in the land of cash, the lack of mobile pay features had me running to change up some money! To be fair I was enjoying my freedom after being in the hotels for over one month! Leaving the city of Nottingham for the greener pastures towards Edwinstowe Village allowed me to see some lovely countryside views. Looking for the Major Oak had me following the forests path, I remembered watching 'Maid Marian and Her Merry Men when I was younger. I was half expecting to see her and her compadres skipping through the forest that rainy March afternoon. I wasn't going to see them but I was loving the scenic views with the threatening showers keeping people out of my way! My a stroke of luck I had the forest to myself! Nottingham, where was that Major Oak? Such a way!

I found the Major Oak without any issues! I marvelled at that wondrous tree that looked amazing for its 800-1,100 years of life! The tree had significance from the times of Robin Hood, the figures blew my mind but the real life view impressed me much indeed! The facts about the jays with the acorns hammered home that nature has largely helped the Major Oak last the test of time, the fence was introduced in 1975 because people just didn't have respect for the soil that got disturbed at the bottom of the trees impressive trunk. I remembered my time at Dengfeng's Pagoda Forest near the Shaolin Temple in China, it would have been lovely to have not had such a fence getting in the way! Being mindful of the time I made my way back to the bus stop, I wasn't about to be stranded in the village of Edwinstowe because time was pressing on and my hostel was away in the city centre. With no mobile data it was heaven to be helped, I found my hostel, it wasn't the nicest place but it was centrally located. Time for a McDonald's and sleep. 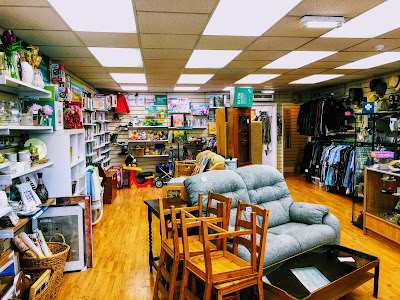 New York, Paris, Milan & Bulwell! I had a duty to hit up Bulwell before my Birmingham bound coach would leave Nottingham that afternoon! Taking the tram from the Lace Market had me making moves towards Charity Shop Sue's own store! Not an online personality, I saw her own shop because yes she's a manager! Passing the Bullwell Bogs I didn't want to waste any time, I was starstruck, so 'Scuse Me Laydeh!" Bullwell had hits of Bilston, with the outdoor market it reminded me of my hometown! I didn't see Sue's usual volunteers but to be within that famous charity shop made me feel like I had a second hand chance for sure! She needed to get back on that till! Becoming an icon for the LGBT community and a known fan of Rupaul's Drag Race, I hope to see Sue Tuke, Manager branch out into other ventures in the very near future! I don't care what anybody else thinks about my visit, I loved Bulwell! I had hoped that I would be able to see Sue and her volunteers at the shops but that wasn't so. I did see people wearing masks!

Clearly, I had big plans for my trip to Nottingham, getting up to Bulwell to see Sue Tuke, Manager and her shop was the one! She had her work cut out to spread the word of charity to the world to make each one of her customers look like a bloody star with her award winning makeovers! Content with my Bulwell explorations, I boarded the Nottingham Tram back down towards the city centre. Casting my mind back when several people at my hostel had asked me why I had chosen to visit Nottingham, I told them that it was to see Charity Shop Sue within the Bulwell town outside of the city of Nottingham. I loved Bulwell with all of its normalcy, the tram allowed me to zoom in and out of the city without taking lots of time. Bulwell had been everything that I had wanted it to have been, the bogs presented themselves just as they did in that renowned YouTube series. The Lace Market had me walking back to the Nottingham Tram, bidding a fond farewell to Bulwell, the shop and Sue! Out of Bulwell it was time to make tracks. 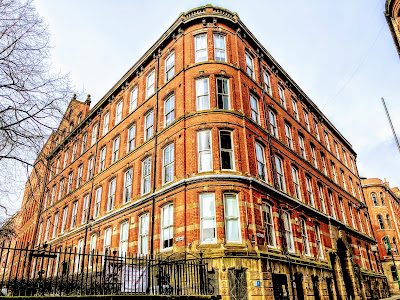 The Lace Market? The final chapter of my Nottingham overnight trip was my visit to the city's Lace Market area. Once a powerhouse for the garment production of lace and with the master hosier's calling the shots! Before my trip I had no idea about Nottingham's garment trade, thanks to some time spent at my Grandparents I saw a television programme that featured an auction in Nottingham, paying much reference to the former craft, graft and social in-justice those workers faced. It was apparent that the production of lace products didn't stand as the current trade within Nottingham's Lace Market during my 2020 visit. I wanted to see through the renovations, to see what the stories stood behind the period factory buildings. During my pre-trip research that Kayes Walk within Nottingham's Lace Market oozed the current amounts of 'Victorian Lace Making Realness!' Nottingham's lace past had schooled me thoroughly! The contrast between Shunyi had me feeling far removed, people carried on like things were normal.

The Lace Market was my contingent, a few days before my departure to Nottingham I found out that the city's castle was closed due to major renovation under a National Lottery grant. After my visit to the Lace Market I tried my luck to see the castle, it was impossible to see anything inside the castle walls but I did see a statue of the famous legend Robin Hood. My time in Nottingham had been short but I had made sure that I had seen everything, I hadn't left anything out during that overnight trip! Using that industrial revolution reference I used the Lace Market as my fourth element, paying dual attention to the castle even though it was being taken care of at the point. My final steps in Nottingham were walked along the canal towpath near Castle Wharf to see the British Waterways building. Catching the coach back to the West Midlands I got talking a Chinese student who proved to be good conversation throughout the journey to Birmingham. She was from Ningbo, what were the chances of that happening? Sue Tuke, I'll see you soon!

Nottingham, Get Back On That Till!