My final night in NYC set my full packed trip on fire, the very same afternoon I hadn't long stepped down from my Philadelphia coach! Negotiating my price in the heart of Times Square had to be done, I promised my students something from New York City! Before my Frozen Musical show on Broadway there was one sweet reunion left! Was Val hiding? Oh, it was chaos! 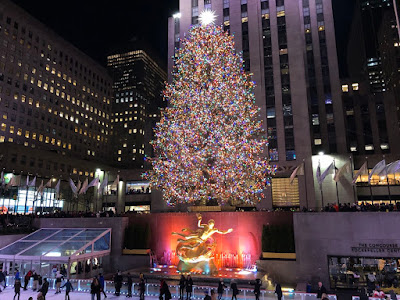 Leaving my Megabus behind me, I bounced over to Times Square to snag some souvenirs for my students. Finding some fridge magnets I brought out my China negotiation skills, the guy was playing me for a fool! No, I got my price and moved onto McDonald's in the heart of Times Square. Watching the million lights whirl past as the billboards advertised anything and everything felt surreal. I was back, it felt correct once again! Zipping back to Long Island City, I practically raided the corner stores, I wanted all of their candy! Freshening up and packing before heading back into the city, I was already on a mission, clearly that mission hadn't ceased since my United flight had landed the previous Saturday! Getting myself together, it was time to take the NYC Subway back into Manhattan for the final time, well for that trip anyway! The Christmas lights weren't going to wait for me, neither my friend Valerie! To think I had awoken seriously hungover in Philly that morning was a miracle I had made my Megabus back! Blessed!

Going back down memory lane, I got lost a little bit within the crowds and telling the truth, my phone signal started to falter. Within the maddening crowds I found a few chaotic opportunities where I got to use my Chinese language skills! The rules pertaining public order were being taken very serious by the NYPD that evening, I paid much attention! Catching the magnificent Christmas tree below the Rockefeller Center had me feeling all kinds of feelings, it had been some serious time since I had that 2012 Christmas Eve moment! The ambiance was typically tourist, I loved every second whilst I was in the zone, not paying any mind to the cameras or the excitable passersby who all wanted a slice of the NYC action during that pre-Christmas moment! Our phones were not working! Myself and Val had worked together during 2012, seeing her face after those years I could say she looked more beautiful! Getting to spend some time with my favourite Filipina was like magic! Our meeting at Pret was brief but so worth it! No mistakes! 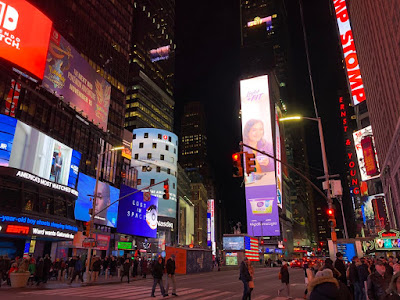 Saying goodbye to Valerie wasn't easy, I had to make my show! Thankfully I was able to use my maps to walk from our Pret A Manger hangout to Times Square. I felt very fortunate that I was able to see one of my forever Hallmark Aviation/Virgin Atlantic sisters, the next day would allow one final reunion. During that meeting we spoke about life and if truth be told I had intended not to entertain certain people because they only made the effort after I had landed into New Jersey, USA! My comeback was not about attracting attention, it was about so much more than that! Anyhow, the mesmerising lights of Times Square had me feeling those 2012 nighttime vibes! One million lights amazed me in that moment, I felt very blessed that I was able to see Times Square during the daytime and then in the evening, time had been pressed but that NYC landmark had got my timekeeping skills operating fine! Times Square had not slowed down, I had waited so long to stand in that moment, I savoured that moment! Get it, Times Square! OK!

Had things changed? Not one bit, I appreciated the vibe but I wasn't going to get caught up in the hype. Times Square had been one of the first places that I had visited during my first days in 2012 after moving to New Jersey for my work placement. I had returned independently, I hold no bad feeling toward one of the girls I had visited Times Square with but time had ousted the negativity with the other individual. It was a full circle moment, for that reason I paid attention to the lights and sights that played out in real time motion. My show would be starting very soon, I say goodbye to Times Square before making my to NYC's St. James Theatre. The week long experience had been intense, memorable and damn amazing, to have gone down memory in so many senses and to conclude things in the heart of Times Square's dazzling lights felt correct once again! I had one more meeting with Times Square, that would be after the show, the 7 train had my back! I didn't know when I'd be seeing TS again, let's reconnect in a few! Sure? 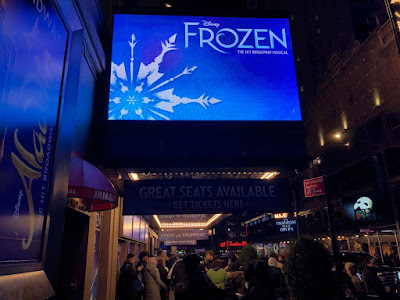 Taking my seat on the last row within the central mezzanine level at NYC's St. James Theatre, I waited patiently for Disney's Frozen on Broadway. I had originally wanted to see Disney's Aladdin fly its magic carpet but Frozen proved to be more economical, Elsa persuaded me to let that original musical choice go! I hadn't been to the theatre in such a long time, I think the last time I saw a show was in London during 2014? That show was the green themed, Wicked! Why had I not been to the theatre in such a long time? Let's just say in a certain Asian country their isn't much call for etiquette or appreciation to give the performers the applause that they deserve! Saving my coins, I travelled to NYC to see Frozen, I was ready to sing-a-long with those famous tunes from the film! Singing during the show by the audience was prohibited! Lights down, curtain up, my love for the theatre returned naturally! My final evening with the show started couldn't get any better! I remember now I saw the Han Show in 2016! On with the show!

The show started with the usual pace, references from the film had been written in well and other stories blended the key numbers together, they filled the gaps where necessary. The first songs played out nicely but I was ready for 'Do you want build a snowman?' The show was easy to follow but I was waiting for 'Let it go', sure enough before the intermission that anthem was belted out with energy and spirit! The second half of the show impressed me with its inventive storyline, seeing a show that was originally a film gave me the sense the writers had to add a little substance to the stage version. With the finale nearing and Frozen 2 already in cinemas at that moment, it was really interesting to see Elsa turn the stage into a series of autumnal colours! With the cold no more, those greens and brown tones definitely teased another Frozen stage show to be debuted in the future! With the songs of the musical in my head, I made it to the NYC Subway, a sadness filled my heart as I realised my trip had ended! Oh, I love NYC so!