The journey back to Beijing, China takes long enough, choosing Birmingham Airport once again made getting to airport a lot easier. Making use of KLM's short connection from Birmingham to Beijing through Amsterdam allowed me to arrive in China without any delays. Sorry Birmingham Airport but you really need to step up those international direct flights now! OK? 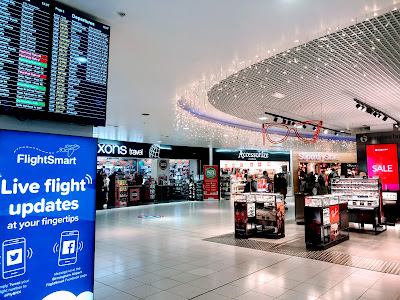 Check-in had me shocked, one of the Passenger Services Agents had a foul look on his face! His KLM/Air France colleague apologised profusely for his unprofessional demeanour, she checked my bag in without any issues and apologised further even when it wasn't her problem. Karma from the sour staff member meant that I had unknowingly been allocated a bulkhead seat! Proceeding towards the security checkpoint at BHX meant I had to say goodbye to my parents, with those farewells in order I proceeded through security. I was pleasantly surprised how streamlined the process was, I passed my compliments onto one of the security checkpoint officers. The previous December I chose to fly from Manchester Airport, the security checkpoint before departures was an utter mess compared with Birmingham's stress-free pre-departures security check. Manchester should take several pointers from Birmingham's operation, for that I was impressed! Fair play BHX, but we need more direct long haul flights! BHX, come on now!

Tracking the inbound flight that would be coming from Amsterdam revealed a slight delay, I wasn't worried because the airline had to honour our tickets if we missed our connections. I got speaking to a fellow KLM passenger who was also going on to China from Amsterdam, she appeared to be quite worried but I reassured her in Chinese that there wouldn't be any need to worry. I didn't need any beverages that afternoon before my flight because I had to be focussed, I could wait for the flight over to Beijing, China that evening. With a boarding gate announced it was time to proceed further before boarding would be commencing. The inbound KLM flight from Amsterdam had arrived with enough time to spare, it would make the time up in the air and it was only a short flight. Taking to the skies, we were served a sandwich box with either a hot or cold drink. I asked if the refreshments would be complimentary because Aer Lingus Regional charged me! KLM had me sorted over to Amsterdam without stress! Make that time! 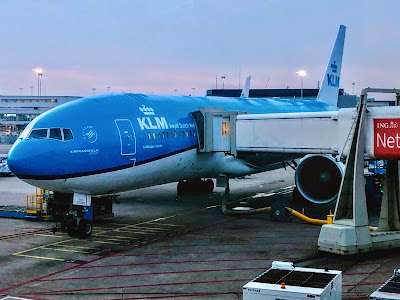 After touching into Amsterdam's gargantuan Schiphol International Airport, my KLM City Hopper flight taxied to the dedicated stands for their smaller European based aircrafts. My Beijing bound KLM Royal Dutch Airlines flight would be boarding within thirty minutes after the Birmingham flight had fully disembarked. We were bussed to the nearest drop-off point that led to connections and arrivals, I for one ran for my life towards the escalators that led to the international concourses. Confirming with some fellow Beijing passengers in Chinese I had the confirmation that I was going in the right direction! Thankfully I arrived at my gate with plenty of time to spare, the boarding process was quite lengthy so I took some time to marvel at the amazing photo opportunity I was bestowed. My aircraft was being prepared for the flight to Beijing from Amsterdam Schiphol Airport. The queuing system was something to be desired, I didn't appreciate the chaotic nature! Yes, KLM's new bluey livery impressed More flying high!

Bluey? I had shown the KLM 'Bluey' series to my former homeroom kindergarten class, they loved the adventures that the little KLM jet experienced during the cartoon. My Boeing 777-200 wasn't the Dreamliner that was originally scheduled, I took that change in my stride because I couldn't change that factor. I had tweeted KLM well before my departure date to see if the aircraft change was correct compared with the reservation details I had on my Trip.com account. I had wanted to fly on a Dreamliner. Boarding for me came around, I patiently waited for the economy cabin to board on this China bound flight I didn't want any drama to arise. Luck was on my side, my Beijing seat was on the bulkhead row and better still the seat next to me to the left was empty! My KLM Royal Dutch Airlines flight from Amsterdam to Beijing would only take nine hours! If truth be told, I was content with the flight time! I was excited to experience the in-flight entertainment and customer service during the flight. No Vengaboys in the music section! 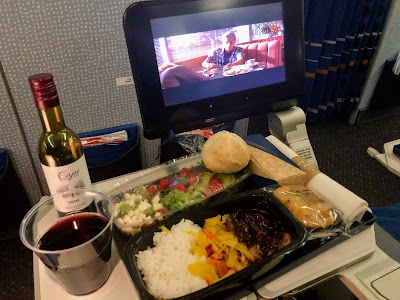 Loving my actual living life, I completely relaxed into my bulkhead seat, I had plenty of room to not feel restricted during that long haul flight. I didn't have a seat-back screen so I took out my screen from in-between the seat to the right hand side of me. I browsed through the film titles to see some seriously good contenders for that Beijing bound flight. Choosing to watch 'Pulp Fiction' was the one for me, I waited for the meal service to begin before I started my film. I had enjoyed a lot of rich home cooked food at home in England, for that reason I chose the oriental option for my meal. The attentive KLM crew passed through the cabin with the first drinks service of the flight, they spoke English excellently and always had natural looking smiles on their faces! Not being a fool I had opted for a few red wines because the connection between flights had been quite rushed, again it was nice to relax into my seat onboard KLM Royal Dutch Airlines. Let's get back to Beijing, China! The holiday had been ace, it was time for work! Yes!

Getting into my film, I absolutely loved my economy class meal, I even ate the salad and I never ever eat the salads provided onboard a flight! Pulp Fiction was a really twisted 90s film, I really enjoyed watching it! Half way through the flight I went to the rear galley to ask the cabin crew if they accepted photos to be taken with passengers, they were very gracious but due to company policy they had to decline my request. I respected their response and for the company policy in place, overall the cabin crew that were on board my KLM flight from Amsterdam to Beijing were really friendly and attentive. Morning came around with the final service of the flight, I enjoyed some caffeine and the cooked breakfast option was much appreciated. I felt that the services offered were exceptionally good for present day economy class. It felt like such a relief to finally arrive into Beijing's Capital International Airport, my two week holiday had come to an end with those three long flights! I would definitely fly KLM Royal Dutch Airlines again! Dank u, KLM!