Flying high again, it had only been one week since I had arrived into Newark Liberty 'EWR' Airport with United from Beijing! Making my way from Long Island City to JFK's Terminal 5 allowed me to have brunch with a missed sister friend! Going green to the Emerald Isle with Aer Lingus, my New York JFK flight to Dublin would be my first with them. I was utterly exhausted! 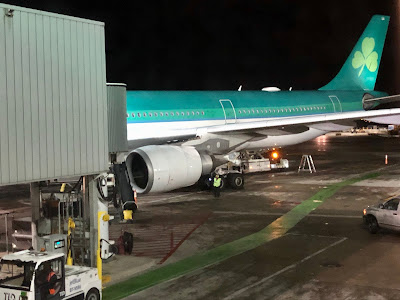 My American adventure had come to an end, all packed, I found myself all checked out of my Local NYC Hostel. Heading over to Sandord's Astoria for brunch with my sister friend, we worked as Virgin Atlantic Clubhouse superstars during 2012 at Newark Liberty International Airport during my work placement. Picking up where life had last allowed us to meet in person, we looked forward to the future! Real talk resumed, from the bottom of my heart it was just the best thing to see Fiorella again after our parting! With our brunch enjoyed and future Miami plans confirmed it was time for us to say goodbye one more time, stepping onto my JFK Jamaica bound Subway had to be the one! The JFK Air Train had me on the right track, seeing the different aircrafts and airlines had me living because I love aviation with all my heart! Terminal 5 came around, heading for the check-in, it was time for Ireland! I was so excited to see my first nephew! Yes! Would Aer Lingus be anything like their Irish flying cousin? Surely, not? Phew!

Checking in at the Aer Lingus check in counters allowed me to clock the nature of the New York JFK based passenger services agent, I knew the way the communication would be with that NYC and NJ chat. Checked in with no complications I passed through the TSA checkpoint without any issues. My side of T5 at JFK didn't have any immigration checkpoint, for that reason it made sense that Aer Lingus pre-clears passengers bound for North America before they depart the Republic of Ireland. Checking the flight through an online flight tracker allowed me to see when my Aer Lingus EI108 flight arrived as the inbound Aer Lingus EI109 service from Dublin to New York JFK. Seeing my green and white aircraft turn into the gate gave me the excitement that I was making my home to Birmingham Airport, England via Dublin. Not needing immigration clearance to enter the USA, the inbound passengers disembarked quickly, going onto collect their luggage! With those expressed pathways, Aer Lingus had made good choices for their pax! 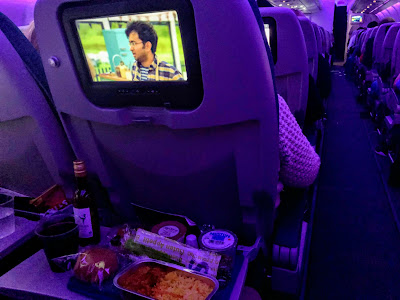 Pushing back on-time, soon enough my Aer Lingus Airbus A333-300 had taken to the skies bound for Dublin's own international airport. Flight EI108 certainly served humour from the flight deck, those reindeer jokes were amusing to hear, nowadays pilots don't usually makes jokes during their announcements. Things were done differently on Aer Lingus, soft drinks were complimentary whereas alcohol beverages were available for a reasonable price. Wanting to have something nice to drink, I purchased two small bottles of red wine to accompany my chicken curry. Drinks were served early on into the flight, keeping to my blogging protocol I kept my drinks grape based for the meal. The meal itself tasted good, I liked that a small tub of ice cream that was served on the tray. I had definitely made a good choice! Overall, the meal choice was a good one to make! Would I be having a few more wines? On my second long haul flight in less than ten days had me feeling thankful the hop over to Dublin was not 14 hours long! No!

The flight from New York JFK to Dublin was under six hours or so, I wasn't bothered with full length films because I sensed that I was going to spark out at some point after the meal service. Choosing to watch short comedies and dramas was what I did during that Ireland bound flight. Starting off with some 'Friday Night Dinner' then I enjoyed 'The Great British Bake Off'. If truth be told it was nice watch a few short television shows from the comfort of my Aer Lingus economy class seat. The in-flight entertainment on-board my Aer Lingus flight Dublin stood to be new with a very modern design. The whole cabin itself looked like it was either brand new or had not long been refitted. My meal was tasty, wine was fine and the entertainment kept me occupied throughout my flight from New York JFK all the way across the Atlantic Ocean to Dublin, Ireland. My week in New York City, Newark and Philadelphia had been mad crazy, to sit back and relax for that flight was bliss! It was home time! Would the crew have the craic? Yes! 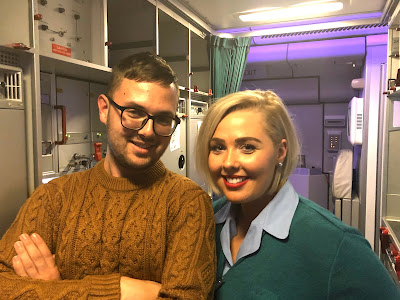 Ireland is famous for having two airlines, one has been slammed for its treatment of its crew and has a cold 'no frills' model. Aer Lingus, let's have a little laugh about the airline who must not be named? Ryanair wasn't an option because they haven't broken the UK/Ireland Transatlantic model just yet, I chose Aer Lingus because I knew better! Back to the cabin crew, my Aer Lingus crew that looked after our flight to Dublin from New York JFK were friendly and approachable. After I found that I didn't have any earphones to watch my programmes with, I asked one of the crew members before departure if she could help me with my earphone situation. One of the other crew members also advised me that I would be better buying two drinks in order to not miss the drinks service before the meal would be served, that advice had me ready for my blog worthy shot and the second bottle of wine helped relax me into the flight. Yes, after my hectic NYC Subway from Astoria to JFK's T5 via the Air Train, that second wine had me feeling better!

Half way through the flight I made my way to the frontward galley to see if any crew were about, I always ask politely for a photo with the cabin crew on any long haul flight that I fly on. I always keep in mind that different airlines have different policies and that some crew can be camera shy, I wouldn't want to be asked anything out of the ordinary if I was in their shoes! The crew on-board my Dublin bound Aer Lingus flight were chatty and even laughed about a joke I made about their 'no frills' Irish flying cousin. One of the crew kindly accepted to take a photo with me, I thanked them and took my orange juice back to my seat to continue watching 'The Great British Bake Off'. They had mentioned the company were in the process of changing their name badges to just feature their job title and first name, one of the crew had said to me that some passengers take it upon themselves to investigate on social media. Why would anybody want to do that? Aer Lingus, please believe when I say that I wouldn't do that! No! Oh, breakfast time? 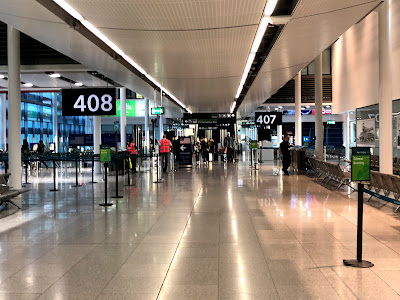 Landing into Dublin Airport with some time to spare, it was lovely to be closer to home but with one flight to go I needed to keep on moving! It was a relief to finally being able to disembark after one of the ground crew had messed up trying to fit the jet bridge to the aircraft. I made the right moves toward my Birmingham gate, I noticed outbound passengers who had just been pre-cleared before boarding their USA bound transatlantic flights. Passing through immigration at Dublin Airport was super easy, for that moment before Brexit things remained quite informal, I hope things don't change drastically! After clearing immigration it only took me a few minutes to find my ground level gate. The jet lag had hit me hard, the overnight flight was comfortable but I didn't feel like sleeping all that much. I could tell something wasn't quite right, I knew my Aer Lingus Regional EI3264 flight to Birmingham was delayed. It was due to the late arrival of the aircraft from the previous flight. With my previous airport know-how I was 100% right! BHX!

Sensing that boarding was going to happen within the next five minutes I waited at the opening of the stanchions, my previous airline experience told me the gate agent was ready to allow us to board the bus. Within about ten minutes, myself and the rest of the passengers were bound for the awaiting Aer Lingus Regional EI3264 flight. Dragging my hand luggage up the aircrafts own stairs was something that I didn't want to do! Within five minutes the doors had been closed, my propeller plane soared towards the Irish Sea. Finally, I was on the way home to see my family in time for Christmas 2019! Making our descent slowly into Birmingham, the scenery looked so picturesque, I had never appreciated the beauty of my own country properly until that point! Landing smoothly into Birmingham Airport, things hadn't changed one bit! As we were being bused to the terminal, Ryanair had come back to haunt my jokes whilst on-board that Aer Lingus flight! It was no joke! Without anymore delays I was able to go home! Thanks, EI!