Flying across the Atlantic Ocean to reach mother England was no mean feat, being back on British soil felt amazing during that December 2019 moment! My six day stay would flash past me, I had one special human to meet that I hadn't seen before that pre-Christmas visit. Bilston thought it had me back, not on my living life did it have me back! Yes, I was home to see Owen! 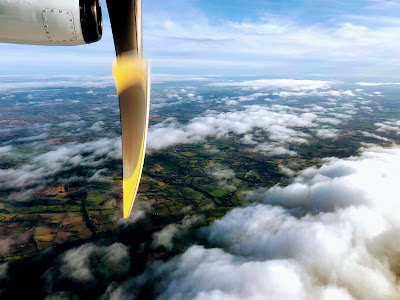 My journey to reach England had started in Beijing, China after my United Airlines flight left for Newark Liberty Airport, USA. After spending seven days in the States of New York, New Jersey and Pennsylvania, it was time for me to board my Dublin bound Aer Lingus flight, that would allow me to connect with my Birmingham bound flight with Aer Lingus Regional. Taking to the skies on my final flight of the day, the Irish Sea passed by quickly, before I knew I could see the Welsh coast that bordered England. The rolling countryside looked immense from up above! As mentioned before, I had never truly appreciated the beauty of my own country, the harsh concrete views that left me in Jamaica, NY couldn't be any different compared with the picturesque rolling landscape that I marvelled at as my flight neared Birmingham Airport. Was I excited to be going home? Yes B, I was feeling very excited indeed! The flights had me feeling exhausted but I was so excited to see my new first born Nephew! Oh, I flew those hours for him!

Touching down at Birmingham Airport a few minutes later than scheduled didn't matter to me, seeing the apron and terminal building once again made me feel like I was growing closer to home! The Ryanair flights had my inter-terminal bus waiting for such a long time, those jokes made on Aer Lingus had come back to haunt me. Making my way into the terminal building I knew that I didn't need to worry about baggage reclaim because I only had carry-on bags. Immigration also wasn't needed, I simply walked back into the UK through a door that allowed passengers from both Republic and Northern Ireland, the Channel Islands, Sark and the Isle of Man. Finding my brother wasn't difficult, he hadn't been waiting in the car park for long after I had surfaced from arrivals. In hand with a can of cider and a bacon sandwich it was a great Brotherly reunion! As we drove back to the Black Country it gave us the perfect opportunity to catch up! Yes, it felt amazing to be back in England again! Seeing Lewis again was golden! Yes! 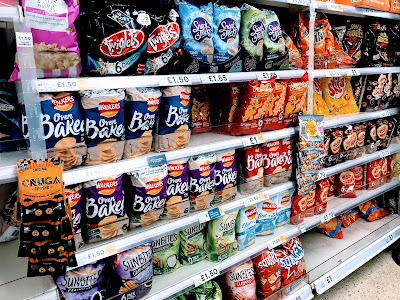 Rightly so my American adventure had been about food and drink from the very start, so my English sector wasn't going to be any different with Christmas on the cards! Leaving food out of the equation for the time being, we made a quick visit to my parents house to see how they were and for me to say 'hello!' Making it across the road to see my maternal grandparents was the best, its always great to see them after I spend the majority of my time working in China! They were doing good and at least in 2019 there wouldn't be any shocks or surprises, as the previous year I secretly flew back from India for Christmas! I wasn't feeling the jet lag badly at that point, I wanted to stay awake for as long as possible before going to sleep properly. Being back in Bilston felt good, it's a place that doesn't have much life but its home and family ties remain tight in that Black Country town. Next time I will try best to arrive at night like 2018. During that 2019 moment, my 2020 self sits in despair how things have changed! Time for Christmas! Go!

Supermarket shopping in China isn't mundane for me but it doesn't completely offer me the comforts of home, needing to pick some pre-Christmas shopping, me and my brother went to the local TESCO supermarket in Willenhall. For me it was like Christmas had arrived early, seeing the aisles laden with familiar foods with packaging that had only slightly changed since my last visit, it was visual treat nonetheless. I wanted some Walker's Crisps and some BabyBel cheese's, abroad its only 'Lay's' and BabyBel cheese in China can get quite pricy! One thing I really appreciated about having lived in China for almost five years at that point was the prices were so much lower in the Middle Kingdom! I wouldn't fancy doing my weekly shop in one of the big supermarkets in England, I'd go to ALDI and in Shanghai they are opening more ALDI's! I'll stay in China! Not hating on my hometown nor the prices in the supermarket, it was nice to have be home. Being on holiday at home was right nice! Of course, TESCO had that Xmas vibe! 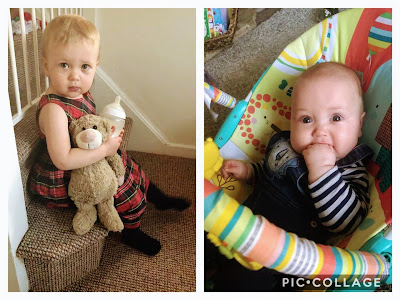 Before August 2018, going home was normal, but after my niece Orla was born that changed everything entirely! Going back the previous year in December 2018 allowed me to spend time with her during her first Christmas. Not long after I got the call that I was going to be an uncle for the second time, 2019s visit was made even more special because I got to see my nephew Owen for the first time since he was born earlier on in the year! At first Orla was like 'Who on earth is this person?' But throughout the week spent home, Orla became more comfortable with me and I got to see her free-styling to some Grime music, she's not all that bothered with nursery rhymes because she favours the melodies of Stormzy! Owen melted my heart, his infectious laughing had me thinking about why I had travelled around the world to see him for the first time! Every mile flown and ounce of jet lag was worth seeing those HB Babies! I'd give them my last penny but let's wait a bit longer for baby number three! We'll see about that! OK!

Seeing my Brother and Sister-in-Law with their growing family was beautiful to witness. Being called an Uncle felt great, as Brother's we may not have seen eye to eye as children but as adults I couldn't be more proud of his achievements and accomplishments made as a Dad! Enough of that sentimental language, it was time for us to prepare for Christmas! I had given Orla her Christmas present the previous year in monetary form to go towards her first passport and the rest for savings. Owen didn't understand what all the fuss was about Christmas, regardless of him not knowing I gave his parents the same monetary amount that I had given to Orla the previous Christmas with the same amounts to be spent on his first passport and then for savings. Having known a lot of people my age in China that haven't ever travelled outside of their country, my niece and nephew were going to have passports with the intent to travel during their early years as me and my Brother did! Whenever they get their passports, they will fly higher! 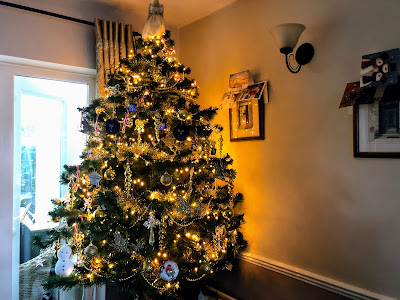 Christmas Eve was such a treat, I got to see my two aunties and cousins again after almost one year! The day was full of laughter, food and drinks and truth be told everybody was in good spirits because truthfully speaking, Christmas can be a really stressful time! I had really loved seeing the Christmas decorations in America during my week long stay, to be at my grandparents house to see the same tree decorated with the usual ornaments was priceless, to be within that cosy and comfortable environment was again worth every mile flown and every ounce of jet lag suffered! I didn't want a lot for Christmas, all I wanted to do was spend time with my family, eat delicious home-cooked food and drink lots of wine! I did ask for a few things, I asked for Jonathan Van Ness's new autobiography. For the Christmas week all I wanted to do was relax and have one night out in Birmingham before going back to work in Beijing. Birmingham? I went back for the night! I've allocated another blog to cover those shenanigans!

The festive period at home was great, everything was enjoyed in good measure and it was immense to see everyone in my family again. I had a lovely Christmas during the latter part of December 2019 but since I have returned two years consecutively, for 2020s festivities I'm looking to spend the time in another country. Going home was the tonic that I needed, its always a grounding experience and since living in China I always feel a deep sense of 'reverse culture shock' but as time goes by its lessening. Being able to see my niece and nephew made my year, feeling like I have something more to love has given me a new sense of feeling. We can't choose our family, for that I'm glad because I wouldn't change any of them for the world because they wouldn't want to change me all the same! Saying goodbye never gets any easier but technology keeps us in contact still. From arriving into BHX to seeing my niece dance to her tunes, the week was worth the distance. I was home but it was time to fly back to Beijing before I knew it! 回家!