Downtown Newark may have taken me out of my comfort zone a little, retracing those familiar steps from Newark Penn Station to find Ferry Street. My blog had started during my Ironbound days, eights years later since leaving on my VS2 flight I wanted everything Ironbound! I was craving dollar stores, Portuguese life and BBQ chicken! Being back felt like being home! Yes, NJ! 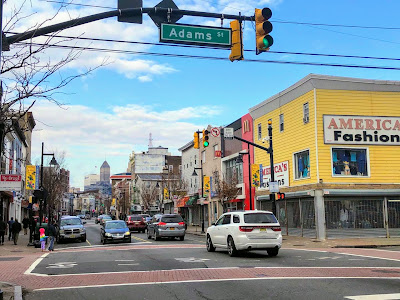 Downtown Newark was a done thing, walking away from the craziness towards Newark's Ironbound District. I had no clue about this Portuguese and South American infusion neighbourhood when I first arrived in February 2012. Getting used to the bus commute to Newark Liberty International Airport on a regular had me walking down Ferry Street in both directions, everyday I would get a lot of life from the Realness that fronted me. The European familiarity came from the Portuguese vibe, those egg tarts found me once again but in the former Portuguese colony of Macau in 2016! During that Macanese CNY moment I had a strong feeling that I needed to board a Newark bound flight quick-time! Fast forward to 2019, I had my chance to make those Ironbound dreams come true in real-time motion. Those first Ferry Street steps allowed me to recapture those Portuguese and Colombian Spanish signs and shopfronts! Was I imagining things? Those first few steps down Ferry Street had me in my feelings for true! Dios!

Hearing those languages from Portugal, Brazil, Colombia and other spicy locations had me transported back to a homely place. To not be hearing Mandarin Chinese felt truly strange but the Ironbound took me back into the fold, I was living! Seeing those Colombiano shapes displayed in the ordinary shopfronts gave me another slice of nostalgia, the South American spice continued because those local Ironbound gents were looking mighty fine! Ferry Street was burning up during that freezing cold December 2019 morning, los hombres estaban en fuego! I had recently had my McDonalds breakfast at Newark Penn Station so I wasn't going to be having anything tasty from 'Pao de Terra', but I remembered those mornings walking back from Newark Penn Station that would witness me enjoying one of the deep-fried ham and cheese pieces of heaven with a coffee that didn't come from a well-known chain! Yes, the blessed thing in the Ironbound, money was spent within independent cafes and corps. B, I knew what to do! 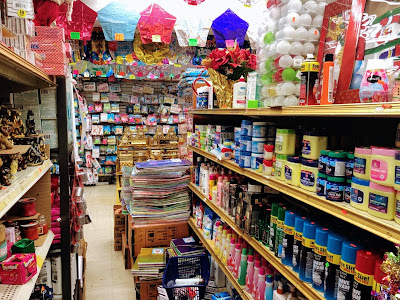 I had not been to either a 'Poundland' or 'Dollar Store' in a hot minute, so when I caught a glimpse of the first 'Amazing Dollar' along Ferry Street, I knew that I had to find a reason to pay a visit. Noticing that the next 'Amazing Dollar' as Adams Street grew nearer I walked in search for some detergent, all shall be revealed in the next post. The colours and crazy amounts of all manner of things that were on the shelves transported me back to those random days off where I would find some of the most crazy things in that Colombian inspired 'Amazing Dollar' store. My detergent was marked at one dollar but in true Ferry Street style they told me another price, in full Spanish I had totally forgotten my numbers! Paying with my well-earned coins I did not understand that Spanish language but politely said 'gracias' because that was the right thing to do! I was looking for those ordinary things from my days living in the Ironbound District, B! All grown up, I felt like things had come full circle! Well into the Ironbound groove, I was on fire!

I was feeling so fortunate to be back within the Ironbound District, I wanted to keep my head clear so no drinks at Blitz Sports Bar would be consumed that morning. Passing places like Seabra's reminded me when I would be gasping for a drink during those summer months and then seeing Dunkin Donuts, I would love my 'Dunkaccino' and 'Texas Toast' with extra cheese! Walking along Ferry Street during that time meant that I didn't need any gym membership because the walk to the station helped me stay trim, I crave for a route to work like that in the future because in my dreams I would love my Newark body back! As I reached Adams and Ferry Streets I took a little trip down memory lane, that brief moment away from Ferry Street meant more to me than I had expected that it would! I have to be truthful that certain places on Ferry Street had changed, but progression was the main result. New additions were present along that street but the vibe remained. We have to take time away, we then appreciate things even more. 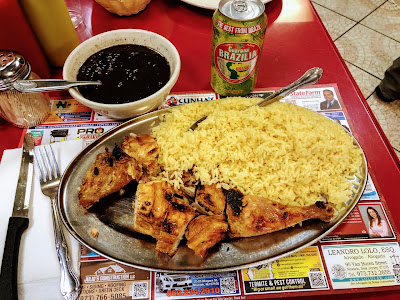 My go-to dining option along Ferry Street would always be half a chicken with rice and black beans, always washed down with a cold soft drink. I would usually get a take out because the large portion would last me up to three days, teamed with the protein, walking and lifting suitcases helped me slim down beyond belief! During my 2019 visit I wanted to dine in, the service was the same but the restaurant had expanded with extra seating available. I ordered my usual meal with a can of Gaurana, a Brazilian soft drink. Taking my time I lived for all of the flavours, the chicken tasted just the same with the black beans giving the rice a rice taste. The Sunday lunchtime trade kept the Ferry Street Barbecue very busy indeed! I was in no rush, taking my time I enjoyed my long-awaited Ferry Street meal! My first day back on the East Coast of the USA was everything that I had wanted it and more! Was it time to go back to NYC? Not just yet, I wanted to enjoy my food and soak up the ambiance of the busy Sunday service. Ahora!
I stopped eating my food when I literally couldn't find anymore space for it in my stomach, feeling full and very content with that much missed meal it was time to return to NYC. From crossing the tracks from Downtown Newark into Newark's Ironbound District, I was fronted with the same sights that gave me life for certain, things had changed slightly during my eight years away from Jersey but I loved Ferry Street all the same. The over the top nature of 'Amazing Dollar' transported back to those random finds and helped me find some detergent to wash my trousers at my previous regular laundromat. Keep reading for that hidden gem! Remember the locations by sight that held memories for me, let's leave those stories in the box where they should be. I devoured my Ferry Street BBQ meal before boarding my PATH train from Newark Penn Station. Getting back to Ferry Street within the Ironbound District gave me everything and more! Let's not leave it eight years again! Sejamos amigos para sempre! B, I will be back soon!