The timings had to be perfect, there would be no mistakes, no wrong turns because Newark's Ironbound had been a part of my life! I don't use laundromats as part of my China life, there's no sign of the local corner stores but those memories from Lafayette Street had vanished. With my promise kept, I arrived by PATH into Newark Penn Station! Britney Bitch was finally home! ¡Si! 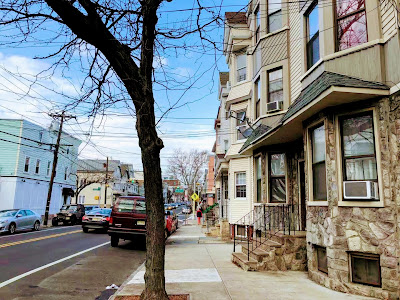 After making peace with the Downtown I made my way back under the tracks, entering Newark's Ironbound District to rediscover my former airport placement home. Taking the corner between Ferry and Adams Streets felt bizarre, it was like I hadn't been away at all! Seeing the usual places around the corner along with the familiar houses put me into a state of serious nostalgic love, it had been eight whole years since my last day that was spent in Newark, New Jersey. The familiar sounds had me back living that 2012 life for sure, hearing Spanish and Portuguese being spoken felt so normal to me even though I'm more likely to hear Mandarin spoken back in China. Making my way furthermore down Adams Street brought me with a very familiar corner, catching a glimpse of 'Madrid and Lisbon' fully transported me back to those days that I would walk to and from my Penn Station. I was hyped for Lafayette St! Those tightly packed three storey row houses had me feeling so at home, was in a time warp? I was in 2019!

Turning the corner on Adams and Lafayette Streets took me right back to the beginning, remembering everything as if it was the previous day I took one hot minute to soak it all up! Soaking it all up, I did just that! The intersection between those streets had me feeling all kinds of things, the whole feeling of the area had not changed one single bit, for that reason alone I was feeling immensely thankfully for the chance to see my former Newark home serving the same street style! One of the ground floor apartments within 333 Lafayette Street was my home for close to one year from February 2012 to January 2013, aside from living within the security of my Walt Disney World International College Program dorms I had never lived in such a down to earth and independent setting with the USA! Being respectful that 333 Lafayette was still someone's home I took my photos from the side as not to attract any unwanted attention because things can get really real in Jersey! Yes, it was a blast from the past! C'mon, Lafayette! 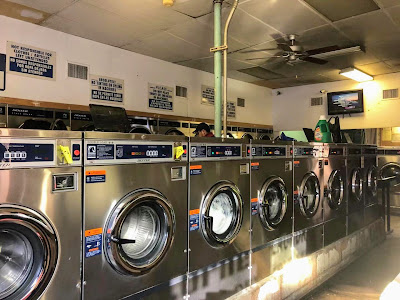 Within my Lafayette address not having a washing machine it was crucial that I found a way to launder my clothes and what not. Just around the corner on Elm Street I found my local laundromat, more commonly known as 'laundrette's' in the United Kingdom. I would visit this Ironbound washing house during my mornings after the early shift or during a lazy day off, I didn't have a regimented schedule but I made sure my airport shirts were clean and ready to go for the next spilt shift. Sitting in the laundromat during that 2019 moment felt utterly insane, it was a feeling of true normality. I had spilt some grease onto my trousers during the flight from Beijing to Newark the previous night so that was my excuse. Many of the low income immigrant families who lived in the Ironbound would frequent this humble laundromat, it made for interesting interactions and the chance to listen to their Spanish chats. Choosing my moment to grab a photo was tricky but it was fine in the end! Just like home! Cosa segura! B, let's go back!

Being my one shot opportunity, I had to get my photo without rousing any suspicions and to respect the local vibe of the laundromat. As mentioned, I chose my time and got what I needed! Successfully taking my snap, I then allowed myself to take in the views, whilst enjoying the Spanish music videos that were being played on the television, truly it was amazing to be back within such a place! My trousers had completed their cycle in the washing machine, not wanting wet trousers I counted my quarters and made my way over to the driers. As my washed trousers dried in the machine it gave me a chance to speak with a local mother who had dropped one of her clean socks onto the floor. We exchanged a few polite words and that gave me the chance to say how weird it felt to use English. She was amazed that I had lived in the Ironbound before and had taken the commitment to visit from China. The whole visit was perfect, so I had managed to find something to wash on my first day and had recaptured the warmth of the local people. Yes! 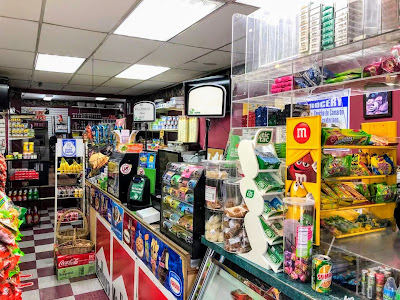 Now, when that New Jersey summer suffocated me with that heat I would always run over to the corner store across from the laundromat between Elm and Pulaski Streets. I would quench my thirst with either Sumol or Inca Kola because that's how it was done during those Ironbound summer days! It wasn't just the drinks that I needed during those summer washing days, I definitely loved my life when I found a Snickers ice cream! The period after I lived in New Jersey was a period of emptiness because in Birmingham I never found such corner stores, I severely underestimated the impression Jersey and its quirky corner stores would leave me with. After my trousers had been washed and dried, I crossed the street to the corner store that has been captured above. I grabbed the first can of Sumol because there wasn't any small bottles of Inca Kola, nevertheless it tasted so deliciosamente bom! Eu amo o Ironbound! It's really those small, everyday things that when revisited always mean the most to us! In that moment, I was in love!

Being polite I introduced myself to the lady who was behind the counter, I asked politely if I could take a photo of the store for my blog post and that the visit meant a lot after the eight years away. She accepted my request, in-exchange for the photo I bought a can Sumol because that Portuguese soft drink reminded me of my Ironbound days. It was such a lovely moment interacting with the lady who owned the shop, she couldn't believe that I had returned after such a long time and that going on from New Jersey, to add that I had been working in China for five years at the time. The whole morning exploring those three points had really been my main motivations to return to Newark. The flight had been long but the journey had been longer since my Ironbound days, the simplicity of the morning and the beautiful humans that I had met that morning had made everything worth it! I was ready for some Ferry Street BBQ, absolutely nothing was going to get in my way that morning! ¡Mi corazón latía felizmente! Amor, Newark!