Waking up from one beautiful 'disco' nap, my explorations around Brooklyn had me sleepy! I had faith during my pre-trip research. I hadn't drank much since arriving into NYC, I had only had a few ciders in Bushwick the previous day. Starting off at the hostel bar with a few Long Island's had to be done! Yes, my South Korean roommate made great company! ¡Vamonos NY! 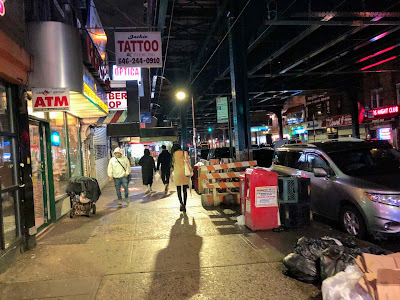 Dressing in my best, I found myself a seat at the bar within my Long Island City hostel. I wasn't about to leave the city without having a few Long Island Ice Teas in that neighbourhood that was aptly named. Along with my Korean roommate from my dorm, we shared a few drinks before I headed out to Jackson Heights. The conversation was great, we spoke about languages and the Korean Peninsula as I had been to both sides of the DMZ. He was very interested about my time spent in Pyongyang because it's not cool for South Koreans to cross the DMZ borderline. It hadn't been long since my weekend of craziness in Seoul, that also made for good conversation. The drinks were going down nicely and I hadn't even made it to the Subway at that point. Turning things blue, I opted for one Blue Long Island Ice Tea! The night was still young at that point, my disco nap and pre-drinks had me ready! I was ready for Jackson Heights! Slightly boozed up, I braved that Long Island City night for Roo's Av! ¡Estaba listo para pasar la noche!

Heading out of my hostel I headed for Court Square's 7 Train platform, taking the Subway towards Flushing to Roosevelt Av-Jackson Height Subway Station. I had made tracks the previous day to that area, half piecing together my route from my research and the previous day made things work somehow. Walking under the tracks gave me the sense for that colourful neighbourhood as the train crossed the tracks that were above me. I already knew where my drunk food would be coming from, that Colombian eatery had been found online after I had randomly googled photos of Downtown Newark. The Spanish writing on the shop front reminded me of my first ever Jackson Heights visit during October 2012, I had no idea about what kind of venues that could be found along Roosevelt Avenue in Queens, NY. Feeling thirsty I had my provisional driving license ready, I never need to carry I.D in China! Did I feel safe? Yes, I felt in-control and if truth be told the streets treated me well. B, I lived those elevated tracks! 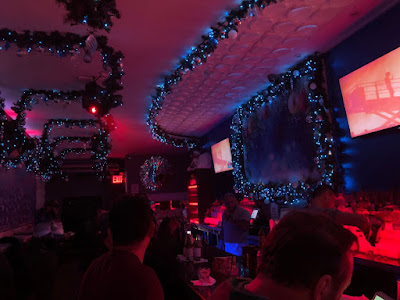 Jackson Heights had me living! Finding 'Friend's Tavern' was easier than I had previously thought it would have been! Getting my I.D approved I made my way for the bar, ordering Corona's to begin with seemed like something sensible to do. Getting into the beats, everything was mad Latino and that was fine with me! Embracing the Spanish music and drinks had me on the dance-floor, living my best life of course! The clientele were mostly speaking in Spanish, the guys I was speaking to spoke English just fine. Going for my first margarita had to be done, I took my first taste to be greeted with a huge tequila kick! Loving the music some more I enjoyed that Jackson Heights nightspot to the fullest! The drinks kept flowing and if truth be told I was living for my own company, I enjoyed my night and that was the only priority! The latin beats and drinks at 'Friend's Tavern was all that I needed within that Queens spot. Another margarita, but that tequila! Keeping those drinks ordered and downed, I was feeling amazing! Hoy se bebe!

Stepping out for a little bit, I made my way to 'Hombre's Lounge' to check out another Jackson Heights Latin Gay venue. Being a weeknight things were quiet but no quieter than 'Friend's Tavern' was. There was Spanish karaoke going on, getting my Corona seen off I made my way back to 'Friend's Tavern' for a few more beverages and a good dance on down! How my previous visit to Jackson Heights in 2012 had been during the daytime with no alcoholic drinks consumed, the Indian food enjoyed during that previous visit was equally as spicy like the talent during my boozed up 2019 visit. If I had visited at the weekend, those Latin go-go dancers would have impressed me much! Yes, for me to find such a venue that brought some different looks and sounds compared with my usual China nighttime venues. I enjoyed my last drinks before making my timely exit from 'Friend's Tavern', I had consumed enough drink and had danced for my life! Jackson Heights served fuego! ¿Comida? Yes, I was danced out and I needed food! Oh! 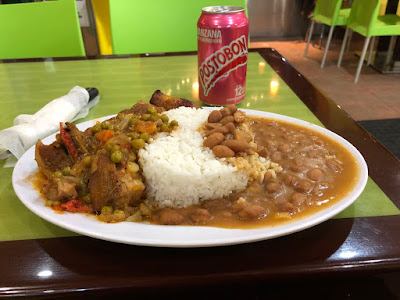 I was hungry like nobody's business, tracking down 'La Abundancia' during my walk from the Subway Station gave me those Colombian cravings instantly! Greeted with straight up Colombian realness, apparently they didn't have any menu so I asked the lady to put whatever she thought tasted good onto a plate. Grabbing a can of 'Postobon Manzana (apple pop), how badly I needed something to balance the alcohol that I had just downed between 'Friend's Tavern' and 'Hombre's Lounge'. Finding a table within the empty Colombian bakery and cafe allowed me to dig into my packed plate. I was getting all kinds of flavours, the beans in gravy blended so well with the meat that was on my plate. Getting my rice fix was more than appreciated, along with the plantain that had been cooked to perfection, I was living my food fantasy in that moment of drunkenness in the centre of Jackson Heights, Queens! La mejor comida! No, that food had me chowing down without any thought, I was in food heaven! Dios!

La Abundancia translates into 'plenty' in Spanish, I enjoyed my abundant Colombian plate of deliciousness! The music that was playing reminded me of Puerto Rican Reggaeton music, in that moment I loved the Latin American and South American vibe of that corner of New York City! After finishing my Colombian feast I made my way back to the same Subway Station that I arrived at a couple of hours before, getting the train back to Court Sq was surprisingly easy because I knew during early morning hour that my Colombian meal would keep me on the right track. The night definitely was a success, I didn't put myself in any stupid situations and best of all I didn't lose anything! Finding my hostel without any issues I had one of the best sleeps of the holiday, after that night my jet-lag disappeared! Jackson Heights gave me my NYC night out with a Latino spice! Let's just say the next day I needed five mimosas to bring me back to life! Getting the train back I was fine! ¡La ciudad de Nueva York lo sirvió todo! ¡Gracias Queens! Si!