Over the last four to five years 'Flying High...' has been an Asian affair, desperately seeking an American contingent had to be done! Sure! Paying the price I booked my direct United flight from Beijing to Newark/New York in May 2019, the eight year hiatus had been long enough, I needed Jersey! After packing my bags, it was time to make my UA88 flight to Newark Liberty! 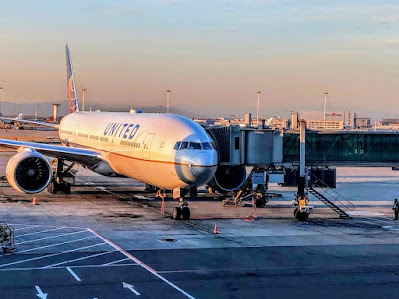 Reporting for my United flight to Newark Liberty earlier than needed be, I checked in seamlessly at Terminal 3 of Beijing's Capital International Airport. With my gate changed it felt like I had walked miles from E25 to E16, as if my luck would have had it, UA89 from Newark Liberty pulled into the gate just as I had arrived at E16 myself. I was not about to play! I excitedly took several photos of that Boeing B777-200, it had been such a long time since May 2019 I was just so excited to be finally flying back to Newark Liberty with United. Boarding time rolled around, things went smooth and before I knew I had taken my aisle seat, 33C. Embracing the fact my aircraft had served some miles in her years, I wasn't mad that the in-flight entertainment screen wasn't retrofitted. United are going through a massive fleet overhaul, I hope to get a chance to fly on their new Dreamliner rather than another well flown Boeing B777-200. Yes, it was time to fly high! UA88! Eight years in the making, this U.S bound flight was about to be the main event!
Why did I choose United? Claiming to be the 'Friendly Skies' I wanted to see if their self-professed approach lived up to real life motion. Shortly after takeoff the cabin crew passed through the cabin with a selection of drinks and snacks, I chose to drink a red wine and by all means it wasn't my only grape based beverage during that 13 hour flight over the Arctic Circle, no! Complimented with some 'Asian Rice Crackers' I didn't really care for the snack but nevertheless I took a chance. Looking through the IFE system gave me life, I had seen about Jennifer Lopez and Cardi B's new film, 'Hustlers' but had never seen it! I guess exotic dancing and extortion aren't things that would down well with a Chinese audience, regardless I shelved that title for when the meal would be served. Breaking some time up I watched one episode of 'Schitt's Creek', I had seen bits of that show before, taking the time to watch it properly was great! What would the choices be for the meal? Get it good, Unieesha! Get me to Newark! Brit! 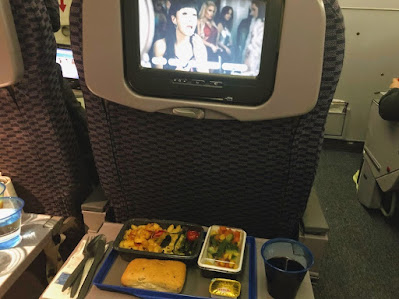 Unineesha? Yes baby, I had named my very own United aircraft Unineesha because of our destination had been my former home, she would fly me to the city of 'Ratchet Fabulousness!' Enough of that business, it was time for the main evening meal to be served within the cabin, my flight had almost cleared Chinese airspace so it was time that we ate something. I chose the pasta, I enjoyed my meal whilst I dipped in and out of 'Hustlers'. The pasta option was nice, the warm bread was a nice accompaniment and if truth be told bread was a luxury compared with the Chinese staple foods like rice and noodles. With another wine for good measure, I rated the amount of times that the crew were serving drinks during the beginning of the flight. I took my time with my food, the crew didn't rush things at all, that was appreciated because I was quite preoccupied with taking the photo to the right. We had ham sandwiches before we landing. OK?

After the meal service finished the cabin lights were dimmed to allow everybody to sleep if they chose to. Being too excited I made several trips from my seat to the rear galley to get more water and wine, I also wanted to strike up a conversation with one of the crew and sneakily observe their in-flight duties. Returning back to my seat to continue with 'Hustlers' gave me the chance to relax into that ultra long haul flight. 'Hustlers' was a really good film, only choosing one film to focus on through the flight gave me the opportunity to pause then continue when I felt like it. It was nice to talk with the lady next to me, she was Chinese and on her way back to her suburban South Philly home. Crew passed through the darkened cabin with small bottles of water, it was great to have my own bottle rather than just a small cup. Our sandwiches were served three quarters through the flight, I lived for that delicious chilled ham sandwich! Returning to the galley I enjoyed a few more sandwiches! So tasty! I was already on my holiday! 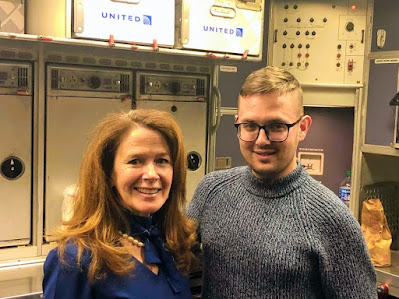 The 'Friendly Skies?' Yes, the United cabin crew who were onboard my United UA88 flight from Beijing to Newark were amazing, I'm not saying that because it sounds good, its the truth! Having a mixed age crew allowed for different conversations, also many crew were Chinese speakers so it gave me the chance to say some of the things my students say to me! I got talking to the 'International Purser' who was very friendly and easy to talk to, it was such an excitement for me to be returning to Newark since working at the airport, he understood I was very happy indeed! All of the crew onboard the flight were based at Newark Liberty International Airport, one crew member said that she can fly to China up to three times per month! Yes, every airline has its moments but I can say from my own experience the crew were happy in their roles and promoted the United brand very well! Would I get my photo? Of course! Yes, many Chinese mother both expectant and new certainly took that route on a regular, they did! Oh, I knew it!

I had already cleared it with the 'International Purser' if it would be fine to take a photo with one of the crew members who were not feeling camera shy, he appreciated that I asked in such a polite way as he expressed some passengers don't have that common courtesy and respect towards the crew. Four hours before landing into Newark Liberty I was standing outside the boundary of the rear galley, minding my own business and drinking my wine, popping my head into the galley I smiled at 'Terri' and asked her politely for a photo with her for this blog. She gladly accepted my request, I told her I had asked her because she sold what the 'Friendly Skies' motto serves from the United standards. The crew were overall very friendly and engaged in conversation with me throughout the flight, it was a truly worthwhile experience choosing to fly with United on such a special flight. Buckling up it was time for our Boeing B777-200 to make its finals into Newark Liberty, ready! Thanks, U! I was ready for those EWR redcoats to be blunt! 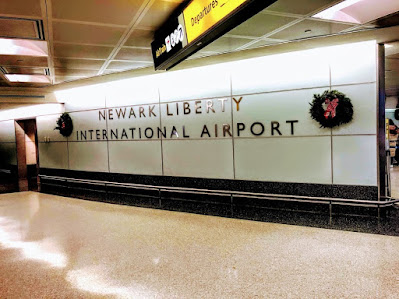 Planning my trip back to Newark was not easy, sure with being a British citizen I would usually be eligible to enter the United States of America with an ESTA. After taking a trip to North Korea in February 2019 I didn't think any of it but several months after that trip, any visitors wishing to visit the USA after visiting North Korea would need to apply for an official B1/B2 visa. Feeling the anxiety with potentially being refused entry into the States at Newark Airport I disembarked my flight with a feeling of trepidation. Before immigration I lived for the views of Newark's Terminal B, our gate was next to where my previous work placement airline would board. It had me feeling so kind of way! Teamed with that nostalgia, I proceeded to the customs clearing to be produced a paper slip that had a huge black cross on it. Making my way to see an officer filled me with pure dread. The officer was rather amused that I had visited the DPRK! Yes, many excited questions were asked by the officer, the perfect diversion because I was panicked! EWR!

I was ready for the 'red coat' to serve her Newark tone with me! It was everything I had missed and had wanted to be served! Complete and utter bluntness! Cleared and landed into the United States of America at Newark Liberty International Airport had me feeling utterly blessed! Clocking that the arrivals hall hadn't changed on single bit was such a sight to be seen. Clocking the Virgin Atlantic check-in process going on as I made my way to my transfer made me feel truly accomplished, I had worked hard to return to the New York area, things felt correct in that moment! Things in Terminal B were looking all shiny and new, meanwhile I was feeling jet lagged beyond belief, nevertheless overjoyed to be back at EWR Airport one more time! All in all, the experience with United was very good indeed with their friendly crew, enjoyable in-flight entertainment choices and that delicious ham sandwich, I would choose to fly with United in a heartbeat! Catching the welcoming sign at the lower ground entrance at Terminal B, I'm back!