So, after taking care of a few things after my Lost Plate Breakfast Hutong Tour, I arrived at Yonghegong Lama Temple Subway Station for the Evening Hutong Food Tour. Meeting with Emily, my second tour guide and the rest of the group. Yes, my time keeping was equally as bad but thankfully it was fine. Getting into my rickshaw ride with my first beer felt amazing! HBD! 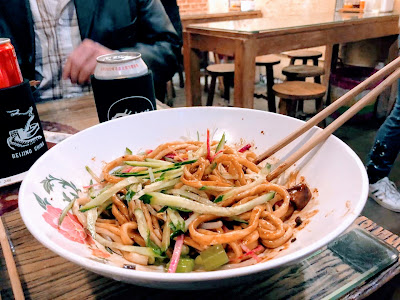 Driving away from the subway station into the dimly lit Hutong alleys gave me life for certain! After a short drive our gang of rickshaws arrived at our first stop of that Evening Hutong Food Tour with Lost Plate Tours. The restaurant felt cosy and we were made to feel very welcome, their speciality dish was Zhang Jia noodles. I adore that Beijing noodle dish, I was straight in their with my chopsticks to finish the whole portion! The others in the group were brand new to China, for that reason they didn't know what to think about the dish but my taste buds were loving life! Emily, our guide was friendly and she was able to recount the local features of the restaurant as a Beijinger, she knew what she was talking about! Leaving that endearing noodle house behind us, it was back on the road towards the second stop of the tour. Yet again the tourists from America in the group were fascinated about my life here in China. Although if I am honest, they were too typically tourist to understand how a foreigner could function. B, 真的吗?

Sitting down within the second restaurant allowed the group to get to know each other more, we had a quieter corner and the passing of the dishes was a great opportunity to talk with each other. People hailed from the USA, Ireland and myself being from England it was nice to have a familiar Irish neighbour at the table. The Chao Mian like filling worked so well within the soft pancake that we wrapped as if it was a baby in a blanket. The sautéed aubergine was cooked so well it almost tasted like potatoes because it had such a crispy texture, definitely a plus! Our second stop was set within a former Hutong dwelling where two rooms were actually being rented our for local living whilst we sat in the adjoining restaurant. I was so glad in that moment that I had four hours or so between the two tours as to let the mornings treat digest before hitting the Hutong during the twilight hours! Honestly, truly it was going to be another tasty affair with Lost Plate Food Tours! Another beer, please? I loved the 'off the beaten track' vibe. 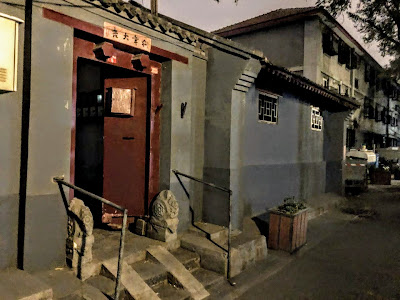 Going back out into the Hutong night scene it was apparent that we were away the tourist trap alleys, we wouldn't frequenting those during that night tour. Word on the street was that the area of the Hutong we saw was so clean and well secured because President Xi's mother-in-law was supposedly living in the vicinity! Now, that was a presidential connection of epic proportion! The others had spent little to no time in China, their experience with Chinese toilets wasn't too good but with Emily's quick thinking the ones we found were spotlessly clean! I was loving the detail on the door fronts that we passed between the second stop, the nighttime Hutong view had me loving Beijing even more! I had only ventured into the Hutong's once before around the Gulou area, only hipster style views on show! Lost Plate Food Tours had us covered! Nothing pretentious or shiny was on show for us, the Hutong alleys looked modern but they retained their ancient charm with their door fronts on-point! No, we didn't need Gulou at all B! 我饿了!

Back into the rickshaws it was time for us to drive through the city streets to reach our third location. I had met some people that morning during the Breakfast Hutong Tour who had were on the evening tour the night before, after hearing about their experiences I knew that the food would be delicious and the beverages of a certain kind would be flowing! So far I had met another group of interesting people but with that Irish connection it was easier to talk with them compared with the people from the morning tour, it was a cultural thing! But being a current Beijing expat I helped those American tourists during the morning, I was still gracious. No shade intended! The noodles from the first stop were just as good like my Beijing kindergarten serves their own version at lunch time. The second stop served us a delight addition, with the local area feeling humble and nothing like the lights that the tourists see! No, I don't really drink Baijiu, but since it was such an occasion I wasn't going to say no to a shot! My birthday treat was great! 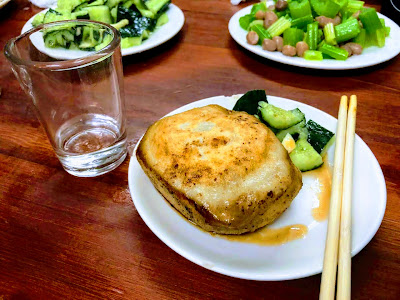 The roads in China are generally not a place for the faint-hearted, with a few twists and turns we arrived at our third venue. Being a Halal establishment it wasn't a place for boozing but that wasn't case at all, also dubbed as a men only environment I definitely scouted for the looks as we stepped into that lively testosterone filled eatery! I'm not a stranger to Halal food in China made my the minority people from West China but the tourists in our grew were being schooled that night! Seated upstairs it was great to see a family with more than one child enjoying their Saturday. One couple were making me laugh to myself, the husband was enjoying his drinks whilst his lady wife was not having any of his antics! Spirits were high, the beers were flowing and that helped the conversations as things became more relaxed the banter within the group made us all laugh out loud! Emily brought a bottle of Baijiu to the table! If that was my first night in China I would have been so shocked! Pushing on into my fifth year, I was very familiar.

Before we toasted with our Beijing Baijiu shots we tucked into our beef parcels, damn they were so delicious! Yes, those shots went down a treat! The male orientated venue reminded me of my former Beijing nightspots where its sometimes impossible to spot women! Getting back into the rickshaws it was onto out final eating place for the night, I listened to Emily speak to the driver and it sounded like we were going to have something that was barbecued. Yes, our modern Inner Mongolian barbecue served us some amazingly tasty beef with potatoes and mushrooms. Finding ourselves within a former factory setting, we all walked in a bar that by some miracle sold a fresh pulled pint of cider! Taking our seats I minded my business because the cider had me sipping like my life depended upon it! With the jet-lagged few needing their bed, the first members of the group left for their hotels. I made my night with a few more pints of cider, what a wonderful tour that Saturday night! The two tours in one day had been worth every Yuan!