Uncharacteristically early on a heavily polluted Saturday morning, I found myself in a taxi that was bound for my first food tour of the day set within Beijing's Fuchengmen Hutong's. Even thought I was running a little bit late that was all going to be fine, the timings of that food itinerary were flexible with Lost Plate Food Tours! Of course, I was the only 海外华人 around! 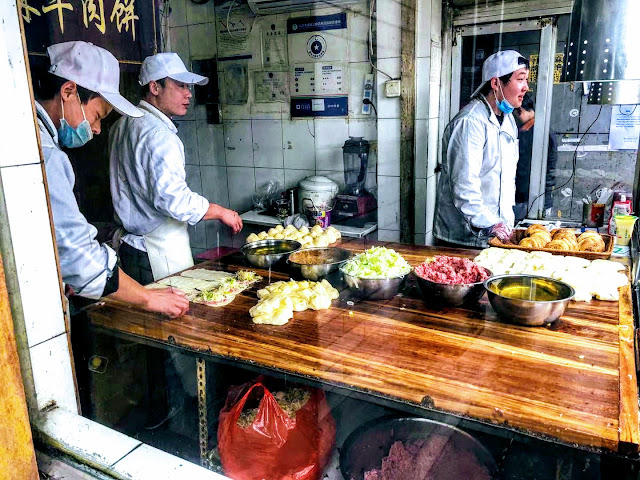 Meeting Kelly, my guide for the morning's Hutong breakfast tour felt like such a relief. Thankfully two additional people were yet to arrive before the tour could commence. Being a birthday treat, I had used some money to book tour of Lost Plate Food Tours in Beijing to get the best of the Hutong's before my 2020 move to Ningbo. The first foodie stop was only around the corner, taking our seats in a former temple like building we waited for our first slices of a Beijing breakfast. We all tried a series of weird tasting Beijing snacks, each obscured tasting bite held secrets from Beijing's past! I really enjoyed the cake-like treat because it wasn't so sweet. The fermented mung bean soup was definitely an acquired taste indeed, amongst such surroundings I wholeheartedly took the liberty to shock my tastebuds! The tour was just getting started, in the best way my Chinese was coming through amongst the tourists! More food, please! I would find that day, I was the only foreigner living in China in both of the groups. No, I wasn't mad at all!

The second stop found us standing in front of a glass-fronted cookout, three local cooks were preparing some tasty Chinese pastry like bakes! In full view for all to see, the wooden surface was spotlessly clean with fresh looking produce being used to make the beef filled delights. Kelly kindly ordered one bake each for us to sample, the cooks were amused to see us, a gaggle of foreigner's who were excitedly taking photos! Taking my first bite into the super hot pastry bake gave me so much, that beefy pastry snack had be fooled, no I wasn't eating anything made by Greggs! How dare I make such a comparison, such an insult because it was better! Connecting me with a familiar home treat from Great Britain, the second call during that breakfast foodie tour left me with high expectations for the next stop as we entered the winding alleys of the aged Hutong's that chilly Saturday morning. Knowing the city, giving advice to the American's who were visiting Beijing for the first time felt good. That beef bake set me up for the tour! 很好吃! 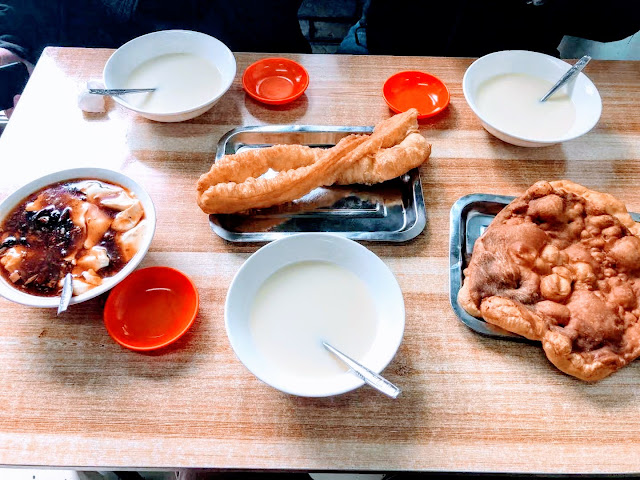 The alleys gradually became more narrower as we made our way into the Hutong area. I had already been to several of Beijing's Hutong's before that Saturday morning but with my time getting shorter before my move I wanted to appreciate every single second! Beijing has soo many! Admiring the doorways that individually told their own version of events to us, I was living for that! Our third foodie stop presented itself as Kelly ushered us into a small and local feeling family run cafe sized restaurant that was deep within the Fuchengmen Hutong. Ordering the soy milk had me slurping away like nobody was watching, the fried Youtiao served a familiar taste of life in China! The savoury tasting tofu bowl wasn't something that I would usually order because it wasn't like the sweeter variant that I had tried during my visit to Hong Kong, but it was all for the experience! Yes, the sweet doughnut like loveliness went down a treat with the soy milk! With my China tastebuds normalised I didn't have any issues. with those Breakfast treats.

Catching my breath and keeping it together, the food consumed during the first part of the Lost Plate Food Tour was very tasty indeed! Kelly our guide was very informative, asking me questions about my life in China and testing my Chinese language skills kept things amusing, I tired my best to sound like a local! Things were chilled yet we kept to the schedule, the recent sit down breakfast food had almost filled some of the people in the group but I was raring to go! Stopping for a freshly made Jianbing pancake was the one, the lady had put quite a lot of spice in my Beijing made Tianjin style all day Breakfast pancake even though Kelly had asked for it mild. I wasn't mad because I don't mind the occasional spice, that bite-size Hutong treat was just the ticket! Changing things up, I was celebrating the handing in of my resignation! That Saturday morning, the Hutong dwellers were busy out doing their bits and bobs whilst we were eating everything that was in our path! For all the food that was being consumed, money well spent! 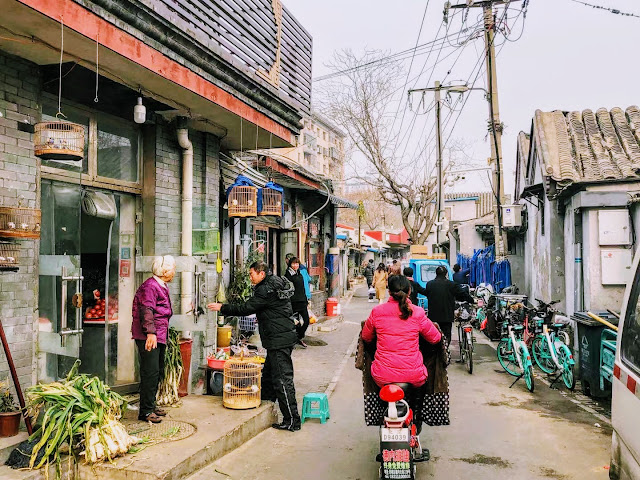 The busy Hutong scene around us was going off, people were out and about with their Saturday business to take care of! A real sense of Beijing could be felt that morning, being in the outer-bowels of the city's sixth ring road, it can be easy for me to forget what the beating heart of a city actually feels like! Before our Jianbing's Kelly had bought us a fresh mandarin orange, it was the perfect snack to clear my palette before the final foodie stop of our Breakfast Hutong tour that morning. Going a few paces over the way we found ourselves outside a whole in the wall, selling cured Halal meat it was a business that had a real sense of normality. To keep it real, one of the group members talked the talk but he wasn't willing to try the more delicate parts of the final snack. Staying true to the mornings theme I tried several parts of the Halal cured snack, it was just another day in China. Oh, I needed room for the evening tour! Not being a tourist, I represented #TeamExpat because that one tourist acted the fool! On with more food! Noodles?

Walking for a few seconds we found ourselves outside a noodle shop, that was actually the final foodie stop of the tour! Cramming inside the thankfully warm noodle shop, we were served a taster of the noodles to try. The shop stood as a firm favourite in the local area, prospering from healthy trading during the working hours of the workers from the nearby office buildings. Leaving a long queue behind us, the local people could continue with their noodle quest without six foreigners taking the tables up. Stumbling upon a lovely coffeeshop that was set within a rather modern feeling Hutong building served up a lovely hot Chai Latte for me! It was nice to restore some calm and connect with the group. The Breakfast tour had concluded, it had filled me up with the numerous stops that fed me up, the knowledge acquired helped me understand Beijing's unique Hutong lanes. From the history behind the fermented soup at the beginning to the concluding slice of modernity, such an education! Thanks, Kelly! Also Lost Plate Food Tours!