Singapore: Rollin' On The River!

Singapore took me back to the river, I knew that I wasn't looking for a ghost but remnants of S'pore's past motivated my visit! Taking certain colonial talking point into consideration, I embraced the waters of the Singapore River. Keeping those British colonial vibes present, a fort like park had to be explored but all I really wanted was a Singapore Sling! Rollin' On The River! 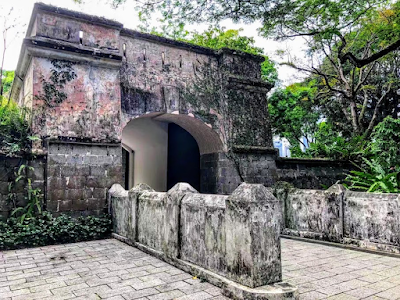 Bright and early I made my way to S'pore's Fort Canning Hill to learn more about its early British colonial features and its later fortification. Perched on a prime piece of land, the height of Fort Canning Hill gave the British contingent the seclusion that was required during the early days of British rule after the Singapore Treaty had been signed. Home to one of Raffles former residences, I opted not to visit that lavish white building that was currently featuring the Bicentennial exhibition. Backtracking for a moment, the hike up to the top of Singapore's fort like park wasn't difficult because escalators made the ascent very easy indeed. The humidity hadn't yet reached fever pitch during that Singaporean October morning, I could sense the rain would be pouring on down, I kept moving before the rain would follow. Captured above is the Gate of Fort Canning, if truth be told I wasn't worried about the details. Empire always interests me, it was intriguing to see how the British used the fort to spy on invading forces! Oh, the irony!

Making my way through the once fortified settlement, the park in modern day time served a lushness with its rich variety of exotic plant life. Was I close to the Singapore River? Yes, after I read the exhibits further that were dotted around the area outside the southern side of the fort gate I learned that this now park has been inextricably linked to the Singapore River that flowed not so far from that lush location. Descending from the peak of the hill I stumbled across a sloped lawned area, it reminded me of a Victorian botanical garden. I would be telling a massive lie if I said I wasn't looking for nuggets of information about the formative years of Singapore as a British colony. Fort Canning Hill allowed me to see something that emulated the former rulers of this city state. In present day, Fort Canning Hill stands as a reminder but more importantly a park, the history only remains for Singapore has stood independent from Britain since 1963. Reaching lower land, it was time to find those waters! So, where did Sir Stamford Raffles land? 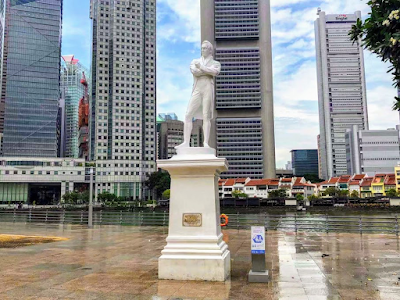 Singapore's Downtown Core allowed me to see the contrast between its British colonial buildings that stood beside the towering modern structures that currently dominate the city states own skyline. After catching a glimpse of the striking statue of Sir Stamford Raffles, I knew that I had arrived at my intended spot. On the banks of the Singapore River that stood before me, Sir Stamford Raffles docked along that spot on the 28th of January 1819. With his English Victorian attire carved into such a striking statue, it was easy to tell that Raffles was a well to do man during his time. Personally as an Englishman I felt quite proud that I was standing in the same place that Raffles statue stood, as Raffles negotiated his first treaty during that initial ten day visit after his first landing along the Singapore River. I don't know the nature as to how Raffles handled that deal, leaving our nationalities as the only similarity. Raffles wasn't a topic of conversation I broached during my trip, his visit or stay wasn't in good taste if the truth be told.

The backdrop served an almighty contrast, with two story riverside structures that functioned as upmarket bars and restaurants that were dwarfed by a whole host of skyscrapers. History states that Singapore was a modest fishing village before Britain's Sir Stamford Raffles steered his vessel into the Singapore, amongst his contemporaries Raffles helped push Singapore into world renowned trading hub way back when. Don't quote me, I'm not a historian whatsoever! Nevertheless, the opening up of Singapura impressed me much with the many minds and cultures that helped shape such a powerhouse of diversity and flavour.  I had covered a lot of ground during that mornings pursuit, keeping things simple the super convenient street signs and GPS capabilities I was navigating my way around Singapore's Downtown Core without any issues. After the intermittent showers, the sky turned a beautiful blue shade that was very much appreciated! Singapore, I'm not religious but Madonna's tune came back into my head! Jesus! 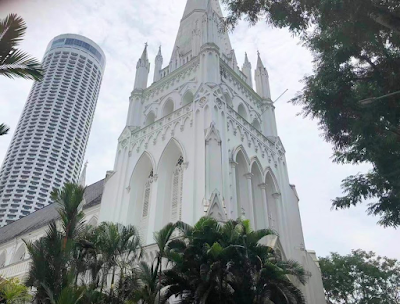 Set amongst the bustling Downtown Core, the land that St. Andrew's Cathedral stands on was always instead to house a house of worship. Set aside as part of Raffles's Town Plan of 1822, an Anglican Cathedral was first constructed in 1835 to conduct its fist service two years later in 1837. I'm not religious but the legacy and story behind St. Andrew's stood in that moment as the lasting legacy during the time of Sinagpore's time as a British Colony. I am no saint but I always respect photography within churches, temples and mosques unless rules permit photos. Frankly, I not surprised at all to see a certain group of East Asian tourists blatantly disregarding that rule as I peered inside the entrance of Singapore's own Anglican Cathedral. Knowing I was being respectful I had a good look into the service that was taking place in that moment, respect is due in such places regardless of religious beliefs. They wonder why their countrymen and women have such a bad rap for their lack of manners? Cleary not! So, was something from Coventry?

The first cathedral constructed wasn't going to last forever, St. Andrew's eventually was rebuilt with a gothic style in mind. The reconstruction was powered by the labour of Indian convict labourers under the laws of Singapore's British imperial rule. That wasn't cool but it happened and we can't take those movements back. Here's where the Coventry connection comes into play, the 'Coventry Cross' that supports the pulpit was crafted from the three silver-plated iron nails from the ruins of the 14th Coventry Cathedral that was destroyed during World War II. During my visit to Singapore I was amazed to see houses of worship from four different faiths, ranging from Little India's Sri Veeramakaliamman Temple to Kampong Glam's own Masjid Sultan. Singapore's Anglican connection made my East Asian location feel as it did when I saw HK's St. John's Cathedral, another Victorian era place of worship. Singapore's religious diversity impressed me much, I'm not religious but all the same the variety was impressive to see. It was! 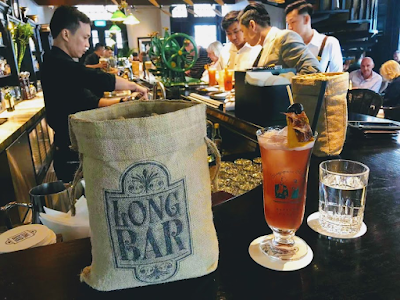 My accommodation choice whilst I was staying was basic but worked for me perfectly. On the higher price range, some of the lucky few prefer to stay at Singapore's world famous Raffles Hotel. Connected to the hotel I wanted to have a drink or two at the world famous 'Long Bar'. Famed for being the founding bar that created the Singapore Sling, a cocktail that I had to try for myself! Waiting in the queue, it didn't take a fool to see why Singapore's 'Long Bar' was causing such a damn commotion. Set within Singapore's famous Raffles Hotel it was the closest I was going to get to that premium world renowned hotel. I took my seat at the bar within Singapore's own 'Long Bar' to order the original sling to try all for myself! Upon first tasting my first Sling, I loved the gin and cherry combination! Taking all of the views and busy pace of service in, I marvelled at the operation the barman executed to make those signature cocktails! Tasty those drinks were, the price didn't bother me because it was about the culture! A delicious decision!

Enjoying the monkey nuts I wasn't going to be one of those people who brushed all of the shells onto the floor, that's just not my style. The first drink turned into the second and with the gin hitting me a little bit I opted for a third and final Singapore Sling because when it comes to tasty drinks I don't have any self control! The service charge almost got me, thankfully I had enough money to spare for that third and final mixed Singaporean drink! My experience at Singapore's 'Long Bar' was brilliant, if not pricey I loved every sip of the world famous Singapore Sling within the very venue that it was founded. Backtracking a little bit before finding the 'Long Bar' at the Raffles Hotel, I had found Singapore's own Marks & Spencer's food market! A slice of England had me wanting more of those pig like treats! Getting myself a bag of Percy Pigs had to be done! The Singapore Sling wouldn't exist without the flowing movements of the Singapore River! What a helpful Asian waterway! Of course my morning of adventure was well worth it!