Little India and Kampong Glam were in my sights during my second Singaporean day of adventure and exploration! During my pursuit that day I was able to find my first hawker centre, experience Indian culture once again and see a majestic mosque! With a pitstop interchange in Bugis, I found Ribena and British cheese in an unassuming supermarket! Such an epic infusion! 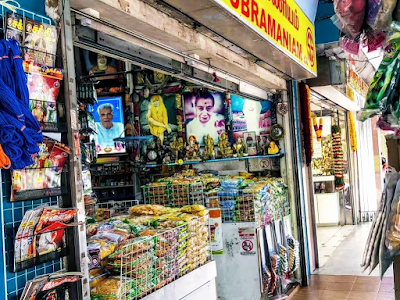 Singapore's MTR system took me from Chinatown to Little India without any stresses. My hostel bite-size breakfast didn't keep my morning hunger pangs away for long, hitting up Little India's Tekka Centre had to be done! Following the immaculately placed signs I let my sense of smell guide me to the gorgeous food that was on offer. Choosing a curry plate set meal, I feasted upon a spicy yet flavoursome chicken curry that was served with rice, chapati with some okra on the side. If truth be told it was quite spicy for my palette but I enjoyed it all the same. The immense feeling of Little India's Tekka Centre had me feeling like I was in a vortex of culture and life. Choosing a masala chai as my decided drink was the perfect way to calm those spices, adding to my meal. It was such an amazing yet simple food experience! People were so utterly friendly, their manners were impeccable and they didn't need to be prompted. Feeling far removed from my usual geographical location. Choosing Singapore was the right choice to make! Definitely, S!

Leaving Little India's Tekka Centre I found myself walking along Serangoon Road, the blue skies worked perfectly with the brightly coloured shopfronts that lined that busy street. I could hear Indian music and smell the familiar spices and incense just like I did when I was in India during December 2018. I was half expecting to visit Little India's own Sri Veeramakaliamman Temple but it was closed during that part of the day, it was a nice view from the outside of the temple, nevertheless. I stopped dead in my tracks, I saw the shop that has been featured above, the style of the shop reminded me of an ordinary Indian convenience store back from my time in New Delhi. I managed to get a good look before taking some sneaky photos. Little India's authentic nature didn't end there, I found some delicious Indian sweets in a shopping arcade that looked perfectly colonial in a British sense. Sure, Little India's vibrancy along with the food had bolstered my loved for diverse neighbourhoods. Little India set the tone for my morning! It did! 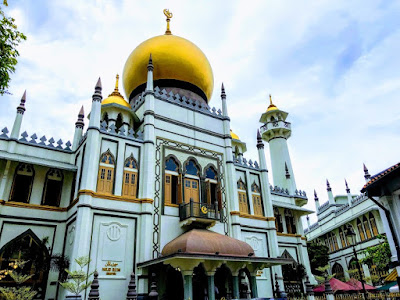 Making a quick change at Bugis Junction along the MTR network in Singapore, I had the pleasure of being reminded that I stood a few good thousand miles away from Mother England! Allow me to elaborate, feeling like I needed my thirst quenched I caught a supermarket that come into my view as I walked towards the exit at Bugis Junction. Fridges filled with imported European goods, I saw actual mature British cheese! It's the simple things! Oh, that thirst, not wanting anything fizzy I amazingly found Ribena! Call me crazy but I'd have to do some pretty drastic things in China to get Ribena in that bottled drink form! Getting myself together, I found the road to Kampong Glam within a few moments but being in Singapore those humid showers poured on down without any warning. My interchange through Bugis Junction was short but it was most definitely very sweet! I was beginning to feel at home in Singapore, the influences from Britain had me feeling comfortable with in that Asian location. I wanted to find Kampong Glam!

Another strand of Singapore's rich cultural make up smacked me in the face visually, that was in the form of Kampong Glam. Serving its own Arabian charm and then some, I found Muscat Street as the golden domed opulence of Kampong Glam's Masjid Sultan came into view. Not feeling like looking inside I marvelled from the outside, the rich detail of that house of worship impressed me much! Dodging the tourists took some going, almost losing my last nerve I managed to capture Singapore's statement Kampong Glam mosque without going off! Food was the centre of my day, done with the mosque I found some equally Arabic scran! Watching the tourists float past and the nearby English teachers who were working in China talk their talk made me laugh! My Turkish meal nearly took every last dollar for that day but it was worth it for the rich flavours! It was feeling very touristy but the Arabian charm that Kampong Glam possessed left me wanting much more! Serve it up, Singapore! Oh, 'Kampong', keep it 'Glam!' 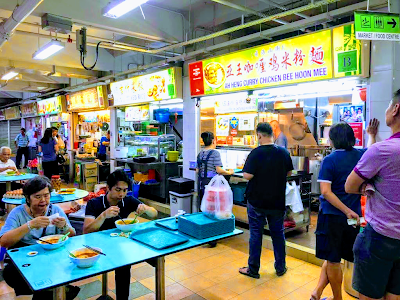 Getting my ass back to Chinatown was what I did, by the time I got back to the third ethnic neighbourhood of the day I was feeling hungry yet again! I made my way back to Chinatown's Hong Lim Hawker Complex, the first evening I had tried to eat there but it was closed due to a deep clean. Trying again, I needed a cheap eat because my splurge lunch was not cheap. As if by luck the hawker stalls were open at Hong Lim. Ordering some duck rice was for me, I hopped over to the opposite stall to get a cup of fresh and cold soya milk drink. I was not playing, I had researched Hong Lim before I flew to Singapore. Seeing it closed the other night was not a good sign but I made sure I got my slice of that Chinatown hawker centre. The second hawker centre of the day wasn't busy, that mean't that I was able to pick and choose where I wanted to sit. The high rise exterior of Hong Lim reminded me of a Hong Kong government housing block, an unexpected memory that was relived in real life motion. Did I go back to Shogun? SG, yes I did!

Without question, Singapore's many hawker centres had definitely not seen the last of me! No! Food was not in short supply across those two days, during both experiences at the hawker centres in Little India and then in Chinatown. The vibrancy of Little India had me instantly transported back to India! Those Indian moments impressed me much, sure the sights and incense were on-point! Bugis Junction gave me a slice of Mother England, even in Singapore I found Ribena outside of the United Kingdom! Yes, I saw a 'Poundland' style Singaporean Dollar store! Kampong Glam kept it chic, serving Arabian glamour with its own opulent mosque! Combining the three neighbourhoods including Bugis, the time in Singapore had me questioning my actual geographical location! The historical facts, cultural gems and religious servings kept me on my toes! Singapore had me speechless yet again, leaving me wanting more for all the right reasons I called it a day after my experiences during 2019s Chinese National Day holiday. Done!