Getting up before a reasonable hour to see Singapore's famous Merlion within its legendary Marina Bay. Feeling delicate, memories of Dorothy's and Backstage were hazy but that Malay barman was hotter than hell! Those tourists had me paying no mind to their noise, those views! Watching Singapore work it out and then some, the category was Marina Bay! Get it Singapore! 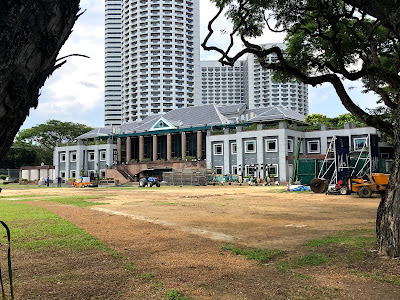 Embracing my last full day in Singapore, I headed out of my Chinatown comfort zone to explore more of Singapore's Downtown Core. Having consumed a few drinks at Dorothy's and May Wong's the previous night I took my time but surprisingly I was quite together. Trusting the city state's flawless MRT system left me fronting the city's Padang, maybe a reminder of the colonial introductions of cricket to Singapore? Going back to 1819, Sir Stamford Thomas Raffles instructed William Farquhar that his residence should be built upon what stands as the Padang in modern day Singapore. Duly noting, Farquhar was the first official declared governor of British ruled Singapore. Under different names such as 'The Plain' and also 'The Cantonment Plain', Singapore's Padang ultimately didn't have the destiny to become Raffles' first residence in Singapore. I had been to the Downtown Core the previous day, so I had met with the Old Supreme Court that overlooked the Padang. Cricket in Singapore? SG, I actually I had no idea!
At first glance, I already knew that the Padang had some sporting function with the flat green lawns, the clubhouse like building also gave me that sense of cohesion. During 1837, some years after Raffles had instructed Farquhar to build that homely structure, the Singapore Cricket Club was founded. The building that stood before me was actually known as the 'Clubhouse', I had gotten something right! Much research has been taken after that Connaught Drive sighting. Flashing back to the colonial days, I could just imagine the high society enjoying their G&T's on the deck during those match-day events. Even though the lawns were being modified, I still had a curiosity about the former use of the Padang that is located along Connaught Drive. Home to other forms of sporting events, I only really thought about cricket when I saw the green at the Padang as it oozed that sense of colonialism. At the Padang I was reminded that other former British colonies like Australia, Sri Lanka, Pakistan and India all still play cricket to this day! OK? 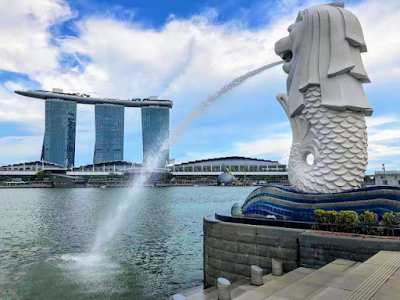 Anyhow, I hadn't got tickets to a show that day but I wanted to at least pass through the Esplanade theatre complex to kick start my Marina Bay experience. Walking over the 'Queen Elizabeth Walk' afforded me my first glimpses of the ocean wide opulence of Singapore's Marina Bay! It was true that I wasn't going to a show at the Esplanade, even still the whole concept of the "Esplanade' gave me that 'colonial connection' due to me knowing that many places in the former British Empire shared this landmark with places within England. I'm sure that Southend in England has its own 'Esplanade?' Maybe, so? The Living for the views of Marina Bay Sands, that hotel residence required the coins but I was having an equally exquisite experience during that Marina Bay moment! As I grew nearer to SG's iconic Merlion the tourists mounted, the selfie sticks tripled but my chilled state of mind stayed present, that hysteria wasn't going to get me heated! Absolutely not, I was going to be in control and take those legendary snaps! C'mon!
Snatching the moment, I successfully captured Singapore's Merlion water feature symbol! Taking every single view of Marina Bay in was quite a challenge, getting it together I accomplished that task with ease. The modernity impressed me much, Singapore's own Merlion propelled a constant water fountain motion back into the waters of the Singapore River. Content with my snap, I had a good chuckle to myself for all of the comedy shots that were occurring around me! I didn't have time to look like I was drinking a fountain of water, I had consumed enough beverages the previous night! Yes, I mentioned that already! Amused by those tourists from a familiar Far Eastern country, I paid attention to their commitment to their holiday conceptual photos! How I had life from that scene! Keeping it authentic I felt truly blessed to be in that moment, the work to pay for that Singapore Airlines flight had taken some working! Loving the view not the photography skills of those crazy tourists! Merlion, let's get sickening S! 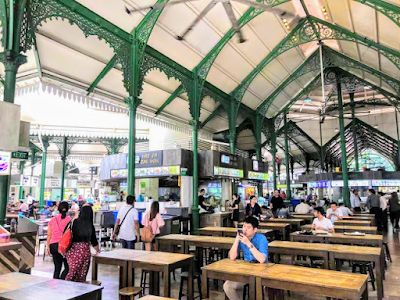 I was quite hungry, the Singaporean humidity didn't impress my semi-hungover self, I needed some Hor Fun and an Iced Milo! After following the marina's path towards the 'Gardens by the Bay' I found Lau Pa Sat! Fabricated in Glasgow, Scotland during the early 1800s as Singapore's early Imperial British era boomed. Lau Pa Sat acted as a Victorian style fish market during the Empire year's. Marvelling at the iron clad structure of Lau Pa Sat, it was mental to be within a modern CBD with towering glass and steel structures that made that Singaporean hawker centre look like the 'Black Country Museum' Peaky Blinders set as if it was set within the shadows of London's Canary Wharf Business District! Taking my seat, I opted for the duck Hor Fun rice dish, to drink I needed two ice cold Milo O's to quench my thirst! The food and drink that was consumed definitely hit the spot without any reservations! Being early I missed the office types, it was chilled! Milo O! The Hor Fun was worth the wait, Singapore satisfied my tastebuds! Yes!

One thing that staggered me about Singapore, I quickly found myself in an accomplished state because that city state was only pint-sized! That morning had been very productive, catching a glimpse of the Padang allowed me to see the lawns being relaid. The transport system stepped up once again, I only had my GPS, getting to the smooth edges of the Esplanade's theatre complex felt correct. The world city vibe had me living, Marina Bay set the cat amongst the pigeons for sure! Getting on the right path I found the right food and quiet settings within Downtown's Lau Pa Sat hawker centre. My final day in Singapore flowed well, even though the hangover had me a little I was on the level to find the right food and cold non-alcoholic drink! By the time I got to Lau Pa Sat the tourists had disappeared, the local flavour of my meal had me in a completely different zone. The morning saw me bring the productivity but after seeing Marina Bay's Merlion and Lau Pa Sat, I needed a rest! A part of me didn't want it to be the final day, lah! 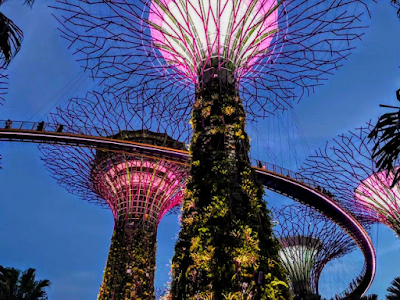 I used my Singapore MRT card for the final time, heading out of my capsule hotel before dusk to find Singapore's Gardens by the Bay. Being completely free to access, I was looking forward to seeing a spectacular sight for free! With flawless signage I made my way to the main gardens, the feeling was like I was in a scene from Disney's Avatar! I loved every second of that amazing dusk experience within Singapore's Gardens by the Bay. Taking my time to take the best photo, I loved seeing the people from above walk around the elevated walkway. The majestic and mystical feeling of the gardens gave me so much life, leaving me with such wonderful memories of my time spent in Singapore. As the crowds grew larger I knew that it was perfect timing to vacate the area, I wasn't about a crush during that lovely lit location. That was a choice made wisely! Content with my Gardens by the Bay experience it was also right the decision to behave because I had played some tricks. C-town was the plan for tasty satay skewers and some cider!

Leaving the Downtown Core behind me, I headed back to Chinatown for the final time for some chicken and beef skewers before going to bed. I had such a lovely day, the whole Marina Bay Area had impressed me a lot. I was content with my photos and had experienced such lovely pre-night time views at the Gardens by the Bay, I felt blessed to be in Singapore. Chinatown kept me on the right path during the final night, the skewers and one Bulmers Cider left me feeling fulfilled. Bypassing any distractions I retreated back to my hostel, leaving the day behind I took days moments to my dreams that night. I knew that my early flight required me to be sensible, I needed to keep that long haul flight safeguarded. That final day had be in all the right places at the right time, I had taken my time appropriately to see the three points of the day within a chilled space of time. Indeed Singapore's Downtown had showcased some serious references that the category has to be Marina Bay! It had been such a blessed day and end to my trip! Bye!