My final day in Turpan served to me four immensely interesting elements before my high speed train back to Urumqi. Beginning with a breakfast that was promised to be very local, I kept an open mind, very open! The ruins of Turpan's Jiaohe Ancient City put the cat amongst the pigeons for sure, it was vast! Thankfully, we found coffee from KFC, that caffeine fix was sorted! 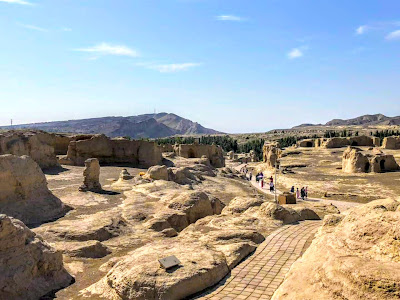 After meeting with my guide and the driver, we made it over to a local restaurant for a spot of breakfast. I had never seen so much meat on offer for breakfast! I couldn't see any breakfast sausage or bacon, it was all about lamb dumplings and even chops. It was said that the local Turpan people prefer a breakfast that is high in protein. As you do, I had some lamb dumplings and some soya milk. For that experience alone I gave that uniquely Turpan breakfast one chance. Fuelled by that bizarre start, making our way to the ruins of Turpan's Jiaohe Ancient City, the scenery gave me a deeper sense as to how rugged and stripped back Turpan's former settlement. I wasn't all that bothered with the history that was behind that first port of call, the views overlooking the former city posed to be more than enough for me. Walking to the top in the summer sunshine was something else, being early on in the day it already getting very hot! The heat was getting to me, I needed some water! All that meat had given me the right energy!

Going back a few steps to the buggy ride to the foot of the ancient city, most of the domestic tourists got out at a building that looked authentic but according to my tour guide it wasn't an original feature. If truth be told I managed to get some amazing photos from the top of the city's peak, the decaying stone remains the making up of the former Jiaohe Ancient City, blending in with the rocked and mountainous backdrop. When I looked closer into the distance I noticed a small area of lush green trees and vegetation within the baron and dry land that occupied the former ancient city. I would find out in less than three hours as to why Turpan held pockets of lush vegetation within its harsh, hot desert terrain. The vast expanse of the Jiaohe Ancient City impressed me much, the whole experience had been utterly swelteringly hot to handle but worth it in the end. Enduring the heat I need some caffeine to keep me going, I was struggling! How I didn't know the coffee was on the way! The newly opened KFC had me refuelled after that fix. 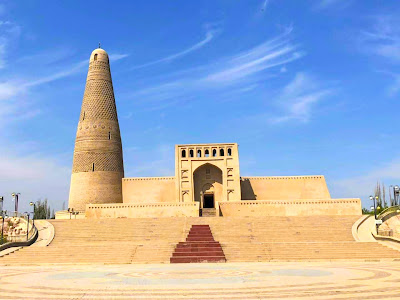 No grape attraction for me, the authentic roadside scene the previous day had impressed me enough. Arriving at Turpan's Suleiman Minaret gave me views of a place that I had really wanted to see during my Xinjiang trip! The planning had been brought to life! I adored the fact that such an islamic sight stood within China's Mainland due to the high presence of Buddhist, Confucius and Taoist temples. I don't follow a religion but I'm all for religious diversity! No ifs or buts! The sky was so blue, the sweeping clouds blessed me with a clear and pristine viewpoint. Getting to the top of the steps allowed me to see the minaret from an up close and personal point, entry wasn't permitted inside the minaret but each brick looked like it had been painstakingly laid into place by hand. Baking in the sun, in one way the chimney-like shape of the minaret reminded me of a pottery chimney! A pottery chimney from the city of Stoke-on-Trent, England. Ey duckie! No, the Suleimen Minaret wasn't in Stoke, it was very much located in China's Xinjiang region.

Going inside the adjoining mosque had me embracing a higher love! I'm not religious but for the spiritual feelings that I felt I couldn't connect them to any of the previous feelings felt within any other Mainland place of worship other than those within China's Tibet Autonomous Region. The interior of the mosque showcased a harsh yet smooth stone surface, a small prayer room allowed me to see its heavenly sky light that supposedly had a direct link to the prophet. Did it though? Leaving any prejudices at the door, the visit to Suleiman's adjoining mosque chilled me in one respect because it wasn't a working mosque. Not asking any more provocative questions, well I did ask some more because my guide was more accepting compared to my Kashgar counterpart. My experience at the minaret had made up for not visiting the grape attraction, the roadside vineyard/grapevine scene allowed me to save some time for Suleiman's site. Turpan had been amazing, it had completely caught me off guard with those unstoppable XJ sights! Karez, who? 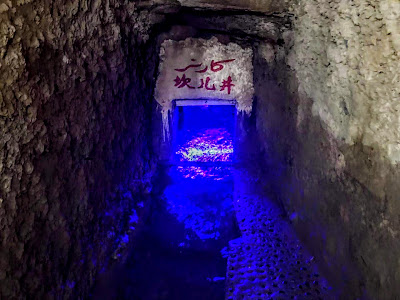 Confused by its exterior, the final site that I saw before I returned to Urumqi that day would have a water theme. Literally, I had no clue! The clues to this concluding place had been quite evident during my two days in Turpan. Being such a dry and hot place with hardly any lush pastures I had seen patches of land that were as green like oasis's, I was about to learn more about the science behind Turpan's clever Karez Irrigration System. 'Karez' meaning 'well' in the Turkic Uyghur language explained how the ancient underground structures acted as well to channel water beneath Turpan's scorching dry deserts and mountainous geography. Going further underground the whole place was a bit bizarre. Reaching what felt like the bottom of the Karez Irrigation System, I was able to see an opening to the water system. Adhering to the strict rules I was able to fill an empty bottle of water with the fresh Karez water. Yes, I saw a female guide who looked European, she was actually Chinese! Yes, China's Xinjiang region amazed me!

The whole 48 hour experience spent in Turpan felt so authentic, the guide and driver were both great and everything was on time and as planned. With a few surprises thrown in for good measure, I loved it! The 'Karez' water system attraction impressed me, keeping away from those garish souvenirs I gladly accepted a lift back to the train station before my Urumqi bound high speed service. My Xinjiang trip was coming to an end, I wasn't feeling bitter about that trip ending because it had been unique and also challenging. Even those passport checks seemed to make the trip seem worth it, really? It was something else compared to any other region visited within China before. Waiting for what felt like an eternity at Urumqi's well guarded train station, I managed to get to my hotel without any hitches. My restful night was fine with my takeaway meal delivered successfully. Urumqi, Kashgar and Turpan gave me the opportunity to see several sides of China's Xinjiang Uyghur Autonomous Region. I will keep a piece of Turpan with me!