With my first day in Urumqi so full packed, I had to leave one element out of the first post! Braving a freak rain and thunderstorm I tried my best to discover more during the first night. After returning from Kashgar, the two days that I spent in the city fared to be mental for a reason that was out of my control. Out of the crazy, I had an amazing time! Oh, those Samsas! 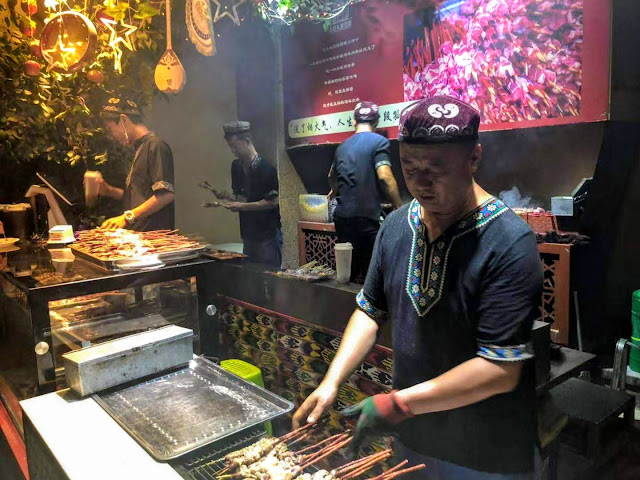 My first day spent in Urumqi was the gift that just kept giving, I had achieved all I had set out to during that first afternoon, I treated myself to a well earned rest. Fresh from my short breather I bounced back, I found out that following Beijing Standard Time wasn't the done thing whilst in Xinjiang! Using those extra two hours ahead of time I made my way down to Urumqi's Erdaoqiao International Food Street. I would be taking night train down to Kashgar the next day, maximising that evening in Urumqi had to be done! Out of nowhere the majestic orange skies presented Urumqi with a gargantuan thunderstorm, it was spectacular to witness but not so without shelter! Arriving at the food street after the rain had eased gave me views that I wasn't expecting to see. It only took a few moments before the stalls to resumed their business after the downpour! Within ten minutes, orders were flying out of the stands as the mix of locals and tourists enjoyed the local Xinjiang foods. Urumqi knew that I wanted some lamb kebabs!

The recovery from the rain was quick, the volunteers all scurried around with bin-bags, clearing the rubbish from the tables at lightning speed! By chance I found somewhere to sit, the rain dared to start once again but it was only a small shower. Feeling thirsty after my long day, I wanted to try some of the local beer. I saw a draft beer stall, with that discovery it was a done deal! The whole street looked very new but it was just what I was expecting to see, I loved hearing the different Chinese and Uyghur languages as people enjoyed their evening. I was happily amongst a contrast in cultures once again. Throughout my first day in Urumqi, it had been manic but I was able to relax with my beer and delicious food within that Xinjiang style food street! Did I want to try any Kashi Water Ice Cream? No, I would be on the night train the next day to that place, I wanted everything to be as authentic as possible. Content with the days offerings I started the walk back to my hotel with the knowledge that I would be perfectly safe. 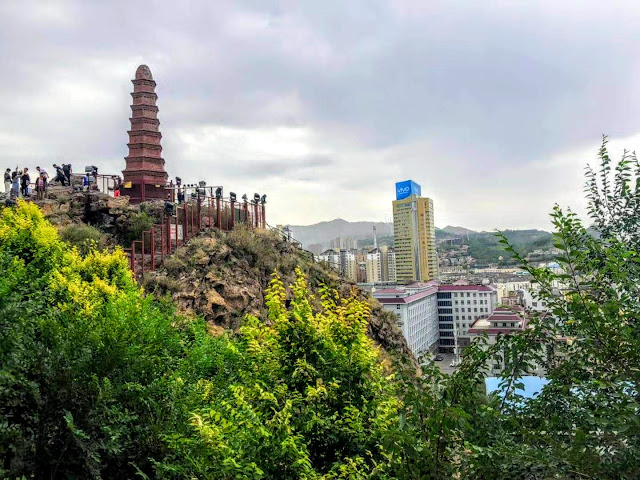 Rising bright and early the following day I put my best foot forward, finding myself at Urumqi's own Hongshan Park to find the famous red pagoda. I didn't know anything about that park but I was willing to walk up the steep hill to find the red pagoda. Leaving my hotel early doors, I flagged a taxi bound for Hongshan Park, the constant use of Didi taxis in Beijing had me feeling as if I was back in Wuhan, I just don't flag taxis in the capital! The security check was relaxed and the parks entrance stood still, that impressed me much because I loathe crowds. As I neared the top of the peak, a lovely vista of a growing city fronted me with a series of striking mountains as Urumqi's backdrop! Catching the first glimpses of the pagoda gave me another lovely view of the city and its mountainous backdrop, would I be climbing those steps to the top? No chance, URC! Admiring the view from a space where I felt comfortable was the ticket! The views from the midpoint vantage point gave city with a serious mountain range in view, I loved that park!

With my imminent departure to Kashgar that afternoon, I kept up the pace after I had caught a glimpse of Urumqi's Red Hill and Zheng Long Ta. Walking back to my hotel was just the thing, the city was waking up because it followed its own local time zone rather than Beijing Standard Time. Finding a great place for lunch was a winner, chowing down on some lovely local Uyghur food satisfied those cravings during my Xinjiang holiday. Checked out of my hotel, it was time to head for Urumqi's Railway Station for my overnight train to Kashgar, I wasn't ready for that train station! Getting my passport and tickets ready for another check, the train station security staff were baffled by my Chinese visa and British passport, thankfully I had some Chinese language skills to explain my legitimacy in China. That train station was huge and extremely well guarded! I had a lot of time to kill but that gave me the perfect opportunity people watch, soaking in that new culture and language once again it was still amazing to be in China! Yesss! 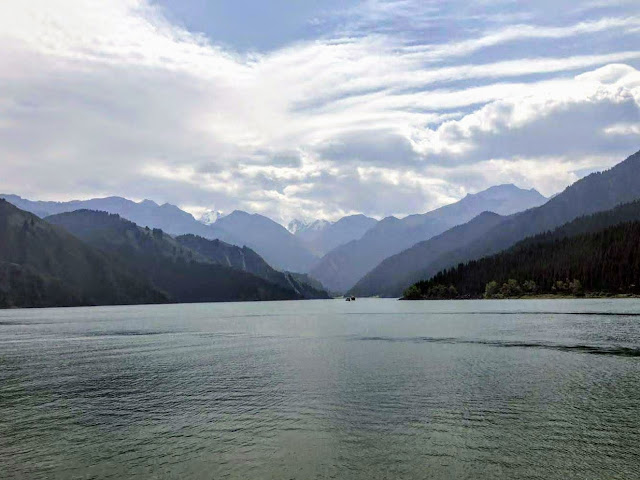 Touching down from Kashgar allowed me to spend two days in Urumqi before my Turpan sector. I had booked a seriously cheap hotel that gave me some serious drama, more about that in a few moments. Leaving for Urumqi's Heavenly Lake brought up no issues, having a little sleep in the car was necessary. Getting past the security check I was narked by the procedures but the whole rigmarole to reach the banks of the Heavenly Lake fared to be well worth the ish! Thankfully, the weather held out, although some cloud presented themselves but it was cool enough for it not to have felt cold. I gazed into the distance, finding  my own secret gateway to that Xinjiang paradise. The water lay still, the mountains shimmered with a green sheen, I was not bothered by the selfie sticks and the tour groups because the magnificent lake put me in a heavenly state of mind. I appreciated the view with much gratitude, sitting amongst the greenery whilst the hoards of tourists acted questionably. I felt so blessed in that moment, well and truly.

Paying for a private car and driver to take me from my hotel to the lake had to be done, I wasn't messing with any tourist buses. Being Xinjiang, the heightened security checks posed more of a headache for me as an independent foreign traveller in a region of China that hasn't truly opened itself up to foreign tourism. The fee for the car was well spent considering the nature of the place. Thanks to China's easy functioning apps and a good travel expert friend, it was all good! Rules and passports aside the landscape that surrounded the Heavenly Lake transported me to another world, the lush green pastures and mountainous scenery fooled me as if I was in Turkey. When all was said and done, the mornings visit to Urumqi's most beautiful landmark left me feeling very accomplished indeed! I wasn't going to miss those tourists but I would be missing those gorgeous Tianshan Mountains for sure! Acting like a boss I got myself a new hotel room, I was savvy enough to avert that mishap! Trip.com needed to come correct, it wasn't my wrong! 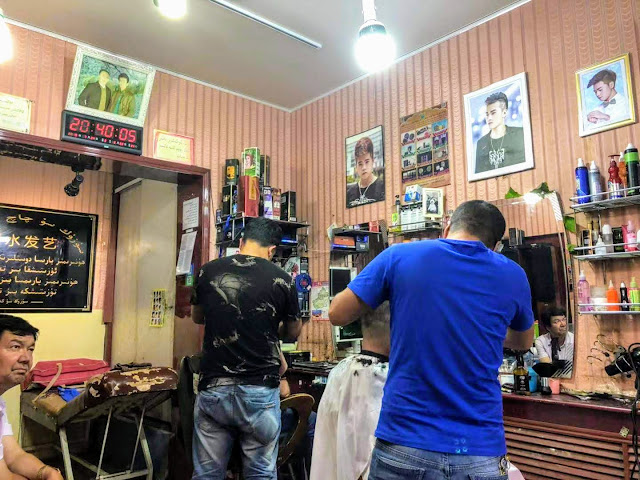 Fed up with having no running water and the general dankness of that awful budget hotel I snatched a full refund. I consulted my go-to hotel booking app, then I managed to book another room and get myself into a taxi within no time. Arriving at my new hotel I was faced with some serious discrimination, something wasn't right because people were checking in and rooms were available! Calling my hotel booking company up, I stated they had a duty of care since I had a confirmed room within their booking system. I knew the situation before the hotel manager could spin any more fabricated chat, within five minutes the company had found me a nearby hotel that accepted foreigners, closed mouths don't get fed! The final hotel choice of that day was ten times better than my original abode, running water was found so I could relax! I wasn't going to let my drama impact on the evening time exploration in URC! Yet again my Chinese language skills came into play, whilst in Xinjiang I needed them badly! What a day! An adventure! Yes!

Feeling refreshed and blessed, I made it back to the city's Tianshan District for some Samsas  and a haircut. I was in desperate need of some food! Embracing the buzzing Uyghur centre within Urumqi's Heping Road once again gave me life. Children were playing out in the street and the aromas from the street-side restaurants could be smelt in the air. I devoured some tasty Samsas, they were like dumpling type fried lamb pasties and they tasted utterly gorgeous! Finding a Uyghur barbershop across the road allowed me to get my fresh cut for a bargain price, unlike in Beijing! That day had been absolutely bonkers, from the idyllic scenery of the Heavenly Lake to then being rejected from my rebooked hotel, but things all ended well! Feeling content with my cut I revisited the food street for a less rainy view, grabbing a drink or two it was time for bed. Urumqi had served two unique days, acting as the bookend between my time spent in Kashgar. Refreshed from my a good sleep, I left Urumqi for Turpan by high speed train. 再见了!