The final stop during my Xinjiang summer trip was the city of Turpan, a grape famous city located two hours from Urumqi on China's convenient high-speed rail. I wasn't ready for the ruins or the grapevines because everything was so raw and unspoiled! Saving the best for last, maybe? It was nice to not have any disruption with hotels! My day in Turpan was major! Sure! 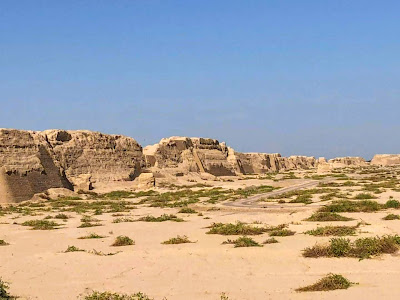 Done with the my previous Urumqi hotel fiasco, I made my way back to Urumqi's extra secure railway station for the considerably shorter journey to Turpan. I was thankfully not taking anymore night trains during that trip after travelling to all the way to Kashgar from Urumqi! The landscape changed as soon as we had left Urumqi's City limits, my high speed train hurtled down the line for Turpan North Railway Station. The passport check at the exit of Turpan's railway station was intense, once again my Chinese language skills came in very handy indeed! I was feeling a little apprehensive as my taxi made its way closer to my then booked hotel, the right to host foreigners in hotels within Xinjiang was proving to be a recurring monopoly! With a stroke of luck I was able to check into my hotel and pay for the room without any issues. That evening I found a restaurant that served me some delicious local food, the pilaf was gorgeous and the lamb kebabs tasted amazing! My evening was leisurely, thankfully I was able to relax.

The next morning I was picked up by the driver and greeted my the tour guide, Benny. Leaving the small city centre allowed us to find the Astana Caves, a small plot of land that housed several well maintained caves. Moving onto the first major sight of the day brought to the Ancient City of Gaochang, that was a place that looked interested from the off. Practically having free rein of the deserts ruins, the ancient city impressed me much with its expanse of rugged sand coloured remains that gave me a real sense of how the city could have looked like back during those ancient days. The heat was beating down but it wasn't humid, the dry heat was fine to deal with in Turpan. Initially built during the First Century within the harsh Gobi Desert, I later learned that Gaochang was used as a Garrison town. In the moment I wasn't paying attention to those details because the rugged views were too good to miss! Turpan had me at ease, being Xinjiang the security checks were expected. I was truly amazed! Turpan showcased its rugged edge! Yes! 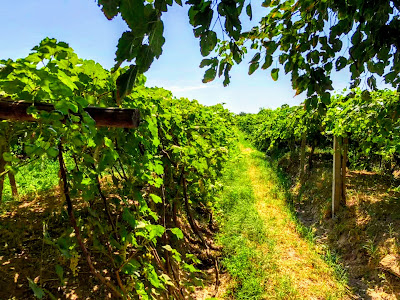 Driving away from the ancient ruins allowed me to see Turpan's true claim to fame, stopping alongside the road where some local people were boxing some grapes for export told me everything that I needed to know. Looking like the rolling hills within the French countryside, that corner of Turpan had an abundance of vineyards. Known for its irrigation secrets, the otherwise dry and flamingly hot and dry soil doesn't show much life aside from those key cultivated pieces of land, crafted into money making grapevines that help Turpan's local people make a healthy living. I had a look on Taobao to find many sellers that shipped grapes from the region across China's Mainland. It was amazing to see the lushness of the grapes and the rich green shades that reflected in the sun during that super hot July afternoon. It wasn't Bordeaux but Turpan had an honesty with its grape, raisin and wine trade. Yes, I was pleasantly surprised to see such a sight! We didn't need to waste time the next day at a grape tourist attraction! No!

As lunch time approached I was hungry for yet more lamb kebabs! Yes, the lunch that I had was lovely because it was in a local establishment that wasn't flashy at all! The bread was soft and hot, whereas the grapes that had picked from the nearby vines tasted so sweet and fresh and those kebabs were amazing! I adored the area that surrounded that lunch hangout, people had bed frames outside because the dry heat meant no mosquitoes bit the local people so they slept outside during the summer months. Kashgar had tourist qualities but Turpan had hidden gems that impressed me much, in one sense I felt like I was in Turkey once again! It was time for the afternoon's programme to begin, hitting the road once again had us stopping for a lengthy security check. Passports had to be checked once again, I stepped into a deserted township that felt bizarre, still yet orchestrated I didn't know how to feel about it. The heat in Turpan during the morning had been bearable but when the afternoon was a killer, I was unbelievably hot! Oh! 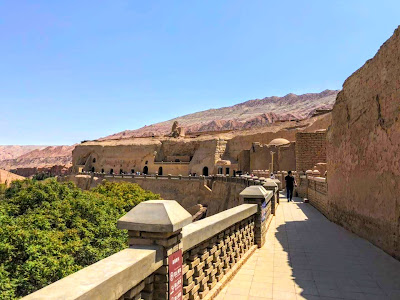 As my air-conditioned car made its way closer to  Turpan's Bezeklik Thousand Buddha Caves, we stopped to see the effects of the searing heat. Set in a mound of sand, the clever guy who was in charge had eggs cooking within the sand. Charging people for the pleasure to boil their own egg in the sand I passed that opportunity up. Catching a glimpse at a rather lush valley that didn't look like it belonged within such a harsh and heated setting, the irrigation of Turpan's land sure produced an oasis like view. I would fine out the following day, the secret to those lush desert pastures. Arriving at the Bezeklik Thousand Buddha Caves showcased four tourist coaches, that sight didn't impress me much but I had faith in my guide Benny to show me all the caves had without the hordes of domestic tourist making too much of a noisy presence. After climbing what felt like one thousand steps I was front with the view that I exactly wanted to see! Yes, the contrast between the greenery, mountains and caves worked perfectly! I felt like an explorer!

Snatching just enough time in between the loud domestic tour groups, the caves didn't deserve the speaker noise that the tour guide made. Even my Chinese friends have a problem accepting the local groups, they say their interpretation of manners doesn't set a good example. Blocking out the nuisance from my explorations around the caves it was fine, get it good and get in line because nobody has time impatience! It's not bitterness! The story behind the caves rich history impressed me much, the French explorer sure had a bad reputation but what intrepid soul has kept a souvenir from their travels? The religious mix allowed me to see some of the carvings scraped away, the Silk Road drip dropped new influences that didn't go down well with the local inhabitants of the time. As mentioned before the stark contrast between the harsh stone caves with the lush pastures below had me believing I was staring at a mirage. I really liked Turpan's Bezeklik Thousand Buddha Caves, I was taken on an adventure! Take it easy, please be mindful? 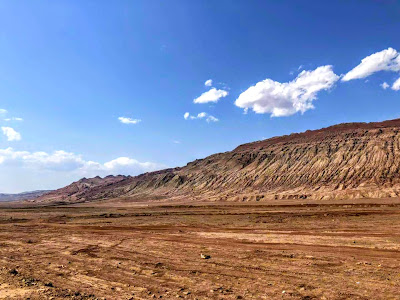 Concluding my first day in Turpan was a drive by the regions famous 'Flaming Mountain'. Complete with its own flame like detail, the deep red tones and dry setting allowed for a knock-out photo opportunity! At the beginning of the day I had the chance to see the scorching scenery of Turpan's flaming mountains, thankfully time permitted us with a short stop on the way back to my hotel in the later part of the afternoon. The majority of the domestic tourists had paid an entrance fee to take their photos in front of a tacky sign. The sign looked rather tacky but each to their own I said in that moment to myself. That was a choice I didn't have to make. The striking landscape was the icing on the cake, the day had been so hot and with such rich sights I lived for every moment! I was in totally awe-struck, the rugged terrain impressed me much! Leaving the flaming mountain scenery behind us, my car drove me back to my city hotel. Turpan turned the heat right up! If you haven't been to China, come one! What are you waiting for? 中国的美丽!

Those delicious lamb kebabs no longer satisfied my hunger, after I was dropped off at my hotel I came to the conclusion that I wanted takeout. Going across the road to a locally themed Uyghur restaurant allowed me to make an order for takeaway, going all out for my final night in Turpan I ordered the legal of lamb that had been baked within a rising flatbread. The restaurant was crazy business, all I wanted to do was to get my food then return to the hotel. Being famous for its grapes, I found a bottle of local Turpan red wine in an off-license downstairs from the restaurant. Returning to my hotel room I devoured the contents of my takeaway and finished the bottle of wine, not going to lie I wanted to drink another one! I chose to be sensible. The day had been long but very enjoyable, the sights and sounds of Turpan for the first day had given me so much! An early night was the ticket because after the itinerary the next day I would be making my way back to Urumqi. Xinjiang kept on showing me more and more! 我对中国有爱! 真的爱!