On The Borderline... Kashgar, China!

Travelling through the Taklamakan Desert from Urumqi to Kashgar on my night train was an experience to say the very least. That Xinjiang sleeper train provided me with rugged views of the harsh yet drop-dead gorgeous landscape! The ancient city of Kashgar had been one place in Xinjiang that I was especially excited to discover! I felt as if I was in a scene from Aladdin! Yes! 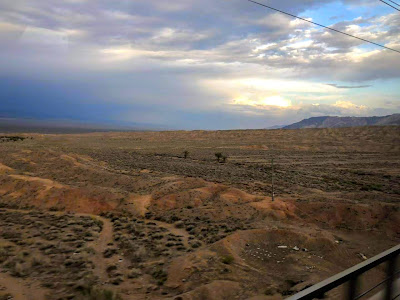 Boarding that seriously long Kashgar bound night train felt like a different experience compared with other night trains that I had previously taken in China. Albeit the extra line that we had to make before taking the escalators down to the platform, we had to wait in line before the train pulled into Urumqi Railway Station at our designated platform. Settled in and with the first two hours bossed, the landscape south of Turpan quickly changed from built up areas to a barren deserts mystery. As dusk turned the sky from day to night, it was mesmerising to see the changes across the landscape. As the train approached the heart of the vast Taklamakan Desert, the only reminder that I was in China was my phone signal! If truth be told, I felt like I was in the middle of an Arabian wilderness. I admired the changing views from my bottom bunk in the hard sleeper cabin on-board, whilst the people were so very friendly the views from my window were like no other I had ever seen before! Aladdin and Jasmine, come on through? Was I dreaming?

The vastness of Xinjiang really could be felt, the stations grew further apart from each other as the night grew closer. It was reassuring to see the occasional burst of lights when my train pulled into Korla before the cabin lights were properly switched off for us to sleep. I have to be honest I could sense some some strange goings on during the twilight hours on-board the train to Kashgar. Being choosy with my words, I won't go into detail because it could be seen as very sensitive. The dining options were very limited, I had my instant noodle pot and a healthy supply of local beer to get me through the journey. The extra can that I bought helped me get to sleep! Night turned into morning, the ancient city of Kashgar grew closer. The landscape maintained its rich red colour with a harsh mountainous texture, it was nothing like I had ever seen before that train journey. I was living! After more than seventeen hours since leaving Urumqi behind the previous day I was very relieved to finally reach Kashgar! The train journey was 17 hours! 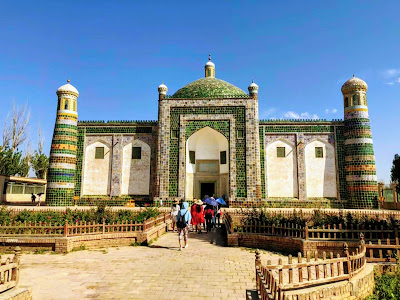 Fresh from Kashgar Railway Station, the first stop on the day's itinerary was a brief stop at the Abakh Khoja Tomb. The outside of the main tomb was beautifully decorated with jade green and pearl white tiles with a splash of other colours for good measure. Learning fast that the tomb was home to the family of Abakh Khoja, a prophet revered so highly by the Uyghur people he's second to Muhammad. Abakh Khoja was believed to have brought Islam to the former region of Kashgar, bringing the traditional Turkish text that became the foundation of the Uyghur regional language. I was very interested to knowing more about the Islamic side of the history, funnily another nugget of information made it to me. During the Qing Dynasty, the Emperor Qianlong requested a beautiful Uyghur princess should become one of his concubines. She would be lovingly named 'Xiang Fei' meaning 'Fragrant Concubine'. Oh K, Emperor Qianlong definitely proved his love for his official 'bit on the side!' X-Fei, I really want to be a concubine!

When Iparhan passed away in 1788, the emperor had a horse drawn vehicle bring his 'Fragrant Concubine' back to her hometown of Kashgar. Just to avoid any confusion, 'Iparhan' was Xiang Fei's name in the local Uyghur language. Leaving the mausoleum for the three mosques that still were standing gave me something worthwhile to witness. Juma Mosque stood out after the grandeur of the Abakh Khoja Tomb because the name meant 'Friday Mosque' in the Turkish language. Leaving the ancient stories behind in that protected area allowed me to watch a brief show about Emperor Qianlong's only Uyghur concubine. The sun was crazy hot and the sun-shades really were not doing anything for my viewing pleasure. Moving closer to the hotel I found out from my tour guide that Kashgar still attracts people from far and wide for the huge Sunday Market. It was the case that most of the shops only open on the seventh day for the Sunday Market. Amazingly, I had only been off the train for less than one hour, not bad at all K! 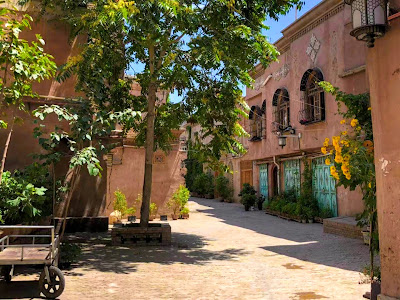 Freshened up and ready to explore, only then did I venture out from my nearby hotel to one side of Kashgar's Old City. Being mindful that the old buildings had received some serious restorations by China's Central People's Government I wanted to keep an open mind throughout my visit. Grabbing some chicken and rice from an unassuming local looking restaurant started my 'foodie' journey just right. I went further into the older part of Kashgar's Old City to find a tasty lamb treat that I hadn't noticed whilst I was in Urumqi first time round. Using my Turkish language skills to blend in with the Uyghur folk I ordered five freshly cooked Samsa, their taste transported me back to mother England. The Samsas reminded me of a certain high street pasty shop treat but much, much, much better! That local Xinjiang snack tantalised my tastebuds for the win, allowing me to further appreciate the beauty of the culture and local foods. After I had finished Samsas I explored some more! Sure, those local Kashgar Uyghur people were sound!

The feel of the Old City gave me a sense that I was exploring through a trove of uncovered treasures. As I walked through the alleys and saw the local Uyghur children play outside their front doors, the feel of the neighbourhood gave me a certain authentic feel. The relaxed nature of the Old City made me feel at ease, to roam around after such a long train journey felt amazing! The more lively streets contained more good food and a healthy serving of Kashi Water Ice Cream, something that I had saved for my time in Kashgar. There was a strong sense that tea drinking was a thing like it is in Turkey. It was nice to see something familiar taking place within my Chinese location once again. I felt content with my visit to that side of the Old City in Kashgar, so much so I returned the next morning to find some breakfast because the hotel served some crazy goings on! The local establishments served me some freshly baked bread, salted yoghurt and fresh camel's milk for my local Kashgar breakfast. Damn, it was so delicious! 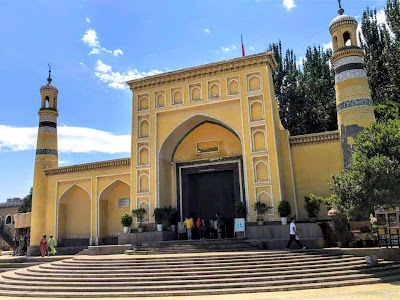 First constructed in 1442, Kashgar's Id Kah Mosque stands as the largest mosque in China! I had seen this mosque on documentaries and Chinese tourism campaigns about Xinjiang, so I was very curious to see what was standing behind the mosques grand entrance. Being conscious that different countries view religion differently, I wanted to ask as many provocative questions during my brief visit to Kashgar's Id Kah Mosque! The quiet walled gardens gave me a sense of chill, a calm feeling transcended within that sacred space. I asked about the prayer schedule, the mosque has a function for the main Friday prayer with a key focus for the service to be special compared with the usual visit to a persons neighbourhood mosque. I was really happy to hear that people that the right to exercise their beliefs, to pray and to listen to the Imam read from the Quran. No, I'm not religious but others should have the choice. Id Kah Mosque was a hotly anticipated place for me to discover, getting to see behind the wall gave me faith. K, let us pray!

Taking it easy for the rest of the day I returned to my hotel, being on the night train had disturbed my usual quality of sleep. I thought it would be wise to relax before going to the night market later on that evening. From my train passing through the mystery of Xinjiang's portion of the Taklamakan Desert, to learning about the involvement of Emperor Qianlong's Uyghur concubine it had been a fabulous portion of my trip. The fact prayer was still legitimately taking place within the Id Kah Mosque gave me a sense that normality for the religious few in Kashgar. Living in China has taught me to be careful with my words but I will forever be putting my foot in my mouth! Not good! The buzz and charm of the Old City impressed me much, allowing me to use some Turkic language skills to order some seriously tasty Samsa snack. I would resurface later on that day, the night market would be serving all kinds of delicious foods and I didn't want to miss on my only chance! Truly standing on the borderline, Kashgar served the goods to me!