One Kashgar blog post hasn't been enough, I bring to you the second of two Kashgar posts. With night markets and snacks galore, every tale needs to be told! My first day in Kashgar had been full packed with a visit to the Id Kah Mosque with a huge walk around one side of the Old City. China's Xinjiang region had me feeling alive, I am a culture vulture at heart! 喀什, let's all eat! 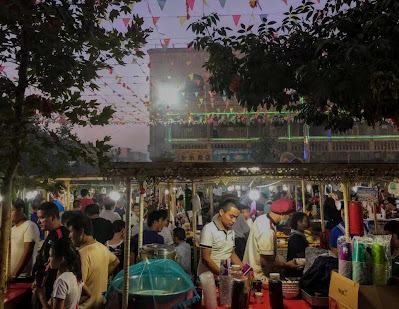 After seeing the Id Kah Mosque I decided to rest in my hotel for a little while, the overnight journey and day's sightseeing in Kashgar had tired me out. Fresh from my rest, I crossed the road from my hotel to the adjoining side of Kashgar's rejuvenated part of it's Old City before the sunset allowed me to see the hustle and bustle begin. The Old City had two sides to it, I wanted to see both sides of the story! I already knew what I wanted to eat, lamb kebabs and bread all the way but it was a great time to people watch and to take in the whole environment. It was intriguing to see some Han Chinese tourists look confused when they saw me, a Caucasian person! Am I an alien? Minding my own business, I found a doorstep to sit down on. Regardless, I enjoyed my food and appreciated that hectic cultural moment. The lights, smells and sights gave me life to no end! The feel of the night market left me questioning my Mainland China location once again! Yes, I was all in it for the views and my taste-buds loved every second of it!

My hotel stay in Kashgar included breakfast, finding the right floor just before the buffet opened was my plan. Executing things the right way up until a certain point, things were fine but I wasn't ready for the almighty stampede made by the domestic tourists! Not wanting to entertain their hasty nature towards that breakfast service I vacated that mess without a seconds thought! Things were only just opening due to the local observance of Beijing Standard Time, trusting the businesses within the nearby Old City served me a lovely breakfast that was quite unexpected. I had found some freshly baked bagels from the first bakery that I saw, then moving forwards a street side vendor selling camel milk because no coffee or tea was in sight at that point! To accompany my bagels I found some salted yoghurt that acted as the perfect treat to dip my bagels into. Looking back to the chaos of the hotel, I now feel so blessed to have had such a local breakfast in the Old City! Ditching the hotel, I sourced my breakfast from local Uyghur vendors. 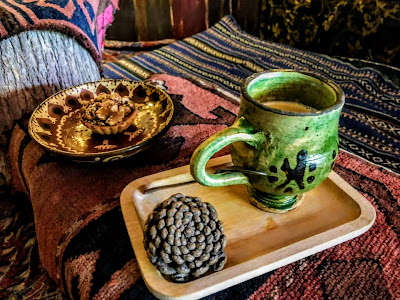 Meeting my tour guide allowed me to find more about the other part of the Old City that I had been to the previous night. Met by a hoard of tourists at the main entrance gate to that side of Kashgar's Old City didn't impress me because it wasn't what I wanted, crowds! Used to my summer holidays to Turkey, the sounds and dancing didn't sound and look out of the ordinary to me. I had a different perspective, that was my freedom to choose that feeling. Entering the Old City, I learnt that the outer stalls were famed for their terracotta crafts. The local merchants crafted their trade because they stuck to what they knew, smart they were to do that! Sidetracked, I bought a beautiful dress and some jewellery for my friends little girl. That purchase had to be made, the friendship meant a lot to me so I wanted to treat her daughter to some local Kashgar gifts. The mornings heat grew hotter, it was a glorious dry heat unlike Beijing's humidity! Kashgar, I was feeling the love that morning! Xinjiang knew what I needed!

I hadn't seen one single Starbucks whilst travelling in Xinjiang, seeing a place in Kashgar's Old City that remotely resembled a coffeeshop impressed me much. My guide recommended the 'Kashgar Coffee' would be a perfect choice as it stood as the coffeeshops signature drink. Set within a bedouin mud brick building style, it felt as if I was lounging in an Arabian outpost with the soft furnishings that I had bagged. Serving Uyghur Princess Realness! Choosing a walnut tart had to be the one, once the coffee had arrived I was so excited and intrigued to try it for myself! Brewed with a blend of local herbs and spices, my 'Kashgar Coffee' tasted a million times better than any Starbucks Coffee! True, I would have traded that right away! Opting to have another coffee with a Kashgar twist was the right decision, I lounged about in the soft and rich surroundings of that coffeeshop for some time, I wasn't bothered about the itinerary at that point. I had been so relaxed that I had left my purchases behind! Chilled, I retrieved my things. 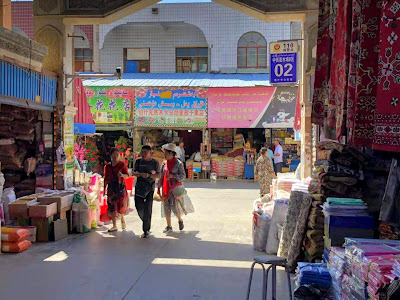 Leaving the noise and tourists of the central area of the city, it was time to see something more less crowded. Adding an extra Turkic vibe to my final day in Kashgar, it was time to explore a market that wasn't touristy in any way shape or form. Locally known as the 'Yeni Bazaar' being the Turkish word for 'New Market'. Not going to lie, I felt as if I was at Fethiye's Tuesday market on the Aegean Coast of Turkey. I didn't buy anything at the market but to simply walk around to see the different things on sale was amazing, the lack of anything Han Chinese gave me the chance to appreciate the local Uyghur style of the market stalls, I was soaking in all of the culture. The presentation of the stalls transported me once again back to Turkey, the local chat sounded the same with the surroundings presented in an uncanny way. Kashgar's new market showed me everything and more with spending any money! Feeling like I wasn't in China once again, it was crazy! Kashgar, you know I loved your 'Yeni Bazaar' a lot! So much Kashgar Kool!

With my flight back to Urumqi, we moved back towards the Old City to have one last meal in Kashgar. Dining at a Uyghur style house allowed me to taste some local food in a homely environment. I was suffering from really bad stomach ache, the week's diet had been mainly lamb and bread. In Beijing, I wasn't used to eating that much bread and meat! I tried my best to enjoy the food but I was feeling the dietary change of the trip. The surroundings were lovely but the pace of the trip had hit me. Making my way to the airport, the car arrived at the airport terminal to find a very strict policy that only passenger's could access the terminal building. The airport security was beyond and then some, it was such a relief to be taxing down the runway for Urumqi! The whole experience in Kashgar during the second day was just as good compared with the previous day. Yes, I was ready for a day in Urumqi before heading down to Turpan. Xinjiang was the gift that kept giving! Kashgar. Let the hotel drama carry on! Kashgar,  bye-bye!