Leaving Baotou at a reasonable time in the morning was fine with me, the short drive away from the city took me towards Inner Mongolia's famous grasslands. Before the grasslands it was going to be all about desserts, camels and a certain pagoda park. Dalateqi was certainly a small town but I found a few things to try out! Yes, Inner Mongolia served up the goods and some camels! 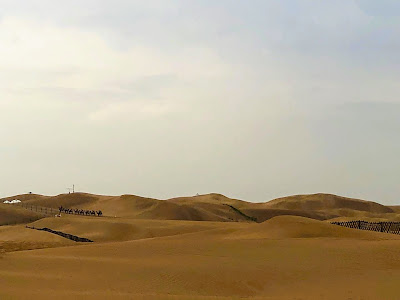 Was I in the Sahara Desert? No, I had arrived at Dalad's Xiangshawan soon after the short drive from Baotou! Known in English as 'Whistling Dune Bay' I was certainly faced with some epic desert style sand dunes that morning! Saying no to the first cable car was a mutual feeling shared with my tour guide, Cherish. We decided that taking the bus would be a better choice, met with a pirate-ship style dune truck led us to the main sand platform. It was near impossible to capture any clear photos during that ride but the views were sensational! It was hilarious to see how some of the domestic Chinese tourists covered themselves up from the sun, it was a cloudy day but they were still cautious not to get bronzed! Camels? Setting the perfect Mongolian theme, I saw an abundance of camels! Taking photos for my students, they were able to join me on my Inner Mongolia journey! I saw some people who were riding a camel across the dunes but was I heck getting on one, no chance! Sure, I had paid those coins so it was my call.

I enjoyed the speed of the dune buggies and for what is was, the warranted the ticket price. I wouldn't usually go on such a thing, but it was holiday and being in such a different environment. It all seemed like a great idea! Finding somewhere to sit, I enjoyed several beers whilst my view of the sand dunes impressed me much. The area reminded me of the Sand Lake in Yinchuan but my Inner Mongolian view looked a tad more touristy and no lake was present, it was a similar contrast but was all good in the end. Finding a place to lounge around for a while with a few cold beers was just what I needed that afternoon. Finally, I could relax! The pace of the itinerary for that day was nice and slow, the morning's and afternoon's activities at the dunes fared to be just enough. I managed to find some mini yurts for my students to discover back at school as part of a new language material! The sand dunes were brilliant, a different for me during my Inner Mongolian trip within one of China's autonomous regions. Oh, sweet holiday! 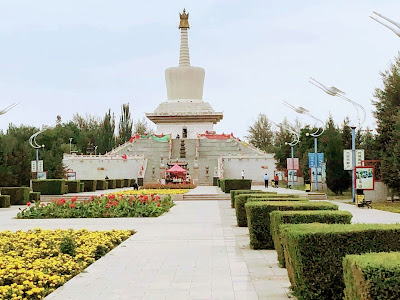 Leaving the sand dunes behind us prevailed to be the best thing, checking into my hotel was a welcomed blessing. The area that surrounded my hotel was quiet. Because things were less than lively I had to make my own entertainment, a few tricks were played that afternoon and evening! Amused for myself for sure, I was afforded the chance to visit Dalateqi's very own Baita Pagoda Park. The mode of transport wasn't a taxi or a bus, I bagged myself a Jaguar ride down to the park in-question. I get what I want, no doubt about that! I liked the ordinary vibe as the local people were shocked to see a foreigner, I wasn't bad about that because I had things to do. The visit to the park was brief but it gave me a snapshot of Dalateqi's town centre, even though the scene was quiet and underdeveloped it gave me the opportunity to get creative with my time. Read between the lines. The fact it was so unassuming of a place, I had my first hotel cancel on me for being a foreigner! Sure that's quite common in China! Dalad gave me something extra!

The addition to the day wasn't planned, I had found the park on my Chinese style TripAdvisor like APP. I would like to think I'm getting good at living in China after almost four years under my belt? It's a learning process! My evening in Dalateqi didn't see me dine at any restaurants, I ordered a takeaway to my hotel and enjoyed it in my room whilst I caught up with of my blogs. The evening was nice, I had no reason to leave the comfort of the room because the weather was absolutely awful, even though the rain poured and poured I had faith the grasslands would still look great the next day! My day had been packed with lots of surprises, sand dunes and a surprise park. Dalateqi's unassuming nature allowed me to further create my own entertainment. Let's just say that for a quiet place I made sure I spiced up my afternoon and the overnight in Dalateqi. With a very early wake-up call for the next morning, I had a very restful nights sleep in my super comfy room, sober for a change it was a welcomed change! Get it, D! 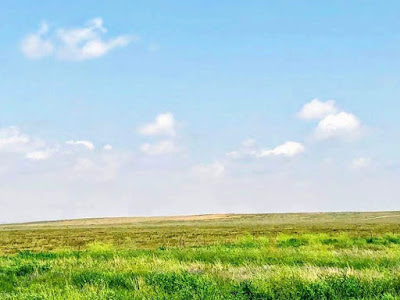 The long drive from Dalateqi to Ordos Grassland Scenic Area neared the final stage, with each mile travelled the scenery started to change dramatically. The lush grasslands and occasional herds of cattle and flocks of sheep sure transported me back home to England. The rolling fields of green reminded me of the English countryside with elements of Wales's greener pastures also. Arriving at the yurt resort was such a relief, I was ready to explore the grasslands and then some! Taking in the lush views wasn't difficult even though I witnessed a mild portion of tourist money-makers, I didn't all of them no mind. Following the raised path took me closer to three Mongolian Yurts that stood in the distance. Taking some photos for memory had to be done, grabbing two lamb kebabs had me conflicted as a little lamb stared back at me! The yoghurt was sweet, I wasn't paying any attention to the cosplay photos that were going on around me. Above all the air quality was spotlessly clean and the sky gave me a perfect blue shade. C, I was living!

The sunshine and the glowing green pastures of the grasslands sent me into a state of chill, it was holiday! I was willing to embrace a certain level of tourist, I called it a day after finding the viewing point after lunch in the restaurant I found some good beer, taking a sun lounger for myself it was time to do some serious relaxing! With an amazing view in tow, finally having some time to relax I kicked back and allowed the sun to turn me a different shade of red! I didn't pay attention to the time because the views were idyllic, the lush greenness of the grasslands surprised me due to the desertification of China's Inner Mongolia Autonomous Region. I was definitely the only non-Chinese person in the whole resort, no lie! How the sun got a little bit too much for me, the blazing sunshine had given me that glow, I needed some shade in my very own yurt before my evening meal. Being in the middle of nowhere in the heart of Inner Mongolia's grasslands made me feel one million miles away from Beijing! Beijing was a distant memory! 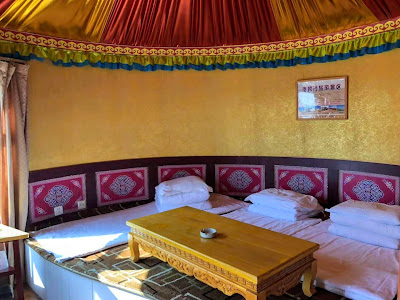 My trip to Inner Mongolia had been a rollercoaster ride, only where the hotel's were concerned because Baotou's offerings were frightfully basic whilst Dalad's room for the night served plush comfort! Deep in the wilderness of the Ordos Grassland Scenic Area, the accommodation was something different for all the right reasons. Personally, I had envisaged my grassland abode to be a family run yurt but the one that I stayed in was formed perfectly for the stay. Travelling solo on a regular meant I had lots of space to stretch out in my own circular room for the night, also I found Wi-Fi in the middle of 内蒙古! Tea was lovely, I spent time talking with my tour guide, Cherish. The conversation was real because we agreed about a lot of things in life, great minds definitely think alike! I indulged myself by having a bottle of Inner Mongolian red wine for the win, it all tasted delicious and with the rich food it was a beautiful meal! I'll go back to Inner Mongolia for sure, let's try other grasslands? Definitely, I have only started things with 内蒙古!

As the night rolled in, the walk back to my yurt was magical for the sky glittered with stars and showcased three colours rather than a blanket of pollution as in Beijing. The cool breeze turned into a chillier feeling, the night was setting in and that was just fine with me. Going back to the yurt had to be done because it was getting late and it didn't seem like any entertainment was going on? I had noticed that the yurts that were both closer to the restaurant and connected to the reception had air conditioning, what for though? During the nighttime in the height of summer season the air was already chilly. Guess that was installed for the winter months? I bedded down for the night, cosy and comfortable with my blankets and pillows in my very own Mongolian Yurt in the heart of the Grasslands of Ordos! The whole time spent in Dalateqi and the Grasslands had been amazing, different for all the right reasons but altogether very freeing to be away from everyday life. No chance, I won't forget that multi-coloured midnight sky! OK!