My Inner Mongolia trip concluded in Ordos, a city that had a series of ambitious plans after the success of 2008s Beijing Summer Olympic Games. I had the chance to see for myself, why Ordos's newest district has been hailed 'a modern ghost city!' Turning back the hands of time, I was afforded the opportunity to visit a mausoleum that paid homage to Genghis Khan! OK, GK? 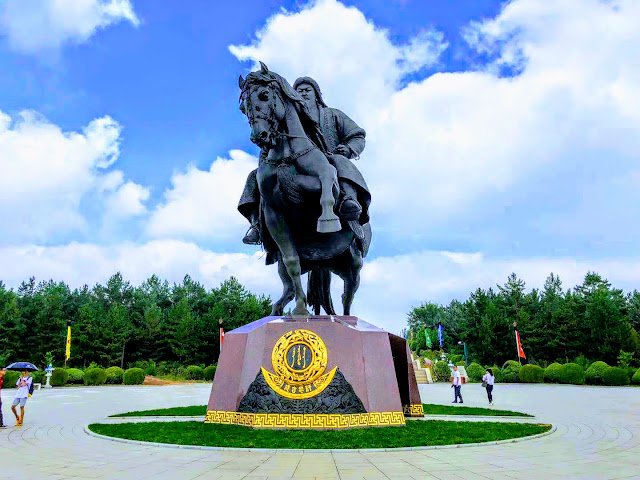 Leaving behind the peacefulness of the grasslands, I was more than ready to see a mausoleum that purely remembered a figure that was strong! The mausoleum didn't house any remains, just possessions and realia. The Mausoleum of Genghis Khan felt like a showpiece exhibition with its 90 something steps to the main hall that housed countless figures claiming to be part of his grand legacy. If the truth be told they were carefully crafted replicas. No shade, I found the whole wondrous story of Khan's heroic Mongolian crusade very interesting indeed! He supposedly had three wives and a succession of children, but during that time his male children only bore value to him. His daughter's would prove him very wrong! Why had Genghis Khan been given this glowing mausoleum? I don't know too much about the history behind the battles he fought, it was safe to say this spectacle was more like a memorial because no physical remains of Khan are present. People did look quite intrigued by the whole thing! O, it was an experience!

Inside the mausoleum all photography was banned, in China that doesn't necessarily mean that rule will be followed by all. In the case of Genghis Khan's place, I saw many of the staff scold people for taking any photos inside the sacred buildings. I knew nothing about Genghis Khan before that visit, as that morning's visit to the mausoleum continued it was really interesting to find out the tales of how the kingdom of Mongolia was fought over and how China's unification made way for their Inner Mongolia Autonomous Region to present day life. I found a rather intriguing monument that was only meant for men or boys to access, it was supposed to bestow great power in all male folk that walked round the circular path three times. If any women or girls accessed that shrine like structure they would be cast with bad luck, taking that warning at face value one woman wasn't aware of the female warning. My visit to Genghis K's Mausoleum was wrapped up with some Montessori goodies! Oh, I found a larger Yurt with a removable roof. 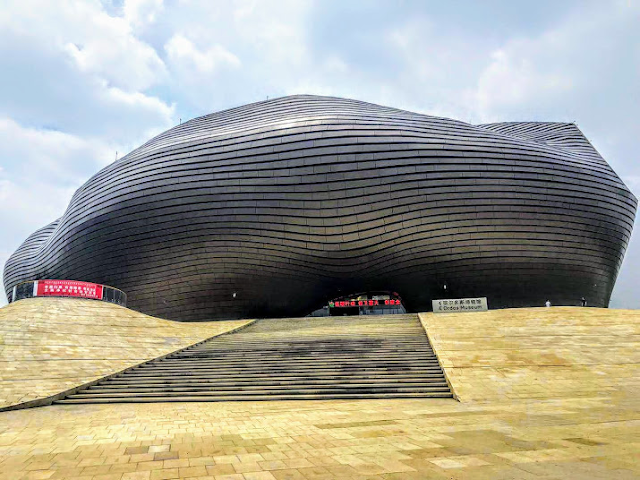 Usually I don't play ball when it comes to museums, but saying that I was intrigued to see within the Ordos Museum for myself. Appearing to be as modern as the year that I was standing in, Ordos Museum received my attention with much interest. Like any provincial museum in China, admission to the museum was free! The museum would show me that most things in Ordos were pretty silent and to use a phrase such as 'ghostly'. Finding the most understandable Chinese exhibition was easy enough, I was transported back to pre-historic China to find out that the first Chinese people actually came from Ordos within China's Inner Mongolia Autonomous Region. The whole exhibition fashioned the history that Inner Mongolia stood as China's version of Jurassic Park, complete with artefacts and pre-historic records for the first Chinese people originating in Ordos. Most of the exhibition was in Chinese, I was able to figure out some of the characters. My tour guide helped me figure it out. Who knew that China had cavemen? I didn't!

The baking hot sun was unforgivable that afternoon, leaving the museum allowed me to see Ordos's Genghis Khan Square. The city centre masterpiece was a vision of a new city that looked brand new, no traffic could be seen nor were many people present in the streets or on the road. A huge government building fronted the head of the square, leading down to a parade of brand new landmarks such as a library, the museum that I had been to and a glistening statue of Genghis Khan. The statue aptly reminded me what the square's name was! I really enjoyed the local Inner Mongolia Chinese cuisine but I was gagging for a McDonald's, there was apparently one in the city but whether it was all for show? Everything seemed quite mysterious, the streets were so quiet and it was like no life could be felt within that supposed city centre space. Genghis Khan Square and the Ordos Museum were bizarre places, both presently beautifully but with no city life taking place. The best ghostly landmark was saved for last! I was about to be spooked! 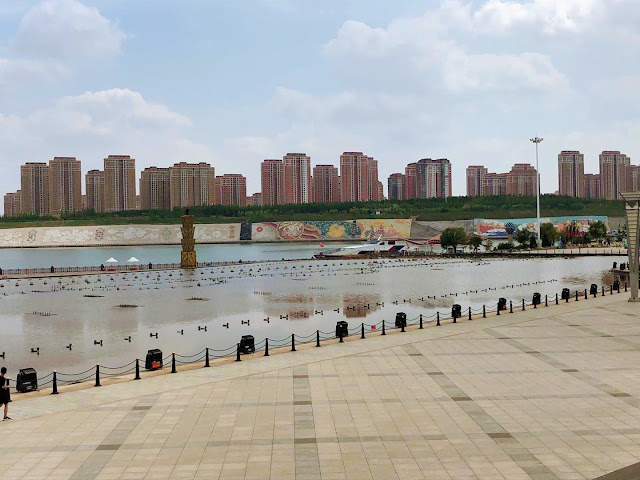 Before going to the airport, I had just enough time to witness one of the most eeriest of sights that I had ever saw during my time in China to date! As mentioned before the successes of Beijing's hosting of 2008s Summer Olympic Games caused a frenzy of construction in the newest district of Ordos City. With a fault in the plan I was able to witness an uninterrupted view of a modern ghost city for myself! At the foot of Genghis Khan Square lay a well positioned line of shiny new skyscrapers, some fronted the logos belonging to a series of well known Chinese businesses. The new development appeared to be frozen in time, it reminded me of something that I had saw in a neighbouring country that possessed no life or buzz. My guide informed me that a hefty price was being paid to keep the silent development looking presentable. It was like real life had been merged with a desolate theme park. The whole vista made me feel uneasy. It was like I was in some kind of unfinished city of the future! No, I didn't know what to make it!

Directly captured above, I witnessed a solitary row of apartment buildings that existed beside the sleeping financial centre that wasn't trading. Those apartments had been built with much anticipation, word on the street was that these apartment hadn't got people living within the units. Driving to the airport allowed me to see the desolate streets that surrounded those ghost city dwellings, the kindergartens looked empty as well as any other businesses could only be seen operating at minimum capacity. Moreover, it was amazing to see that construction hadn't stopped during that scorchingly hot July afternoon. Ordos was mad, beginning with the showcase Genghis Khan Mausoleum to then the pre-historic finds at the city's own museum entertained my alternative touristy side. Finally, the frozen nature of the waterfront city centrepieces and apartments really served up something unforgettable. Arriving back into Beijing was a blessing, lets just say it was an eventful night! C's Inner Mongolia had been great!