Good morning! Being on-time I made the short journey to Yangshuo. I was looking forward to see the greener pastures of the rice paddies and the karst mountains. It was definitely a day to remember for all the right reasons, getting to see the 20 RMB note backdrop was out of this world! Concluding with one night in and amongst Yangshuo's buzzing tourist trap. Go, Guilin! 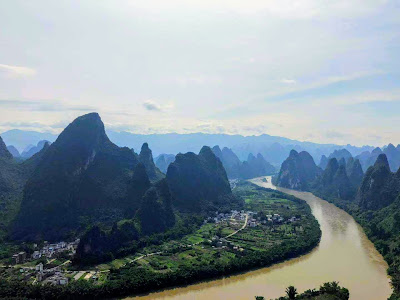 Being an already scenic city, it didn't take long for the landscape to morph into a paradise like view. As my car approached Guilin's Xianggong Hill the vistas were do die for, the glistening morning sunshine gave the rice fields and karst mountains such a heavenly glow. Arriving at Xianggong Hill filled me with a feeling of trepidation, I don't do well with heights so I was really glad the tour guide was going to walk to the top with me. I braved the way up to the top, it wasn't that bad compared to how I imagined it would have been. The views from the top were outstanding, I felt as if I was in another world. The winding river looked amazing, the cloudy vista added a sense of mystery. As with many beauty spots in China, people were going berserk to get a snap of the vista from the top of Xianggong Hill. One individual believed she was living her 'I Am Mariah' fantasy, I think I said '没关系' I had not faced my fear of heights to stand for a said about of time, I am patience but not a mug! 亲爱的, 你不是Mariah Carey? 对不对? 对不起?

The views were outstanding, I won't ever forget those breathtaking sights. It had been a dream to visit Xianggong Hill to capture that iconic Guilin view. No matter how much money a trip costs, if I can see something that was so gorgeous makes every single penny of that price. I didn't spend much time at the top because the itinerary was quite full packed, the growing amount of people making their way to the top also influenced that decision. If truth be told the height wasn't too bad, I saw what I had wanted to see during that Xianggong Hill moment. I'll never forget that gorgeous encounter. Making the way back down didn't take long at all, with the air conditioning on full in the car it was a moment of relief because the sun was really started to beam down some serious heat! So far the morning had showcased some stellar views, with my informative tour guide the conversation was good. We made our way to the banks of the Yulong River in the heart of Guilin's Yangshuo. It was great to be back in China's Guangxi Zhuang! 是! 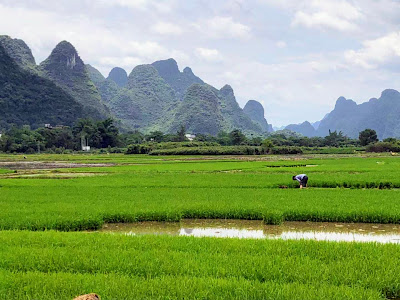 Arriving at the Secret Garden for lunch made me feel like I was in a very touristy environment, the prices certainly weren't local but the break from the hot weather was much needed. Timings were perfect, things continued ahead as planned. Hiring some bikes allowed myself and the tour guide to ride alongside the rice paddies and the fast moving Yulong River. The landscape was truly spectacular, it was amazing to see the rice paddies as I peddled past, to witness the farmers at work was one for the books! Stopping for a little breather, I managed to see a water buffalo cooling off in a pool of water. Sharing some photos and short videos with my students via the class group allowed them to enjoy the experience with me and to learn some English during a holiday weekend! The bike ride was lovely, it gave me the chance to take a series of breathtaking photos. I got burnt, but thankfully it's tanned now! Looking back, the scenery that I saw during the bike ride was second to none! Travelling throughout and within China, I just love it! 爱你们!

How was this trip compared with my initial Guilin tour experience that I took during 2016s Labor Day holiday weekend? Choosing China Highlights for the first time I experienced an amazing day seeing two extraordinary sights within the Longsheng Country within Guilin's vast city region. The Long-Haired Ladies in the Huangluo Village, with their Rapunzel-like nature they showcased their jet black shiny hair for a rather intrigued audience of people to witness. They didn't speak China's standard Putong Hua (Mandarin) because they had their own minority language. Moving on from one spectacle to another I ticked off an amazing feat, I found the courage to walk round the sweeping and very steep rice terraces also in Longsheng County. The misty skies and the glistening water in the rice paddies served a very special and breathtaking view for me, recognising the 'leaping tiger' pose in the paddies I was speechless! For differing reasons both trips gave me magical moments all the same! I had a lot to discover! 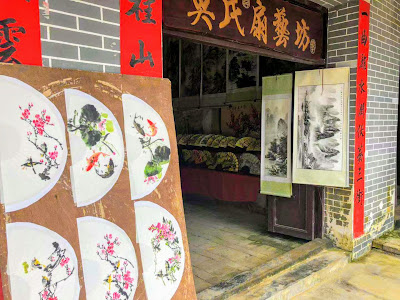 As amazing as the bike ride was, I did feel a little battered by the sun. I needed some water! Arriving in Fuli's Ancient Village allowed me to turn the hands of time back to a simpler period. Stopping at a local fan making workshop opened my eyes into the crafting of Chinese paper fans. Taking some time to see the work that went into making the fans astounded me, the process and attention that the husband and wife team applied to their trade was amazing to see. I was able to try my own hand at making a fan, it wasn't as beautiful compared with the original designs but the experience counted for something. It felt so organic to see the semi-circular paper designs that were drying outside the workshop. I saw the folding of the paper and the inserting of the wooden handles. I totally fell in love with the look of the cherry blossom painted fans, asking for the price I simply had to  spend! Yes, the whole lesson was worthwhile! It was a slice of culture and history in one strike! I later on gave the fan that I bought to a friends daughter! I am kind.

The feel of Fuli's ancient village alleys and side streets gave me life, the old workshops really gave me a sense as to how the local area survived with their trades. Most of all the fan workshop really impressed me, it gave me a sense deeper into Chinese culture and history. That fan will help me cool down during the summertime. The day so far had been memorable for all the right reasons, I was really feeling the heat though. From Xianggong Hill to the bike ride, the mornings and early afternoons activities really set the tone for the tour, it was serving everything as promised, money very well spent! The feeling was right, I was so right to choose to return to Guilin, everything was meant to be. If the truth must be told, this blog was going to be the final Guilin post covering my latest trip but with the sheer amount of things seen I need to make a third! I still need to cover my time at the 20 RMB view within the village of Xingping and the buzz of Yangshuo's West Street! Blessed throughout the day, I was able to see a lot! 桂林的美丽!