Shijiazhuang had already surprised me, owning those small city provincial feels! SJZ served its own concrete style and communist sights! Yes, I enjoyed my first full day in that Hebei City. For that Sunday I wanted to see a respectable amount of places before my Beijing train headed home. Shijiazhuang's Chang'an Park challenged my Chinese skills that Sunday morn! Let's talk! 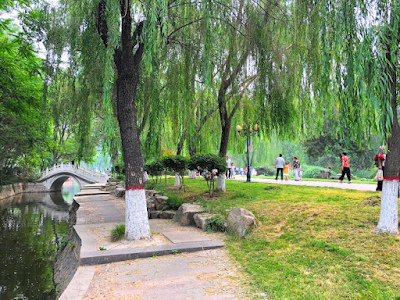 That Sunday morning had me feeling quite delicate, the wine from the previous nights Eurovision marathon didn't leave me feeling good. It was a weekend away for me, I didn't think of it as a big deal! Nevertheless, I checked out of my hotel and headed for some much needed KFC breakfast! Hands down, KFCs in China do a wonderful breakfast, well they get rid of my hangovers! Clutching my coffee, I made my way closer to Shijiazhuang's Chang'an Park to see what was going on that Sunday morning. Finding my way into the park was fine, I had my Apple Maps to show me the way. Things were pretty lively, people were out in their droves and with it being a Sunday most people were off work, justifying the crowds. With the previous nights beverages feeling like a big mistake, the morning's air felt so humid, like it was really humid! Taking some videos of the park for my students had to be done, we were learning about musical instruments, hearing several saxophone's playing gave them a Sunday lesson at the weekend!

After finding a rock to sit on for a moment or two, I was surrounded by local people who just wanted to talk about anything and everything! Beijing's less international environment has taught me that speaking Chinese is more than necessary. Credit due, I live in Shunyi District! Being able to answer their questions felt good, they were immensely interested as to why I was working in China? Deep down they were just curious and for that I wasn't going to dismiss them. It was a rare moment that reminded me that China has a lot of good people, people that are curious about foreigners and it's not all about those who aren't satisfied with our salaries. I enjoyed that moment of celebrity, being the only foreigner within that vicinity caused a slight commotion but I was more than accepting with what was going on. If truth be told, the heat and the distractions allowed my hangover to evaporate conveniently! Feeling content with my visit to the part I was ready to move onto the next phase of my Shijiazhuang Sunday! 是的, 我会中文! 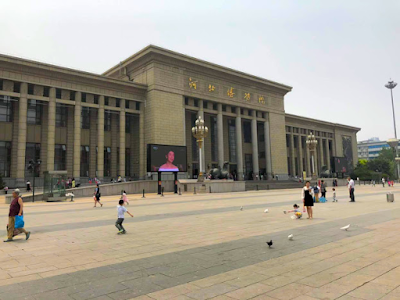 Taking the expanding and relatively new Shijiazhuang Metro a few stops away from the Bei Guo Business District part of town, I found myself outside of the Hebei Provincial Museum. I wasn't expecting much, making the most of the free admission I found some interesting exhibits about China's Inner Mongolian culture. I have a trip planned to China's Inner Mongolia Autonomous Region in July, the knowledge and vivid images got me excited for my trip for sure! The museum itself was really quiet, giving me the chance to browse around the different pieces. I liked the Beijing Opera section, the elaborate make up and colourful dress impressed me much. Blending in with the monthly theme at school once again, I was able to ask the children what musical instruments that they could see through the photos I posted in the class group on WeChat. I always try to bring the learning outside of the classroom, I am sure the parents had something to talk about! The kids were speaking English, being the weekend that couldn't be a bad thing? No!

Taking a moment to think about things, from leaving school on Friday afternoon till that Sunday mid-morning time. The weekend spent in Shijiazhuang had been jammed packed considering I didn't have a massive amount of time on my hands. The previous day had been nice with the planned excursion to Xi Bai Po, but the randomness of the Sunday gave me more life! Ditching a plan, it was nice to not follow an itinerary in one way. Keeping a sense of spontaneity to my Sunday, I definitely think that embracing the local vibe of the park was the right move to make for certain. Aside from the park frenzy, it was crazy to feel like the only foreigner in the city! Beijing felt like a long way from that moment even though the high speed rail links the Mainland's capital with Shijiazhuang in less than 90 minutes. After paying a little more attention to the museum, I made my way to the final Hebei City point of interest. Tracking down a taxi through my DiDi app, I had one more place set in my sights. Sunday served a different way, SJZ! 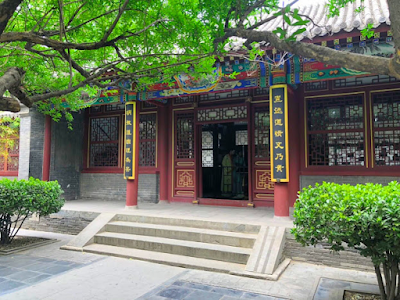 Ending up at Shijiazhuang's Rong Mansion happened to be the wildcard option to add three places visited during my Sunday service. Not the most historic looking of places but it was quiet and the renovated old style looked just as they always do. I took my time to walk around the different sections, it wasn't spectacular but I was seeing something nonetheless! I'm not looking down on Rong Mansion, the immediate area was supposed to be an ancient town but looked fresher than I do without a hangover. I didn't expect much, in that way I wasn't disappointed in the slightest. I had gone out of my way to see six places over two days in a city that's not famous for tourism on an international level, every sight was an achievement. As the working week loomed, heading back into the city centre was the one, my train would be departing sooner rather than later. Rong Mansion wasn't a fail, it represented its own story, all good! I had reclaimed my time, I didn't feel mad before the original dates had to be cancelled. No mistakes!

Heading back towards the Hebei Provincial Museum allowed me to connect with the metro system, linking back a direct route to the train station afforded me with plenty of time to eat before my train. Like a sniper out of nowhere that wine came back to haunt me, McDonald's was there to help me out! Minding my own business I was, a guy approached me with this box and his phone, the box turned out to be his product and his phone was meant for a photo he asked me for to advertise his product. I kindly declined because my Caucasian looks weren't going to be promoting his kit, I had my brand as a teacher to think about! In a non-offensive way I said '对不起, 照片不可以', meaning 'Sorry, photos are not OK'. Departing on time from Shijiazhuang Railway Station allowed me to make my marathon subway journey from Beijing West Railway Station before it got late. The weekend had been one massive success, it inspired me to book another much needed weekend away to Pingyao and Taiyuan, China! Oh, that mystery illness!
Hebei Done!