Guilin was surely the gift that kept on giving, the second visit to China's Guangxi Zhuang Autonomous Region has pushed for three blog posts! 2019s Dragon Boat Festival allowed me to see a series of fascinating places, concluding the itinerary the 20 RMB view was on the cards for sure! My night would be spent in the heart of Yangshuo colourful centre. Such a magical day! 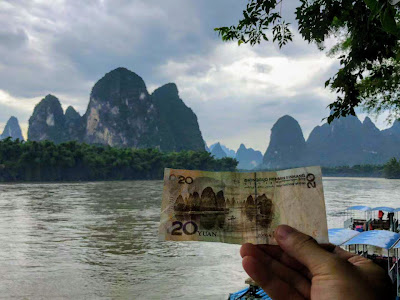 Mother Nature really knows how to through a spanner in the works, during my Yangshuo tour she did just that! The Guilin area had witnessed some really heavy rain, causing the waters to rise. I was supposed to take a raft along the Yulong River but seeing things from my then platform was good enough for me. My tour guide tried his very best to keep track of the local rafting companies to see if they had lifted the ban, things weren't meant to be but he helped me take a great photo of the 20 RMB view. The flowing river, towering karst mountains and the mysterious clouds gave me a winning view. The crowds made me mad, like me they wanted their own memorable photo of that 20 RMB view. Some people really needed to chill their lives out, they were going to get their amazing money-shot without pushing, shoving or just taking their sweet time. Of course I didn't lose sight of what beauty that stood in front of me, I had my tour guide to recommend the best places to take my photo from. China always keeps me on my toes!

Nearing the end of the tour, I had really been looking forward to the final stop of the day. Xingping Village was buzzing during that late afternoon, with the holiday taking its full force the crowds were growing progressively larger. My tour guide had all the right ideas, paying no mind to the people we made our way to a wonderful spot that was in front of a make shift photo line. Asserting ourselves we were able to take that winning photo of the 20 RMB view. In that moment it felt amazing to have captured my third money shot referring to the Chinese currency, securing the Potala Palace for the 50 RMB note and Hangzhou 1 RMB note on West Lake. With the 20 RMB note my third, it's given the motivation to captures the Great Hall of The People in Tiananmen Square for the 100 RMB note. Xingping's magnificent landscape and fast-flowing river impressed me much. All in all, the struggle to the front to secure that outstanding photo was well worth it! In the end it was just a photo, the tour was well worth the drama! 美丽的兴坪! 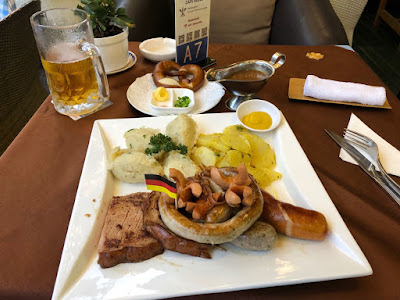 With the tour completed, it was time for me to check-into my Yangshuo hotel, from there I was able to witness the bright lights. My hotel was located right in the heart of the noise, thankfully the hotel room was nice and quiet because nobody's has got time for dawn alarm calls without any sleep! No! Saying goodbye to my tour guide, I would be meeting the driver the following morning to reach Guilin Airport for my Beijing bound flight. Walking into the lights and the noise of Yangshuo's buzzing town centre felt bizarre, from one angle I could see the rolling mountains and in the other the crowds of people who were roaming around. I had heard about West Street, a foreign themed street with international foods and quirky bars but the evening's entertainment for me was going to be slightly different. Only two days away from pay day, my finances were only going to cover my dinner and a drink. Would the night would be a challenge for me or not? No way sister! The day had been full-bodied, I was going to behave myself. Yes!

The day had been long and that McDonalds breakfast and questionable lunch had well worn off by the evening time, I wanted to eat something hearty! Choosing the German style restaurant that had the most delicious looking menu was the one for me! Choosing the sausage platter wasn't a difficult decision for me to make, plus the beers were huge and ice cold! The price tag was reasonable for the portion and type of food and of course the location was another contributing factor, anyhow it was a holiday weekend! I sat back, relaxed with my beer to begin with, the view was filled with a street of busy restaurants who were all trying to tout for business. Before I knew it my monstrous portion arrived, now in China potatoes might be plentiful and cheap but when out for food its always a blessing to have mashed and boiled potatoes for tea! Mind the potatoes, I was living for the gravy all up on that sausage combination! In food heaven, so I wasn't going to pull any tricks or drink too much. Oh, I had my summer holiday coming up! 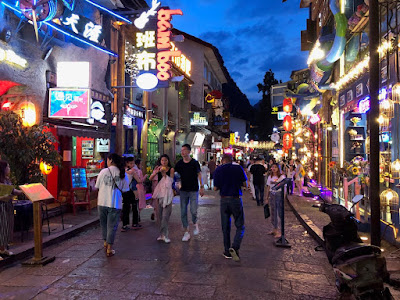 Throughout the whole trip I had kept things cute, not going over my limit with the local beer or any crazy spirits and for that it felt good. Walking along the busy party streets that surrounded Yangshuo's West Street proved to be entertaining for many different reasons. The music bars had gorgeous gentlemen singers, who I saw playing the guitar and singing live very well but their looks and dashing dress sense had me all distracted. The dusk brought the bars to live with their bright lights and neon signage, it was a good job funds were low because I might've got thirsty, very thirsty indeed! Leaving those energetic streets behind, I found a shop that sold the local Guilin beer. Taking a seat along the pavement in a way that didn't make me look like I was homeless, I enjoyed my beer and people watching. People watched me right back, they either got a smile or a sour face depending on their first glance. One can never turn up attention, even though after almost five years in China the curious stares do get tiresome. 我知道, 我是欧洲人!

I decided to call it a night pretty early on, I left the noise behind me as it was becoming louder and louder. Yangshuo showcased itself to me in a very energetic way, I appreciated my opportunity to spend one night within the madness but one night was enough. The whole day had been a very long one, it was time to rest before my early morning drive to Guilin's Lianjiang International Airport for my flight back to Beijing. Waking up before the sun had risen, I had a right game finding my way in the darkness of the early morning but thankfully I found the meeting point. The whole trip had been amazing, up until that point things had gone like clockwork. Arriving at the airport with enough time to clear security and reach the gate felt like an utter relief. Little did I know I would be very lucky to take-off at all, the heavens reopened after the previous days glorious sunshine, thankfully I arrived back into Beijing's Capital International Airport ahead of the schedule. Guilin/Yangshuo, it was amazing! 桂林和阳朔,再见!