Who's Calling? ... It's Shijiazhuang, China!

Life stopped me from going to Shijiazhuang first time round, due to illness I had to cancel my Labour Day weekend trip but two weekends later I boarded the right high speed train. Embracing a city that wasn't famous for international tourism was the gamble I wanted to take! After using my Chinese skills, I truly felt part of Chinese life! That concrete jungle was popping! 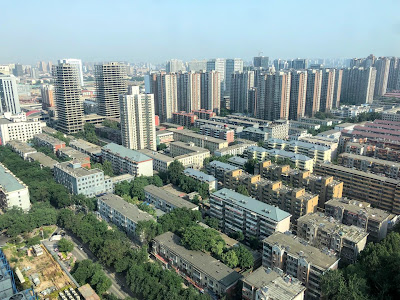 Plagued by horrendous levels of pollution, Hebei's provincial city isn't one of the top ten places to visit in China by mainstream standards. Infamous for its many concrete towers and high-rise residential buildings, I felt there was a connection with a familiar looking council estate setting in England. Shijiazhuang was giving me all kinds of 'Concrete Jungle Realness!' Endorsing this underdog city was the only good thing to do! Arriving the night before to the city's main railway station felt like a mission accomplished due to the original trip having to be postponed due to a mysterious illness that struck me before the Labour Day weekend. I had never missed a holiday until that point, thankfully with being in Beijing it was easy to plan a future trip to SJZ two weekends later due to the close proximity from the high speed train network with a train from Beijing West Railway Station. Getting those refunds processed, I was able to rebook that trip up! Trust, feeling much better I would be sure made the most of Hebei's Shijiazhuang City! Let's go!

After leaving work bang-on the clock, I made my way to my local Line 15 Houshayu Subway Station to take the three transfers to reach Beijing's West Railway Station. Arriving smoothly in SJZ, I dodged the taxi touters at the main pick up point at the train station! Like a local, I found my way out to street level to my relief because it was like a darkened rabbit warren. Catching a DiDi taxi to the city's Bei Guo area, the city itself looked like a huge construction site with the banners advertising new developments. My hotel check-in was fine, if truth be told it was a good job my Chinese skills were on-point. I was sure the staff appreciated that effort? Choosing a centrally located hotel had to be done, not being a famous city allowed me to try something more comfortable for the weekend. Rising early the next morning I unknowingly found a rather concrete panoramic view of the city of Shijiazhuang on my way out. Without any expectations, I kept an open mind to give Shijiazhuang the chance. Sure, I was impressive by that solid vista! 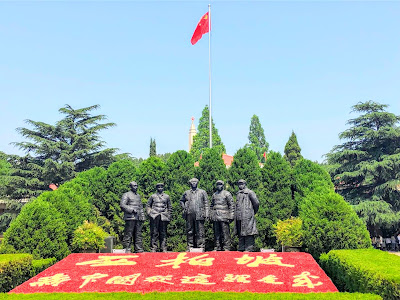 So, everybody should know that China leans on the side of Communism when it comes to the Middle Kingdom's governmental party core values. After doing some pre-trip research for Shijiazhuang, I found Xibaipo Village stood as a very strong contender. Used as the former headquarters of the Central Committee of the Chinese Communist Party. No, I'm not a fan of Communism but there's still some series love for the 'red' way of life in modern China. Taking a private return car trip from my hotel to this Pingshan County 'red' model village had to be done, I had booked a Chinese coach tour but after coming to my senses I asked my friend and travel advisor from a reputable China travel company to help me book a car with ease. The sheer hysteria of Xibaipo amazed me, such places don't exist in England and for that reason it felt like a good thing. I navigated my way onto a fast moving trolley bus that kickstarted my Communist fuelled morning. My Chinese skills came in very useful, much curiosity was shown towards me.

The area surrounding the former residence of Chairman Mao Zedong had a line of excited spectators, same like the line for the Princess's 'Meet and Greet' attracts at Walt Disney World's Magic Kingdom does in the USA! I was staggered to see soo may young people, more over they were so excited and enthused by the whole Communist movement and the whole reason that Xibaipo stood as a memorial. I was stopped by a reporter who spoke impeccable English, being the only foreigner for a good ten miles helped me stick out like a pink plaster in the snow. I told the reporter that certain elements of that location didn't symbol a modern future, having lived in China for a few years that certain practices haven't exactly made space for China's LGBT community. The exhibits around the memorial hall oozed perfect patriotism, more importantly if someone wanted a selfie it was going to cost them a fee! If truth be told, the whole visit was bizarre but throughly interesting all at the same time! It was crazy but I'll represent the LGBT! 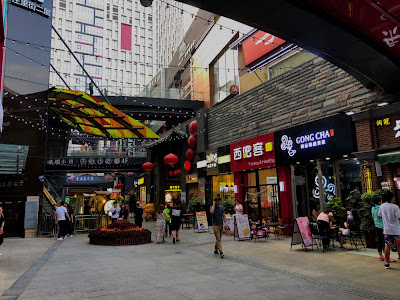 Arriving back at the hotel left me with some time to kill, using some of it however the heaven I felt using it! It went down! Going for a wander had to be done, checking out the nearby Lerthai Center that was attached to my hotel provided some chill and retail therapy. I cannot pack clothes for toffee and the room didn't have an iron, let's just say Uniqlo saved the day for that momentary fashion fixer. Spending sometime that allowed me to chill out with a bubble tea whilst watching the local young'uns walk past. Let's just say the talent in Shijiazhuang proved themselves well. That afternoon was really nice, work as usual had been berserk and after being off sick it had felt like the last few weeks had been mayhem and then some! No bars or clubs were needed that weekend, checking out Carrefour secured the evenings beverages at a much cheaper price. Burger King for tea, I wasn't worried about proper food that weekend! Rewriting the book with my style, I called my afternoon and evening just like so. Oh, I liked Shijiazhuang!

I returned to the hotel for the night, I kicked back with some YouTube to watch the grand final of 2019s Eurovision Song Contest in Tel Aviv, Israel. Eurovision! Relaxing into that evening of wine, chocolate and Eurovision was the medicine that I needed whilst in Shijiazhuang! I didn't want a storming hangover the next day, maybe a sizeable headache would be acceptable but I was in no mood to frequent any nightclubs that Saturday night! For a city that supposedly had nothing to see, Shijiazhuang showed me things that I enjoyed. To be greeted with a new city shared concrete vibes like at home was nice to see, amongst other happenings that wouldn't be appropriate for me to mention. It was bizarre to witness the 'red' Communist hysteria at Xibaipo that gave me a deeper insight into peoples modern day devotion. Shijiazhuang gave me a moment of space, it wasn't a huge city and it wasn't Beijing. I really need to make more weekend trips like I did to Shijiazhuang! Now, Taiyuan and Pingyao are definitely on the cards! Alright?