Refreshed from our long sleep, we had some breakfast then caught a bus to find one of the best views in Nanjing. The previous night out had been brief because I was so damn tired, we knew that it was going to be nasty good later on that night! I was open to pretty much anything happening that day, not thinking about plans was great! Nanjing City slayed for sure! Loving it! 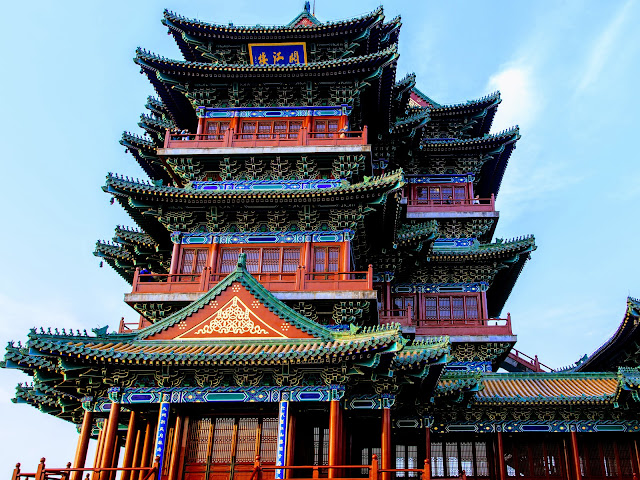 Bussing it to the foot of Nanjing's Yuejiang Tower kickstarted the longish hike up to the top, I am not good with heights but getting it together and directing my efforts to see the skyline of Jiangsu's top city kept me going! Me and Chris just chatted about anything and everything, making our way to the top allowed us to see an uninterrupted view of Nanjing's sprawling CBD. It was no Guomao but in its infancy it impressed me much with its new glass and steel megastructures. The sky was thankfully clear over the main city centre but in the other direction the smog from the paint and chemical factories littered the skies, it didn't impact our views, it only added to the contrasts that Nanjing was showcasing to us. Feeling all nostalgic, the tower itself resembled Wuhan's Yellow Crane Tower but with its own Nanjing edge. Complete with a Yangtze River view that gave me life for certain. It felt great to be near that familiar body of water! Getting back to Jiangsu Province felt correct, I felt a sense of progression in the air. Yes!

Nobody stared at us both for being the 'Laowai's', that felt lovely because we could go about our business, some school kids were so happy to see two foreigners but I shocked them by saying good afternoon to them in Chinese! The views from the top of Nanjing's Yuejiang Tower made everything make sense, we shared our feelings about the nearby Jiangsu Province city of Suzhou. Let's just say our experiences were different, one thing I haste to remember is a KFC Spicy Chicken Burger! Don't ask me! Making our way down the mountain at a slower pace gave us the chance to discuss about our experiences as English teachers in China, our approach to open the minds of the young people that we have the opportunity to teach English. Our jobs may be targeted towards different age groups but we had shared situations that we had both experiences with. Needless to say the gorgeous sunshine set the pace for the day, it was turning into early teatime! Nanjing had me falling fast for its Yangtze River, 2016 seemed like a world away! 是的! 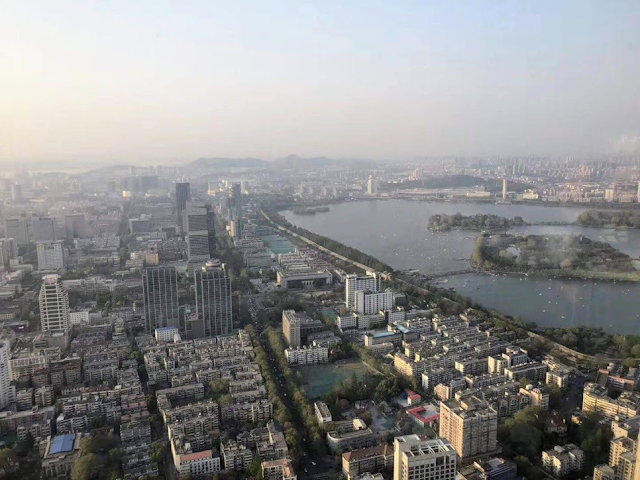 Walking the rest of the way from the bus-stop, we made it to the Zifeng Tower. Originally planning to try some Nanjing food we got our ticket but with the holiday crowds out in their droves it was going to be a lengthy wait for our slot, taking the lift up to the 78th floor within the Intercontinental Nanjing was the one! Making ourselves comfortable within the plush surroundings of the Sky Bar felt correct. With sweeping views across the city, we had the best seats in the city! Ordering the most cost effective bottle of Prosecco sounded like the best idea in the world! Toasting to finally meeting in Nanjing we decided after the first bottle that we needed another one, those dinner reservations weren't really important! Nanjing's Xuanwuhu Lake looked amazing from our view from up above as the sun started to set. Our conversation was getting real, the bubbly was flowing and it was a great time to be alive! Feeling the views from the top of the Nanjing's Zifeng Tower felt the best! Those shenanigans were going to be on fire!

Hitting the streets for some food we weren't fussy in our boozy mood, calling McDonalds for our pre-drinking meal gave us such a beautiful view! Now when we noticed that Nanjing Nan Ren, no he looked like perfection with his designer leather satchel! Our eyes definitely didn't deceive us in that tasty moment! You already know that I was Taobao searching that bag, let's just say I was convinced it was real leather! Going back to Chris's on the Nanjing Metro brought us back to the pungent aromas of Zhangfuyuan! It was time to get our best threads on for the night ahead! Getting my Britney t-shirt ironed and my new blue denim jeans ready, it was set. The night ahead was going to be memorable! Well, with the drink we planned to drink after the bubbles at the Sky Bar the hangover would be the only memory! The day may have started later than planned but we enjoyed the crazy at the Yuejiang Tower, our drinks with a view to rival impressed us during that Tomb Sweeping weekend in Nanjing, China! Ready, it was that time! 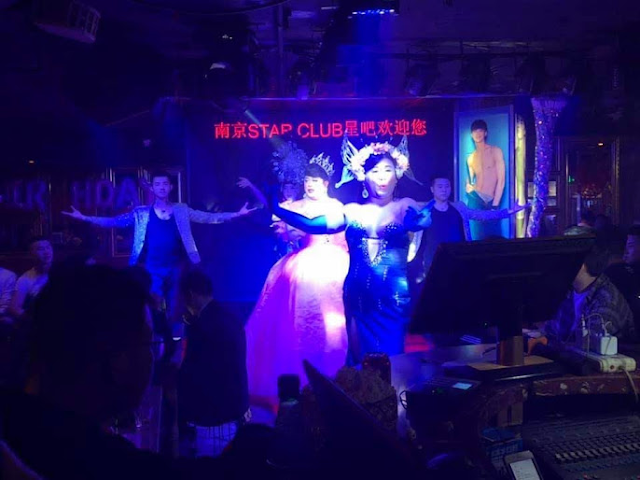 Scanning two rental bikes we rode through the pulsating city centre, dodging oncoming traffic and passing the neon lit thoroughfares, it gave me life! I had heard things from Chris about the place that we were going to that night, approaching an unassuming tower block we took the lift up a few floors, transferred lifts to reach the 21st floor. Finding this sparkly underground Gay Bar in what was probably the space of an apartment rubbished any previous expectations. Star Club was going to bring the drinks and the entertainment that night, I had my bundle of 5 RMB notes from my North Korea trip! I was going to be handing tips out left right and centre! It was going to make it rain! When the place started filling up it wasn't the most refined establishment that I had ever frequented but the vibe of the place was authentic. With our twelve Breezers on the bar, the drinking was well and truly on! I was ready for the entertainment to begin! Nanjing's Star Club was about to serve its very own version of Drag Art, we weren't going to judge! Oh, no!

The Drag performers committed to their routine and served what they intended to serve! They worked their choreography, they played no games! Their lip synching were definitely questionable but their commitment to their art was undeniably true! For the location alone, I was still shocked I was sitting in such a place on the 21st floor within an unassuming tower block in the heart of Nanjing's Xinjiekou District! The drinks continued, we got talking to some guys and what skills I used couldn't possibly be mentioned in this publication, let's just say I turned a few tricks! I knew what to do! Making my debut on the karaoke, I smashed gave my best rendition of Britney Spears's hit song 'Everytime'. The night was everything and more, we drank and had a really great night out in Nanjing! I wanted to recreate some early morning chaos like in Seoul but we had our wires crossed when we rocked up to that shady location. Kicking off because I couldn't get a Jianbing, needless to say it was well and truly time for bed! Oh, Nanjing!