Getting stuck into our North Korean experience, we were in for another day in the DPRK's showcase city of Pyongyang! Dressed in our best and with the importance of the visit well communicated to us, it was time to visit Pyongyang's Kumsusan Palace of the Sun. The day wasn't going remain with that beginning serious tone, no! It was a day full of vast extremes! Go! 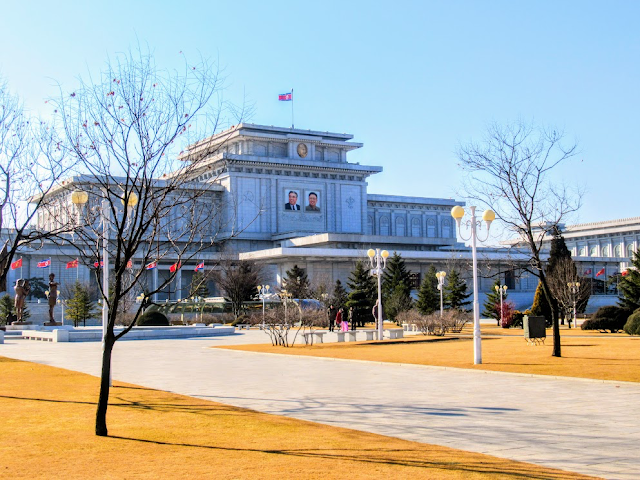 The early wake up call required a few coffees and a snatched breakfast before boarding the coach, feeling fresher than usual it was no joke that all of us behaved well, the mornings itinerary was nothing less than serious! Dressed in our Sunday best for our visit to Pyongyang's Kumsusan Palace of the Sun, the final resting place for the DPRK's former leaders who now rest in state for the North Korean people to pay their maximum heartfelt respects. We had been told that our scheduled visit was something to be thankful for, some other foreigners had been utterly careless with their words so the palace had to be closed to foreigners for a period of time. We agreed with what our Korean guides requests were, it was like it had been written in some kind of law during that morning visit to see such a place that holds such high esteem for the people of the DPRK. Stepping in our straight single file motion it was time for us to catch a glimpse of the NK leaders! I got reprimanded by So Yon for putting my hand on my hip! Oops!

Leaving our coats and cameras behind we remained in our lines, passing through TSA like security screening had to be done. All of us stood with our hands by our sides and not crossing anything was the order of events. Sass was not allowed, I was kindly reminded. Bowing three times from the front, left and right before the late leaders had to be executed with care and respect, we weren't about to get ourselves in trouble for the two rooms that housed the resting leaders were filled with high with emotion from the local people. We passed through vast rooms that acted as memorials for the honorary degrees and recognition the leaders had been given by countries from all around the world, following the same formation like the rest was important. We saw the exact miles that both former leaders had travelled by train and flight through their shared time as the DPRK's leaders. Dotted around every corner were those DPRK male guards in those scarily sharp uniforms, that kind of sight should be appreciated!  Oh, those icy PY winds! 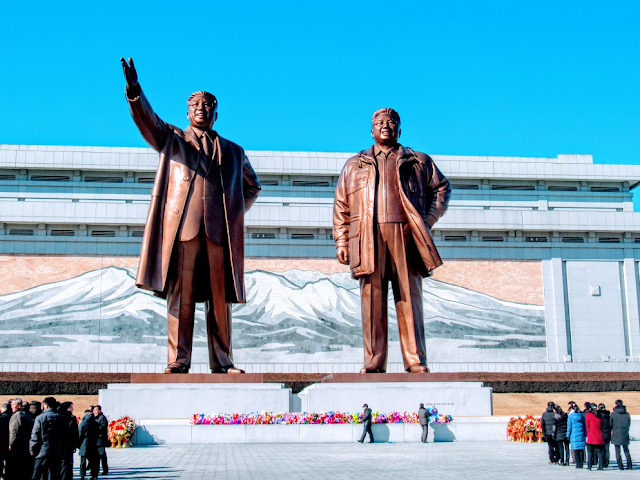 Moving swiftly on to the next calling point during that frozen yet sunny Pyongyang February day, our coach dropped up off at the foot of the Revolutionary Martyrs' Cemetery. Located at the top of Mount Taesong we had unspoiled views across Pyongyang's almost utopian skyline, it was such a view that transported me to the future or what we envisage the year 2070 to look like? I had some serious comparisons in my head, it was nothing like Seoul's skyline, it was very different. The cemetery was set out with a very uniformed fashion, the bronze busts representing the deceased heroic icons of DPRK's past stood ready for us to learn their stories. The stories sounded gruesome and quite frankly awful, it was a swift visit during the A.M schedule, we were freezing at the top of Taesong! Every mountain and that! We were told our mornings schedule had a window of opportunity to see the formidable bronze statues of Kim II Sung and Kim Jong II. I grabbed the opportunity to buy flowers, I wanted to embrace the whole experience! Get it!

Arriving to a frenzy of people who were visiting the statues of the eternal leaders ahead of a very important national holiday. We speed walked to the foot of the huge bronze statues to wait for our turn to bow before the two Kim's. People who had flowers were told to place them with the hundreds of others that had been laid down below the concrete foundation of the two statues. Bowing in unison, then we were allowed to take photos of the bronze statues, keeping in mind that our photos must display the entire expanse of the statues. Seeing the statues put me in my place, it was another key Pyongyang site that I had really wanted to visit! Dinner was really nice, we had our own hotpot creations along with a lovely cold beer and the conversation wasn't bad also! The morning had been hectic with protocol and rules in place, it was nice to take some time out to refuel for the afternoons schedule. The previous nights Soju had me feeling less than pretty, but queue those cold beers K! Hang on! Did I forget something important? Hammer and? 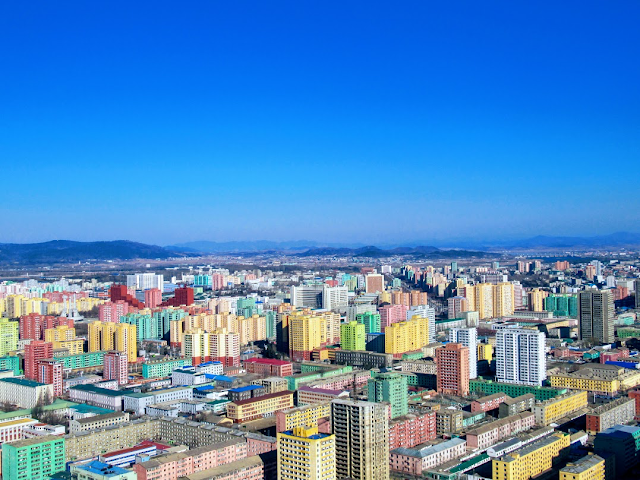 Was it Malima or Cholima? That flying horse statue had us all learning new things, some Chinese words had me thinking! Religion can be viewed differently across the world, treading carefully I observed the ways the DPRK views its faith from what my tour portrayed to me. Some believe in the big JC but in North Korea they stand with another type of J. Embracing 'single hearted unity' as the Juche ideals continue to guide the everyday DPRK folk. Visiting the Workers Party Monument allowed us to see the hammer, paintbrush and sickle that represented the three chosen trades within the nation that we were standing in. We had time to take some photos of that grand concrete monument that I noticed before dinner could be seen from the Mansu Hill Grand Monument where the bronze statues were admiring their city of Pyongyang. Those sub-zero winds were shockingly unforgiving but we were ready to view central Pyongyang from a higher view, up above from the Juche Tower! We didn't have a single moment to waste!

Burning up on the top of the Juche Tower stood a red flame, I had seen that Juche emblem all lit up during the first evening in Pyongyang! Cramming into the lift we ascended to the top of Pyongyang's Juche icon, schooled with the facts about Pyongyang's statement landmark. I am not one for heights but I knew that the eight storey high Juche Tower wouldn't be too high compared to the likes of NYC's Empire State Building, keeping it together I was able to marvel at the contrasting views of Pyongyang from the top of the tower! On the West side of the city it was all about the showcase sites, whereas the Eastern direction gave me all those colours! Our group snapped away at the top of Pyongyang's tower with much enthusiasm, sure the winds had a fierce bite but we fully got into the views! Descending back down to the bottom of the Juche Tower allowed me to find some cultural items for my students, I'm always on the lookout for my kids! Oh, did somebody say Pyongyang Gold Lanes? Of course, let us go bowling DPRK style, P! 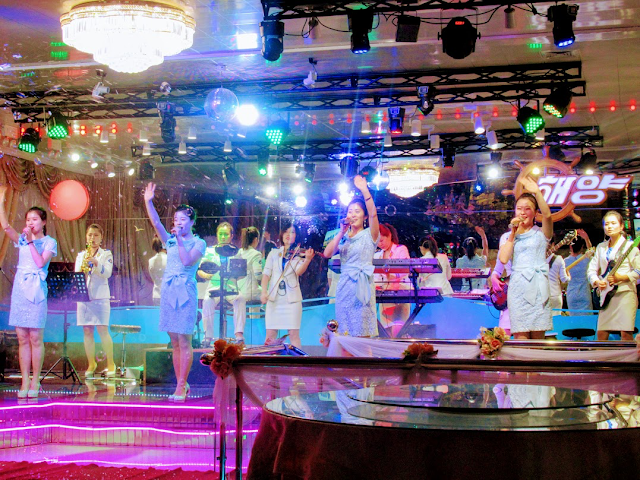 The seriousness of the day melted away as we arrived at Pyongyang's own bowling alley. Some of the group went next door to a coffeeshop, whilst me and five others played one game of bowling. It wasn't about winning, it was all about the experience in that moment. It was the perfect opportunity to people watch, to observe such a normal activity felt quite refreshing and for the price it was considerably cheaper to bowl in Pyongyang that it is in the UK! Regrouping in the coffeeshop it was time to find a beverage at the Taedonggang Beer Bar No. 3, it presented itself as a quiet place but we changed that for sure! Personally, it was a really good opportunity to speak with So Yon, who was our female Korean guide from KITC. The beers were flowing nicely, the conversation was free and we really had a great time at the beer bar! Back onto the coach, it turned into an impromptu karaoke session, I definitely belted out a tune! We were ready for our tea, it had been nice to get a few beers after bowling. Pyongyang was shining, I want to go back!

Tea was at a really nice restaurant, we dined on some really good food and at our tables the beverages kept on flowing and then some! The waitresses halted their duties, presenting themselves as the cabaret show for the meal! It was a full on show with tricks and the opportunity to get up and dance with them, I loved it! The group had been together since the Tuesday and being the Thursday we had bonded quite well, the vibe was really nice! We had stayed out a little later compared to the previous two nights, the previous night we were advised to sleep earlier because of our visit to Kumsusan Palace of the Sun to see the resting eternal leaders. Returning to the hotel, we all descended upon the bar and this time we were all present to have a night fuelled with DPRK liquor and laughs! From our strict morning to our afternoon at the top of the Juche Tower, we ensured the night time was a lot more relaxed! It was another amazing day in the DPRK with Young Pioneer Tours and KITC! Pyongyang kept me on my toes!