Arriving in Pyongyang felt downright berserk, it had been a city that I had wanted to visit since I knew a life in China was on the radar. Stamped into the country it was time to begin my tour of the city with Young Pioneer Tours, for a person who doesn't do group tours I rubbished that mindset! Dinner and drinks started at Ryomyong Street! The power outages caught me out bad! 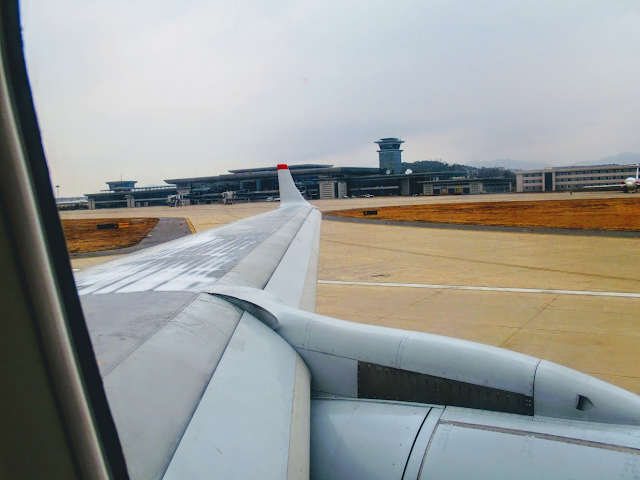 Taking that overnight train to Pyongyang from Beijing? No, thank you very much darling! Touching down into Pyongyang Sunan Airport kickstarted my DPRK Chinese Spring Festival experience, I wanted to make use of my Shunyi address being only 20 mins or so from Beijing Capital International Airport. I would be taking the night train back from Dandong soon enough, my time would come through eventually. Clearing through immigration was something else, I work in China but I'm originally from England so that gave the immigration officer some questions, the uniform put the fear in me! Baggage reclaim at Sunan Airport was done properly, no scanners before the carousel because I caught a glimpse of a sizeable German Shepherd, was that canine worker a sniffer dog? Leaving the majority of my electronics at home made the final screening so much easier, but where was my boarding stub? Who was that lady? It was So Yon, she would be the female Korean tour guide who would mind our tour in Pyongyang, the DPRK!

Reunited with my fellow Pioneers, it was time for us to be escorted to our coach that would transport us for the duration of our Pyongyang City and DMZ borderline experience. Introducing themselves, our guides Jeong So Yon and Jeong Kwang Gwong welcomed us to the city and to the Democratic People's Republic of Korea on behalf of their KITC brand. Moving closer to Pyongyang City centre gave us some immense views, I had watched about one trillion documentaries about North Korea, most of them featured on the showcase capital, I was getting all kinds of North Korean City sights! I stared out of the coach windows with utter bewilderment! Nearing Ryomyong Street we were shown a series of Pyongyang City sights before we had even made it to Kim Il Sung Square, the Arch of Triumph was giving all kinds of Parisian vibes in the heart of the DPRK's provincial city! In that moment I was looking forward to a lengthy break from social media, the sights and sounds of Pyongyang would entertain me! 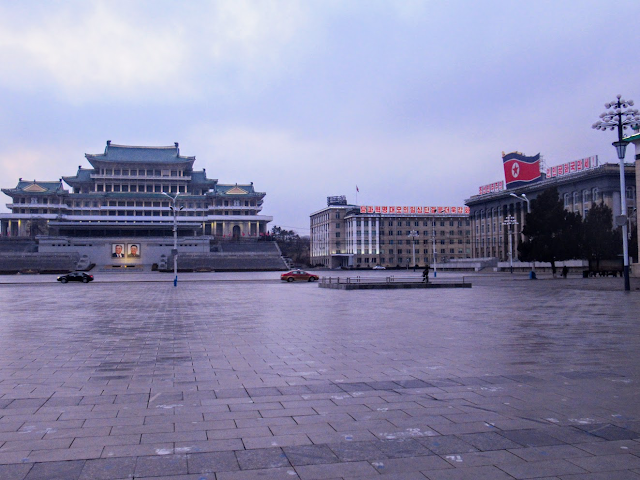 Stepping down from the coach as the afternoon turned into dusk we were fronted by the flaming icon of Pyongyang, being the Juche Tower. I wandered away slightly but with Kwang Gwong's presence nearby. I was going to play by the rules so took my photos of the impressive Kim Il Sung Square with consideration and caution. I got my conservative snaps! Yes, those white marks on the ground symbolised the places people would stand as they marched in the processions, we weren't going to see anything of the sort but it was amazing to see the Grand People's Study House with the two leaders in clear view. On the right I caught a supersized DPRK flag above the Ministry of Foreign Affairs building. The rest of the group had retreated to a nearby coffeeshop, I followed not long after but I needed to soak in some of the Pyongyang feeling in the heart of Kim Il Sung Square. Keeping all of my photos looking O.K, I joined the other Pioneers. To be standing on the banks of the Taedonggang Riverside gave me chills! Yes!

Stepping into the Ryongwang Coffeeshop gave me all kinds of flashbacks from Michael Palin's recent DPRK investigative documentary, the very same coffeeshop had featured in that Channel5 programme. Taking a seat for a little while it gave us flight takers the chance to take stock of the flight and the first few hours in Pyongyang. We had all travelled from different places to make that YPT DPRK trip, it was a meeting of nationalities with Mexico, Australia, England and Scotland all at the table with North Korea in close quarters. Enjoying our hot and cold beverages, it came out of nowhere when the power completely shutdown! I was aware that power outages can be a normal thing in Pyongyang but we as a group weren't expecting to experience one, being fresh off the plane too! Our guides found it quite amusing to see and hear our reactions to the sudden loss of light, they used their phones acting torches for us to see. Paying for our drinks, we headed for the train station to meet the remaining group members. 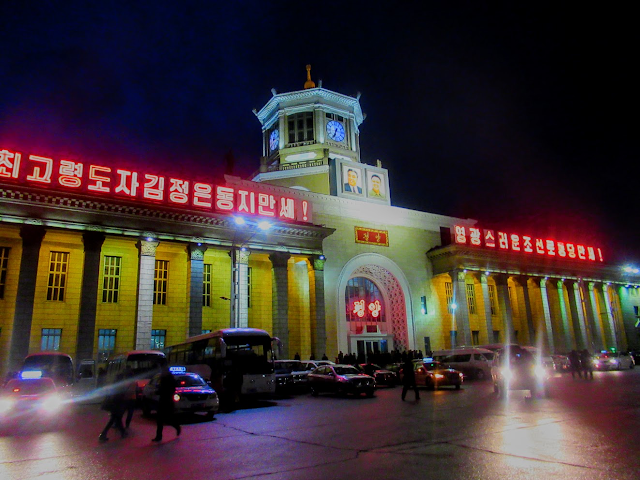 A series of blinding lights and traffic fronted us at Pyongyang's hectic railway station, I had only visited Seoul Station through the metro interchange so I had nothing to compare PY's rail terminus with its southern neighbour. Anyway, we paid 1 RMB to access the platform to greet the incoming K27 train that had travelled all the way from Beijing Railway Station via Dandong and Sinuiju Stations. It had stopped at Sinuiju for the immigration checks after crossing the Sino Friendship Bridge in Dandong, China. We had guessed the train takers would be in a merry state, they had a lot of time on the platform to give them the perfect excuse to drink their poisons! Do I regret not taking the train from Beijing? Absolutely, not! I loved the contrast between Air Koryo's inflight experience compared to their southern sister, Korean Air. The train journey sounded long, my add-ons to Sinuiju and Dandong took care of the train business! Yes! I had been in the DPRK for a matter of three hours, it was turning to be a day to never forget! No!

Now, let me break this down! Some of those DPRK brothers were looking fine! Keeping my nasty side in check, I appreciated the view discreetly because I certainly behaved like a saint from then on during my North Korea trip. Seoul had offered me many midnight and early morning delights of a certain kind. That funky business would be an absolute no-go within the DPRK! Even my mom warned me to remember my location, it was not going to be Korean sojourn like Seoul! Remembering my location, we were ushered to the platform to greet the incoming Beijing train to meet the rest of the Pioneers! Pulling in on time, it took a few moments for the train to make a complete stop, allowing our YPT guide Nicolas Platt and the rest of the gang to join the flight takers and our Korean guides. With the business of 'hello' and 'where are you from?' done and dusted it was time for us to head for dinner. Now, I like a drink but credit to the train goers, they had done a good job by the sounds of it! Well, what a station! The train platform was buzzing! 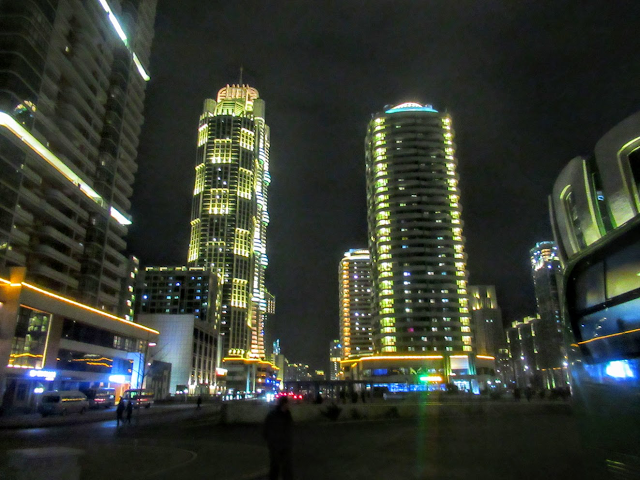 For the flight takers, we were about to revisit one of the sights that had passed us by on the way from the Pyongyang Sunan Airport. Clocking the futurist towers of Pyongyang's Ryomyong New Town gave me a sense of Futurama for a few moments. The day had been long but a good bit of food was in order for us all, that questionable hamburger had worn off well and truly at that point in the day! Learning how to get used to stairs, we found ourselves in this sparkly new looking restaurant with two perfectly laid tables that already had our food waiting for us! Get me a drink, please! Toasting to the holiday I enjoyed a lovely teatime chat with Tori, a fellow foreigner from Beijing. Like a few of us in the group, both me and Tori worked in the English teaching/education game! It was a pleasant introduction to our first evening in Pyongyang, DPRK. We had all been on the move for a long time at that point but the night was still YPT young! We purchased our first bottle of Pyongyang Soju, we were on our holidays so it was set!

Checking into our hotel, we found ourselves at the Nangang Hotel. Word on the street was that other Pyongyang hotels had seen their day and if truth be told the first impressions of our residence for the week were good. Getting those bags set down in the room, it was down to the bar for a night cap or five! I had downed a fair few grapefruit flavoured Soju's in sizzling Seoul but Pyongyang's own non-commercial branded Soju required some mixing, enter Tori she found the perfect mix between the local brew as she added some ice and lychee juice! Claiming that drink 'the Tori' for the duration of the trip it was quite an interesting first night. People were feeling the day, returning to their rooms before midnight it wasn't quite bed for me! I shouldn't be allowed anywhere near bar because things get down right unpredictable! The following days long drive to the DMZ allowed us to have a few more drinks before calling it a night! All in all, the first 24 hours in Pyongyang proved to be fruitful indeed! Oh, Lychee! Oh my living life, PY!