Air Koryo is the airline that represents the Democratic People's Republic of Korea, I had the opportunity to fly with DPRK's airline from Beijing Capital to Pyongyang Sunan Airport on the 5th of February 2019. Koryo's South Korea counterpart, Korean Air and Air Koryo shared a brief moment that morning as both airlines prepped for their Korean flights at nearby stands. Crazy! 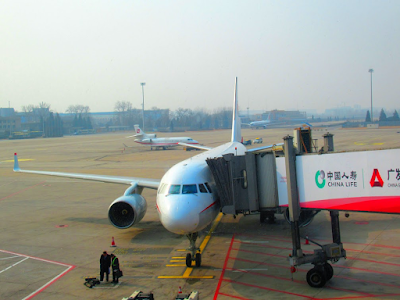 Reporting at the check-in for Air Koryo flight JS152 felt like a very different flight compared with my Korean Air flight to Seoul a few months previous to that February moment. Suited and booted in my best clothes, it felt like the right thing to do. I didn't want to look scruffy after touching down at Pyongyang's Sunan Airport! Things progressed after three Air China passenger service agents brought the screens to light at Terminal 2's international check-in at Beijing Capital. A mountain of boxes stood next to the second check in counter, I wondered how much cargo would be checked in during that check-in period? Identifying a certain business dress and pin depicting a certain DPRK leader, it was apparent this flight operation was going to be very well managed. Meeting a representative from Young Pioneer Tours confirmed that I wasn't the only person on the flight before the check-in started! I was ready to check-in after I had waited for some time with much trepidation for the trip I was about to embark on! I was DPRK bound!

With my boarding card in hand, I passed through China Customs without any hitches. As time progressed it was quite apparent to see the buying power of the passengers who were also destined for Pyongyang that morning! It was very evident to see the tills at the duty-free shops had been ringing with much enthusiasm! After meeting up with two of the YPT tour members at the gate, it was such a relief to see familiar faces from the previous days briefing. Before we knew it was time to board this direct flight to the DPRK, planning such a trip and getting the funds together had taken several months, in that moment it finally clicked that I was on my way to North Korea! Would we be flying on a Antonov A148? We were bound for Pyongyang using a Tupolev Tu-204, that newer looking twin-jet engine gave me some faith for the flight. Hearing some Seoul Gimpo announcements, it was revealed to us that Korean Air and Air Koryo were sharing neighbouring gates! But, did the pilots give each other a wave? Who knows? Maybe, so? 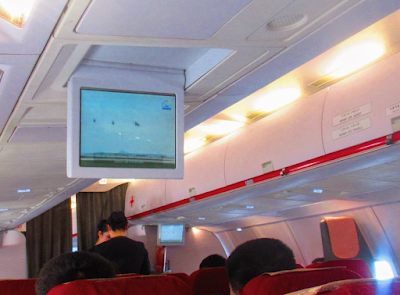 After the epic time it took us to taxi from the gate to the runway we finally took to the skies, it was a really polluted day so seeing anything out from my window wasn't going to be. Did I see a 'manual safety demonstration?' Yes, I was pleasantly surprised to see the Air Koryo crew perform one before take off. Nowadays, it's all about videos and the occasional pointing to the nearest exits, I really enjoyed seeing the pre-flight demo because it was old-school. I must admit that I had watched so many reviews and video reports on YouTube about the airline of the DPRK, well I casually took my photo of the cabin that featured the main cabin area and its surroundings. I had to pinch myself that I was actually on my way to Pyongyang, DPRK with Air Koryo! I was expecting a different order of cabin services compared with Korean Air's offerings but I was open to their differences. Our in-flight entertainment started with footage from the Wonsan Air Festival. Being gently eased into the propaganda, I was alright what that. Let's go!

I was sat next a DPRK Mother and Son, they were sitting in the middle and aisle seats. We exchanged several glances and smiles but for the life of me I couldn't catch their Northern tones compared to the softer Southern accent that I had heard during my visit to Seoul, South Korea. Back to the crew, our all female cabin crew represented their national airline proudly with their stylish black fitted uniforms, their hairstyles were modest with tight buns rather than the usual doughnut style many other international airlines have. I was impressed with their appearance standards, every crew member wore just enough make up because let's be honest there's some airlines that have clowns serving drinks and snacks at 33,000 ft. Their uniforms were the parallel to Korean Air's soft pastel coral blue uniforms, that gives me all kinds of flashbacks to that dreamy looking male crew on KE852! Leaving Beijing's smoggy skies behind, it was going be interesting to see what kind of views would be served to us! Getting back to Korea felt great! 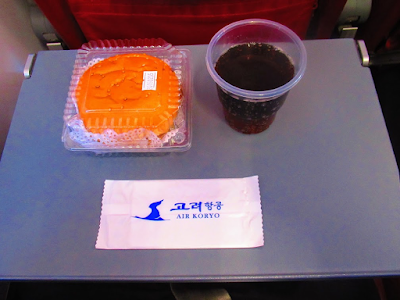 Keeping this kosher for many reasons it's no secret that Air Koryo serves a certain burger for its main meal onboard their international flights to and from the DPRK. Personally, I was quite intrigued to try that dubiously sounding snack! Served through the cabin along with a light refreshment, I chose to drink some Cola. If truth be told the offerings weren't bad, being a short flight there wasn't much need for a full service meal for our Beijing-Pyongyang flight. The interesting tasting Cola reminded me of Lidl's own interpretation of the famous American soft drink. I am trying not to mention any branded drinks! People make a lot of noise, to be fair it was a memorable snack as my Tupolev Tu-204 made its way closer to DPRK's Pyongyang Sunan Airport. Thankfully, I had had a small Starbucks breakfast before boarding the Pyongyang bound flight, it was a good idea because the burger itself was small and being hungry, it was suitable JS! Air Koryo continued to serve me a difference experience on the way to Pyongyang.
No glossy airline published in-flight magazines were found in the seat-pocket that was in from of me, I had a copy of the Pyongyang Times to read for that short-haul sector. Printed in English with some really interesting articles and photos, I was happy to learn more about the recent news from the Democratic People's Republic of Korea. The current leader and his elegant wife had recently made a state visit to Beijing to meet the President and the First Lady, the colour photo that I found on the front page told me all I needed to know about one of DPRK's recent successful visits to China. Several articles promoted the triumphs of local businesses and the efforts of local people who had made an impact within their contribution to their country. I never read newspapers but during that once-in-a-lifetime surreal flight I was more than willing to find something to spill the beans about the DPRK. Judging by the change in the landscape below our Air Koryo aircraft, Pyongyang grew closer! Our descent fast approached us! O' Jesus! 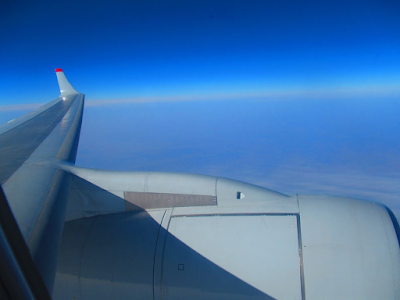 Now, I usually go for an aisle seat because I can have the monopoly when I need to go to the toilet and I always love to pass by the galley to speak with crew or to get extra snacks. That was not going to happen during my Air Koryo flight! Choosing the window seat proved to be an absolute winner, the terrain changed quite a lot as we started to make the descent over the DPRK ready for our arrival into Pyongyang's Sunan Airport. The descent into Seoul was all about getting lost in the collection of K-Pop anthems from the IFE, but my flying experience north of the Korean border saw me appreciate the view compared to being distracted with the sounds of IKON and their 'Love Scenario'. Had it been snowing near Pyongyang? Mostly likely yes, saying that the terrain looked pretty mountainous with patches of green vegetation, well from what I caught as our Tu-204 retracted its flaps ready for landing at FNJ. Before we knew it, our flight had landed safely! Was that a hairdryer I could hear? No, the engines spooked me, B!

Pyongyang's Sunan Airport looked brand new, shinning in the dreary afternoon skies. It was time for me and my fellow Pioneers to take a look and obviously enter the country to begin our tour. With the jet-bridge connected we were allowed to disembark, but was there a DPRK-pop star onboard? A beautiful Korean women was ushered down the aisle before anyone else was aloud to move, now I was intrigued! Presenting my passport, entry/exit papers, customs form & visitors visa card to the guard put the fear into me! My working location and nationality caused a question but that was all innocent and I was granted access onto DPRK soil. Grabbing my luggage once it made an appearance on the carousel and clearing customs concluded by Air Koryo experience. It was a very interesting flight to a new side of Korea, no ads for double eye-lid lifts were present in the terminal though! Meeting our Korean guides it was time to make our way into the city, leaving PY's new FNJ airport behind us. Thank god, I found my boarding stub!