Suited and booted in our best, it was time for the lengthy drive along the Reunification Highway from Pyongyang City to Korea's Demilitarised Zone. The journey brought us face to face with the Peninsula's southern border. Passing through Kaesong allowed me to try something new for dinner and our brief Sariwon hike gave us a higher viewpoint! A borderline unlike no other! Oh! 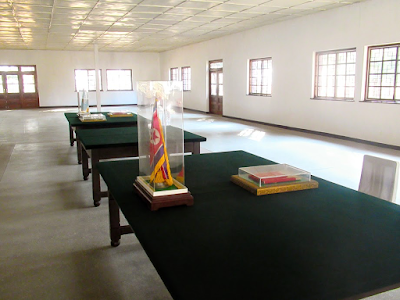 The DMZ had been on my list of places to visit within the Korea's, but Panmunjom isn't accessible from the southern side so my ultimate trip to the DPRK had to be the one. Breakfast was a blur that morning but we all made it down to one of the restaurants for something to eat before we boarded the coach for the long journey to the borderline. Those North Korean roads made me feel just fine and dandy, it was going to be fine! Honestly, I was hanging on by a thread! Passing underneath the 'Reunification Monument' onto the highway that shared the same name kickstarted our journey towards DPRKs boundary with South Korea. After stopping at a bizarre gift shop/toilet venue beside a motorway with no traffic, it was something else to process in my head. Making our way closer to Panmunjom, soon enough we pulled into the city of Kaesong that sits on the DMZ borderline with Paju, Kae's southern sister city. Best believe, this was a borderline never to forget! Let me look at those guards! Fine as hell they were! Yes, K!

Word on the street, apparently the best propaganda posters were waiting for us as we arrived at the checkpoint with the DMZ? Grabbing a few things for my students before being briefed about our pursuit to Panmunjom was the just the thing that I needed! Stepping to the beat we were told to, we made our way back onto the coach to the place where the 1953 armistice was signed, halting the vicious Korean War. Accompanied by a selection of delectable soldiers, I reminded my nasty side where I was in that moment, but those uniforms were something else! The stillness inside the building where the United Nations mediated the signing of those important papers felt chillingly still, it was quite interesting not see the stars and stripes, apparently the folks who were representing the U.S forgot to bring their honourable flag? Our YPT group had the whole joint to ourselves for a little bit, we had enough time to take photos before a HK tour group rocked up at the entrance. I was transfixed with that borderline, no breaking up? No, no! 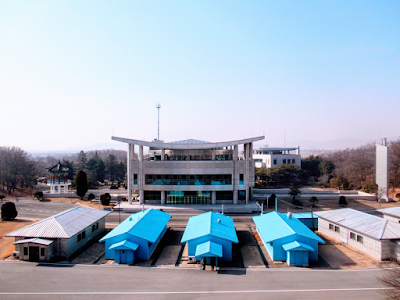 Backtracking to Seoul for a few seconds, I honestly looked at visiting the DMZ from the southern side, but it was all wishy-washy about what days were available. In the present time on the northern side, we approached the viewpoint of those blue U.N huts and the south's sleek DMZ headquarters. We weren't allowed to take any photos of the northern buildings, that was fine with me because from where we were standing it was such a still and captivating view to even take a second thought. Our guides proceeded to point to the location that Kim and Moon had their summit meeting, we were able to catch a glimpse of that powerful borderline marking that the South Korean leader stepped over to begin those ground breaking talks between the two K's, For those of us with Chinese mobiles it was a moment to remember, our phones pinged back to life for a brief second with Seoul mobile signal! I didn't check WeChat! Out of respect of the Korean guides and the protocol, I kept my phone out of view and closed. I knew what to do, PJ!

It was amazing to see the borderline that gets talked about when both North and South Korea's both hit the headlines, to see such a still and calm situation gave me the impression tensions seem to be easing ever so slightly. Up until that point the morning's proceedings had been quite formal and had involved us walking in soldier-like formations, boarding the coach to leave the DMZ & Panmunjom area allowed me to breath a sigh of relief. Learning about the signing of the 1953 armistice was fascinating, it was quite something to see the southern border with such clarity and stillness. The South had served me scandalous portions! The close watching soldiers who were on duty put the fear in me but at the same time they were quite the eye-candy if truth be told. I'm truly thankful that I was too hungover in Seoul to make reservations for a DMZ tour from the southern side, things looked much better from where we were all standing. It was almost dinnertime, heading into Kaesong City took things into a different avenue. Kae, DMzeee? 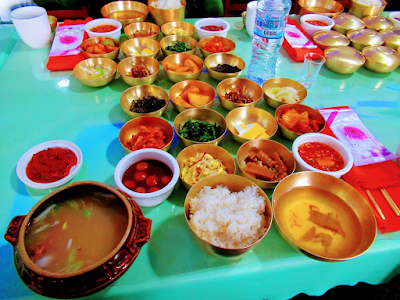 Stopping at one of Korea's oldest educational institutions, showed us all something very interesting, it was on a different level compared with Panmunjom and the DMZ. Known as Sungkyunkwan, during the late Goryeo and Joseon dynasties it was a very famous lecture hall with many other buildings, some of those that shown to us housed many historical relics that corresponded to the time period. Before leaving for dinner it was time for us to see a gift shop that specialised in DPRK propaganda postcards. I bought some for my English Corner, the children can't read Korean but the cards look extremely colourful and each tell their own story. Kaesong stood as a pint-sized city, the buildings were mostly painted very brightly with many hot pink and canary yellow tones served as we approached the restaurant. Like many places in the DPRK, it was a rare sight to see any cars because most people used bikes! Served soon? Yes, I don't believe the entire story has been done justice! Time will see to that in good time. Precisely!

During my South Korea trip during October 2018 I didn't eat any Korean food whatsoever, so being in a place that wasn't commercialised allowed me to be more adventurous! I had done my research, but after those documentaries those gold bowls still meant nothing to me. I was about to cross another boundary, I was ready because it would not happen a second time. Many people assume that I have tried dog meat, people only eat it in China down in the southern parts of the country, during that Kaesong afternoon I had to try the sweet 'dog' meat soup to say that I had tried it at least once. I picked around most of the food, others weren't so keen but it was an experience not to repeated. Diving into the soup, I tried a few mouthfuls of the suspiciously sweet tasting meat. The dog meat had the same consistency as pulled pork with a resounding sweet after-taste, if truth be told I couldn't carry on eating because my late dog out of my head, Murphy was judging me! 오, 안돼! Kaesong, I really need to make that comeback happen! Yes! 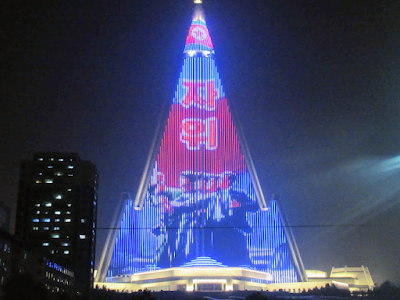 It was time for us to slowly make the journey back to Pyongyang but those bumpy roads allowed us to experience a rollercoaster drive back to the big city! Stopping halfway in a city known as Sariwon, it served true pedestrian style as the apartment blocks served straight up Realness! Amsterdam could take several seats because bicycles ruled the streets of Sariwon. Reaching a folklore park, it was time to climb to the pagoda that was nestled in a mini-mountain, dolled up in my best, those dress shoes made me look like a slippery hot mess as I climbed that mini-mountain so triumphantly! I had business shoes on because we had to dress smartly to visit the DMZ. The views over Sariwon gave me two main flavours, one being Soviet with those concrete buildings representing for miles ahead and the Korean slanted roofs reminded me I was rooted firmly within the Korean Peninsula. Climbing down catapulted us into a sea of curious eyes and wandering youths, sure we foreign folk stood out! Nah, I'll be back to Kaesong! Mark my words!

Pyongyang was in sight, we all breathed a sigh of relief to go through the Reunification Monument, it had been a long day and the drive felt like forever. Stepping out into the drizzle for a few moments allowed us to see a monument that the North Korean people believed would reflect their country's future, one whole and reunified Korea. We had made such good time the restaurant wasn't ready for us, going back for a little rest was the tonic we needed after such a long and interesting day out. Pyongyang Cold Noodles and a rendition of Korean 'Oh, Danny Boy' impressed us with a certain bewilderment, we witnessed a surprise spectacle that was full of signing and dancing! After dinner we managed to stop across the road from the shimmering yet unfinished Ryugyong Hotel, for that moment it stood as a light show with messages and imagery that we couldn't read, it was amazing to see though! Back at the hotel, it was time for another Soju filled night after another full day out in the DPRK! Had I had enough booze? Not quite! No!