India's Ganges: Rollin' On The River!

Rolling on another river, it was time for me to check out Utter Pradesh's section of the sacred River Ganges. Washing my hands in the river was the closest I was going to get to that Indian waterway, others bathed with a mission to be blessed but each to their own. With my sweets, I made my way around the riverside town of Garhmukteshwar! Mother Ganga, I was ready to go! 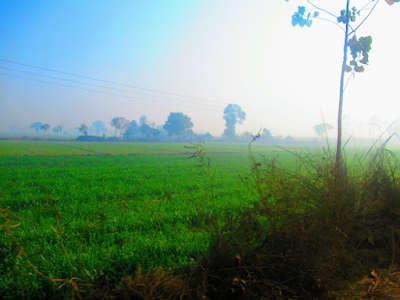 I had just returned to New Delhi the previous day before leaving for another trip, refreshed and ready to see a branch of the holy Mother Ganga the next morning. Booking my trip by chance, my Air India flight was rescheduled without any explanation to the following day. The world works in strange ways, because of the flight change I was able to make another Indian dream a reality. After seeing a three part documentary during 2017 about the mighty River Ganges, I really wanted to see it for myself. The drive out of Delhi took away the crazy, the driver and guide wanted some breakfast, getting myself organised I made sure I had mine at the hotel because history wasn't going to repeat itself, I needed to be calm not salty at the Ganges of all places! So, the expressway turned into country dirt tracks as the traffic towards Garhmukteshwar was apparently getting bad, I wasn't mad though. I was ready for the Ganges! Having the chance to extend my trip due to my unwanted cancellation didn't have me saddened!

Passing small settlements and more cows in the road made my Indian dreams come true. It was a raw view from the car and that was what it was all about for me, to see local sights and people getting on with life. The morning fog hung low, but it only added to the mystery of that part of UP. Getting closer to the River Ganges was a good thing, I wasn't up for another long stretch on the road after my Golden Triangle tour to Agra and Jaipur. I didn't have enough time before leaving Delhi to visit Varanasi but during my pre-trip research period I read that Garhmukteshwar's being fashioned into the next Varanasi due to its close proximity from Delhi. I was smug that I had chosen the right time to visit this Ganges side settlement before the bang causes the boom! Regardless of those facts I was excited to see what the spiritual reasons people revered the Ganga, not understanding much about reincarnation I was intrigued to see if the practices alleviated the way people dealt with grief. Take me to the river! Get it, Mama Ganges!

Arriving at a colourful tented market sure catapulted me into a moment of uncertainty, I was told not to make eye-contact with anyone that I saw, especially the street kids who were looking for outsiders to give them money. The market area proved interesting, I picked up a few bangles that I could potentially use as part of a language material and a framed picture of a goddess, but I don't remember the name. Catching the first glimpses of the River Ganges took me back to seeing the 'Sue Perkins' River Ganges documentary, people were swimming in the river and many people had had their heads shaved, offering their hair to the local temple for some religious reason? Would I be swimming in the questionable waters? No! However, others were more than willing to soak themselves within the waters of that sacred Indian river as part of their religious ritual. I'm not Hindu but I knew about reincarnation, things sounded like a renewal? There's another life for us? India had shown me a lot, I wanted to know more! OK, G?

Paying the equivalent of a few pounds for a boat to take us out along the sacred river had to be done, I then found out that people travel from all over to India to bathe in the River Ganges! The Mother Ganga really plays an integral part in a Hindus life. Crossing to the opposite side, away from the action was a sandy inlet that magically wasn't submerged by the river, stopping for a cup of chai had to be done. It was really nice to hear enough about the river that wasn't exhaustive because sometimes tour guides go overboard with their script. People were bottling the water for themselves, I was fine with the restrictions at the airport regarding liquids but even still I wanted to just take in the experience from a visual aspect. On the way back it was great to catch glimpses of the clocktower and the banks of the river with the boats moored to the rivers edge. Garhmukteshwar was just enough to digest. Leaving lunch for later, I was advised not to eat the local oily foods. Backtracking, there's always time for a cup of tea in India! Oh, of course! 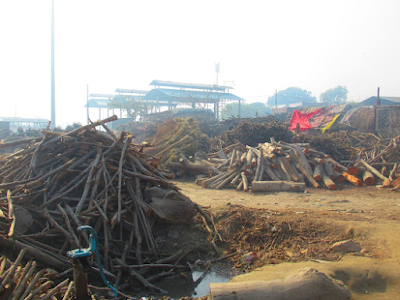 People don't take the dead to Garhmukteshwar for a party, that part of the River Ganges was no different to the others as cremating the remains stood as a steady form of commerce and religious procedure near the waters of the Mother Ganga. Death becomes us and for India's major river it gives the local people business. That is canny! Being respectful at all times, I was cautious when taking photos, I even asked the tour guide if it was allowed in the first place. I didn't see any cremations take place during my visit to the Ganga but the procedure and the feel of the environment gave me a sense that even though the families must go through turmoil, they are releasing their loved ones into the waters of a holy river and the act of reincarnation can fully take place. In saying that I didn't see any bodies float past me as I walked past the riverside, its believed that not every religion believes in cremation before entering the Ganga. In the Ganges it's fine but would a floating body get the same reception in the Thames? I don't think it would?

My visit to the Ganges was almost over, having washed my hands in the sacred waters I wanted to have a little walk around the shops and find some more Indian sweets, getting that done it was nice to see a small shrine next to the main square. Being what seemed like the only foreigner in the whole city made me stand out even more than usual, with the tour guide it was all good but when it comes down to foreigners its all about the local people's natural curiosity. Leaving Garhmukteshwar behind was a nice feeling because I could say in that moment I had visited the River Ganges, throughout that short weeks trip I had seen some serious sights during the time I spent in India. I believe I tried my best to see as much as possible within the closest regions surrounding Delhi. Being able to see the Ganges was an amazing experience, I look forward to seeing another part of that holy Indian river in the future. Yes! Shunning another expensive restaurant, I decided to eat near Delhi Station! Not all tourists are the same! I saved my coins!