Concluding my Christmas holiday, I boarded my morning Hainan Airlines flight from Manchester to Beijing on the 28th December 2018. Having flown with China Southern on the outbound leg of my journey to Delhi, I was very excited to see how Hainan's hospitality would rival other Chinese airlines. More direct routes need to be opened between China and England! 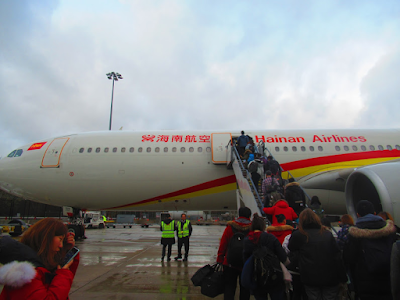 During this second part of my Beijing living I am on the flight path next to Beijing Capital International Airport, being so close I see Hainan Airlines fly their beautiful white, red and yellow liveries across my Shunyi community. Flying back to Beijing, China without having to change planes was a welcome change! Unlike Cathay Pacific Airways' flight to Hong Kong being at their own covered jet-bridge, that freezing December morning saw us being bussed out to a remote stand for boarding, why? Nevertheless, it was like any other boarding for a Chinese airline with a predominately Chinese clientele. How were these people sending WeChat voice messages in England? I need to get myself another SIM card for those trips home! Our Airbus A330-300 stood ready, I had been waiting for quite a while to fly directly between England and China without needing to entertain one of the London airports! Birmingham Airport really should step it the heck up and then some more! The West Midlands needs more connectivity!

Hainan leads the Chinese aviation market alongside Air China, China Eastern and Southern, but I had a lot of faith in Hainan Airlines. Relaxing into that familiar red airline seat reminded me of my domestic flight I took with Hainan from Beijing to Shenzhen during China's 2018 Spring Festival holiday. My second time in the skies with Hainan Airlines would be from an international stance, I was looking forward to seeing the difference between the two services this famous Chinese airline rolled out. Announcements were predominately in Chinese, some were in English and unlike China Southern it was great to see a non-Chinese crew-member in the cabin as the pre-flight checks were being carried out. I much preferred the two-four-two seating configuration and with mine being an aisle it was going to be a nice 9 hours back to Beijing Capital. The flight time had been slashed by 30 minutes, I am guessing the winds were good? Regardless, I was going back to China after my holiday with a good flight ahead. H, let's fly high! 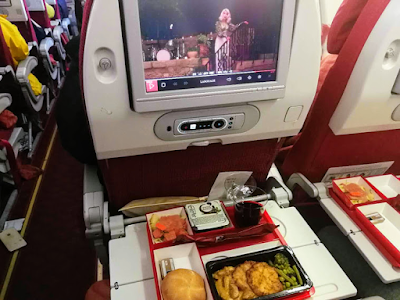 Leaving the British Isles behind us, flight HU7904 soared higher during its direct course to China's capital. Refreshments were being served by the beautiful female Hainan crew members, the male crew members were very handsome indeed! Mine was a red wine, the crew asked their passengers in Chinese mostly but their English language skills seemed better than their other Chinese airline competitors. I was fortunate enough to keep the conversation in Chinese, they appreciated that very much. Lunch/Dinner was served soon after we had taken off from Manchester, menus were passed around the cabin to us passengers, I decided the pork with potato cakes and vegetables was the one for me to choose. The selection was very good, with the menu presenting all options in Chinese and English, it was a truly bi-lingual experience. I was impressed by the quality of the meal, it was tasty! Needless to say it was a stress free flying experience so early on! 谢谢海南航空! Yes, thank you Hainan Airlines! 是, 我会说中文! 回家啦?

I chose to watch Mamma Mia 2, it was one of the international Hollywood movie options that appealed to me the most. I had watched a Chinese title on the way to Delhi, I had already paid my Chinese film watching dues for that holiday. Sipping my wine, enjoying my food and with the hits of ABBA showcased in 'Mamma Mia 2', it was a whole round relaxed flying and dining experience at once. Hainan Airlines was impressing me effortlessly with its warm Chinese hospitality as we swooped through the skies, it was going to be an on-time arrival back into the capital so I had no qualms. It was easy enough to get a refill, the crew refilled my wine during the first part of the flight before I switched to water or juice. Not long after the main meal was served, the cabin lights had been dimmed as the majority of the passengers slept soundly as most Chinese people do. No negatives, every penny spent was proving to be well spent judging by the service and friendly nature of the 海南 Airlines cabin crew. Clearly, I'd fly Hainan again! 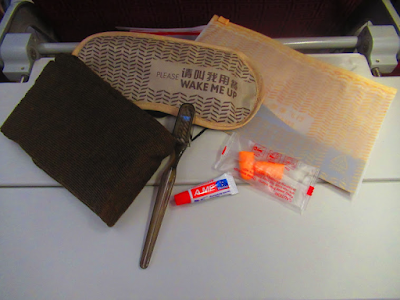 Hainan Airlines's Economy Class offerings impressed me with their simple yet usable in-flight amenity kit, if truth be told I hadn't banked on receiving anything because China Southern didn't. I personally don't use eye patches but they were a nice touch, in actual fact I find it very difficult to sleep during long flights, especially in economy class. The detail on the eye patch was practical and in both spoken languages by our onboard crew. It's not common for a Chinese airline to supply such simple yet effective free amenity to their passengers, that addition to the flight was appreciated. Need I be so careless to not mention, Hainan's rear galley served snacks throughout the flight? Of course, I enjoyed some for sure! Before making our descent it was time for breakfast, I chose the western option. Served with a choice of hot drinks it was just enough before our flight made its descent into Beijing Capital. Throughout the flight the atmosphere in the cabin was calm, that's extremely rare to find on a Chinese airline. Hainan took me higher!

If truth be told I didn't want the flight to land because everything had been so good, but all flights have their final destinations. It felt natural for me to allow the bustle of the cabin to pass me. The Chinese passengers thought the flight was going to push back once more from Beijing, as usual they jumped up before the seatbelt sign disappeared to frantically grab their personal belongings, the crew seemed well versed with this behaviour and beforehand advised the passengers to remain seated for a few moments longer. I live a very short distance from the airport and in real life terms a few more moments waiting to collect my hand luggage wasn't going to cause the world to end! Hainan Airlines showed me a Chinese airline can offer international service with a bilingual speaking cabin crew that communicated well with their guests. Without question I would travel with Hainan Airlines again in the near future, with their direct connection to Tel Aviv I will plan my holiday to fly with them! OK, Hainan? Thank you H!