Air India, my flight almost didn't take off to its final destination due to a breakdown with ATC with Uzbekistan. With its original departure pushed forwards twenty-four little hours compared to the original date, it felt like one almighty miracle to finally touch down at Birmingham Airport. Bollywood movies, curried stews and chilled crew! Air India, just take me back home! 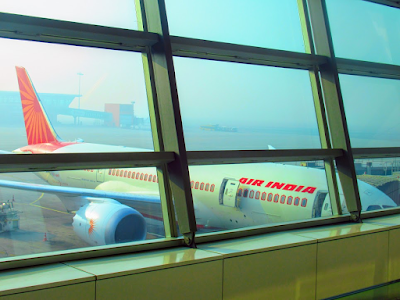 After spending seven days in India it was time to board my flight that would take me to my home airport, Birmingham. It is not secret that BHX doesn't have many long haul direct flights. That specific connection had to be made to make a surprise Christmas! Catching the stomach bug known that rivalled all other stomach bugs that I had ever had before that point I donned by best Indian suit from Chandni Chowk. I wasn't playing when I was told to get flight confirmation from the Air India desk because my Chinese phone had no signal to allow me access to the terminal building at New Delhi Airport, not the fault of the airline but with the way I was feeling it wasn't something I wanted to deal with in that moment. Having previously worked for a British airline that served a lot of New Delhi connectors, I was hopeful that my slightly overweight suitcase would be accepted without any issues. With a shake of the head by the check-in personnel it was accepted blindly. With my passport and boarding cards, I moved on!

Rewinding back the clock two months previous, things were in a different place regarding my travel plans with Air India. Without any explanation my departure date was pushed forwards to the next day and the once direct routing to Birmingham saw my new confirmation detail a brief stop in Amritsar before proceeding onwards to BHX. I had booked that Air India flight along with my outbound flight from China with a third party operator, both flights had changes that altered my schedule. The outbound connection to Delhi from China didn't change my plans but I needed that Air India flight to land before Christmas Eve to surprise my Grandparents! It wasn't good what went down but in the same breath, the extra day in Delhi gave me the chance to see the Ganges River during my visit to Garhmuktesar. Do great things happen in strange ways? At the time the alterations happened I was feeling some kind of way but because all went smoothly after making it home I wasn't so bitter AI. I made it work, thankfully I had time to spare! Stress! 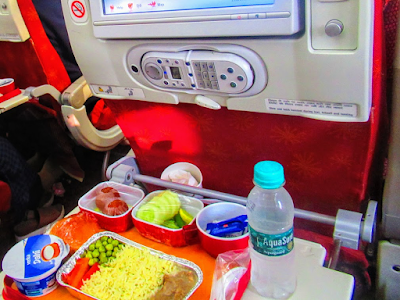 Our Amritsar flight was slightly behind schedule but with the short-hop to India's city famed for the Golden Temple, I wasn't stressed about that! I liked the small snack box and the orange juice carton that was served to the cabin by the friendly and smiling crew members. Flying high towards our first calling point of the day, I was more looking forward to the Bollywood movies and red wine on offer before I would be reunited with my family for the Christmas period, it was going to get slightly eventful. Touching down into Amritsar was fine, it was planned for passengers to disembark and for other to join our Dreamliner onto Birmingham, passports were checked without any issues, cabin bags identified it seemed like that was all that needed to be done? Really? The jet-bridge pulled away from the aircraft, for the bulk of the passengers it was a sign we were finally on our way after being slightly delayed. No AI, it got real! I was not prepared for what happened next, to add I was still feeling like death! I was not playing! No, AI!

Being the weekend Uzbekistan airspace had decided to close due to an aerial procession. To add insult to injury, they weren't responding to ATC at Amritsar Airport. Focus shifted for us being on a potentially very sensitive border with several Middle Eastern countries, a new route needed to be cleared. The alternative mapping for the route to Birmingham from Amritsar took considerably longer to be cleared, with a more complex diversion. The Indian passengers were chilled considering the time we spent sat on the plane at Amritsar Airport grew longer. I was getting considered that Birmingham's airspace would be closed by the time our flight was projected to land. The pilots and ATC were still calmly working out a viable flight plan it decided the main meal would be served before takeoff. I had watched part of a Bollywood film about a typical love story, the twist was that the bride to be had ambitions to work and be successful. Lunch was nice, I chose the curried stew that served with rice and some Indian sweets. Tasty! 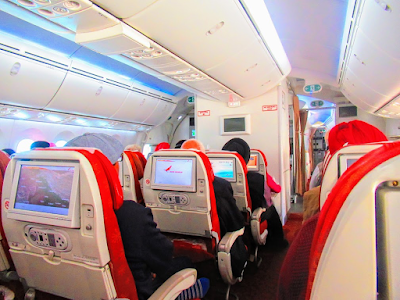 The eventual departure time for the Birmingham sector had to be pushed back, so the actual moment the doors closed for the final time felt more than great! Finally departing, that development made me feel tremendously relieved to be on the way home to Birmingham Airport! Enjoying a few red wines helped me relax into the long flight from to Birmingham, the whole experience to that point had been seriously eventful and quite interesting in the same breath. I had chosen Air India to fly on their Boeing 787-800 Dreamliner, taking away from the delay and rerouting it was great to experience the quieter engines compared to other Boeing aircrafts operating before the Dreamliner was put into business. The B787 Dreamliner had a more relaxed feel with the mood lighting that the crew changed throughout the flight, it was something new for me to witness during a long-haul flight. So all in all, the service was very good once we were on our way! The category was unpredictability with Air India from start to finish!

Yes, If I truth be told I didn't watch as many films during the flight, but the stomach bug knew that it needed to wait to use the toilet until after the flight had landed into BHX. No, literally! The food tasted good, the crew served enough drinks and were helpful when passengers including myself went to the galley for extra drinks and snacks. The extra two to three hours added to the flight really made the journey from New Delhi seemed a lot longer than it was scheduled. Having my flight changed and having to stay in Delhi for the extra night worked out for the best. Arriving into Birmingham Airport before the airports curfew came into rule felt amazing! I really felt that the pilot and the first officer worked really hard to make the new route work out for us to reach our destination without any harm being caused. The crew did their best, considering the situation resolving itself with the hardworking nature of the flight team I would choose Air India again. Really? Yes, I spent Christmas at home with my family! What a journey!